Saving a catastrophe (it is possible!)

Recently I saw, on a facebook garage sale group a post of someone looking for a “local person to embroidery that could do embroidery, with reasonable rates”. Since I had only given things away before, I thought I could claim free as pretty reasonable rate 😉 I was excited about a chance to make a little bit of  money from my hobby. It turns out she was getting married and wanted handkerchiefs embroidered.

I had seen the beautiful mother of the bride and mother of the groom handkerchiefs with delightful poems before. However, as I am not getting married and (until recently) none of my friends were either I hadn’t ever looked into making them. I wasn’t exactly sure on how to do the stabilizers. I told her I would do a test run and see if it worked. I found a wording I liked (good ole’ pinterest!) and did a test run. It looked pretty nice! I used water soluble stabalizer though and when I washed it out it didn’t look so nice…really bumpy and not smooth.

But still I was confident I could do it! I met her and got the handkerchiefs. It turns out they were a LOT smaller than I thought but if I did the embroidery in the opposite corner as the embellishment I thought it would work. Her wedding was three weeks away, I had nothing pressing to do next couple days. This will be fast and easy!  She was going to send me the wording of exactly what she wanted on them. No problem I’ll just wait a bit for that………..and wait some more…….and some more…

I don’t know it is like brides are busy or something 😉 😀  she got it to me with about 4 days before the wedding. Then after I got the message I promtly forgot to do the handkerchiefs! I had other things coming up (kids choir, job orders….trip out of town…) and it just slipped my mind. Ahem, I do that sometimes on rare occasions (okay okay so frequently!) when I finally sat down to do them, the wedding was the next day and there was no time for mistakes!

Carefully I set everything up, checked my stabilizers placed the design carefully to just fit into the corner….and started stitching. Oh it looked so nice! I was getting excited and was calculating how much time this took thinking if it might be worthwile to make these and sell them…..one word done! On to the next word…..wait a minute!!…..oH NOOOOOOOO!!!!! I had started stitching the words on the wrong side of the handkerchief!!! The handkerchief all ready had some decorative embellishment stitched in the corner when I got it, therefore it definately had a front side and a back side.  I was stitching on the wrong side! Stitches are very hard to get out but there was no time to get another handkerchief! 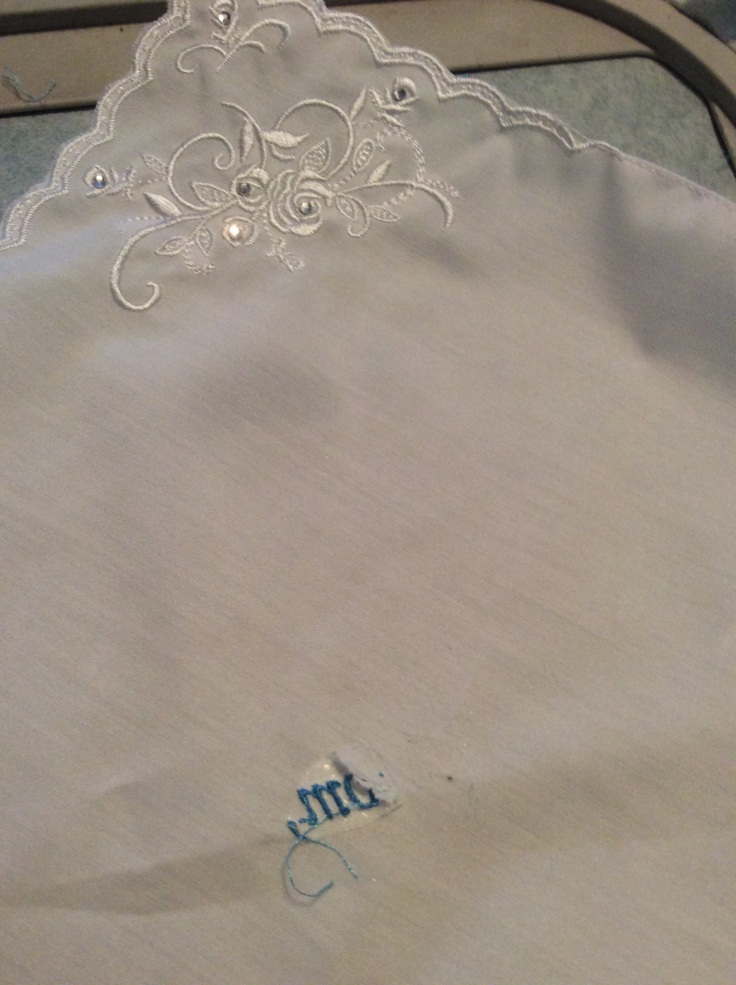 Gingerly I started working away with the seam ripper trying to take the word out. It kind of worked! Took two forevers to get a letter out but it was coming! Then I remembered that I had seen stitch shaver things that were supposed to take out mistakes in stitching. Would that work? I didn’t have a electric one but what about a good old safety razor? I stretched the fabric taunt and gently ran it over the stitches….no miracle…..stitching was still there but there was some extra fuzz of thread the razor pulled off. So I kept at it for a few more strokes….and the miracle happened! It was all coming out! Fast easy and completely! 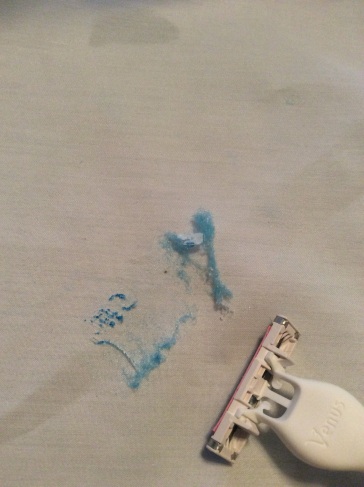 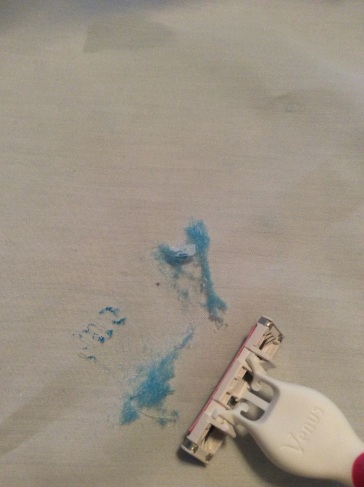 After that the project went off without any complications. 🙂 whooo! My first earned money with embroidery! I’m contemplating framing it 😉  I ended up using a tear away stabalizer, because that is what they had used for the embroidered roses that were all ready on the handkerchief, so I thought it might work best.

I used the built in fonts on the ellisimo using the smallest size. I did learn that not all small size are the same! I used two different fonts for the two handkerchiefs and one was much bigger than the other. Even though both were selected to use the size “small” font. 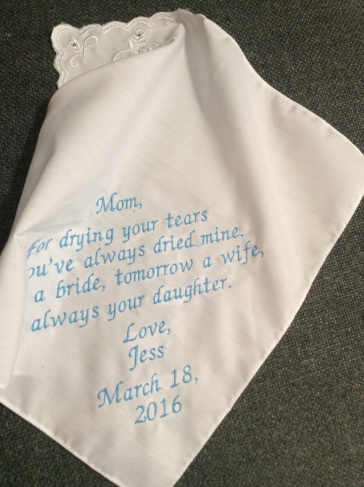 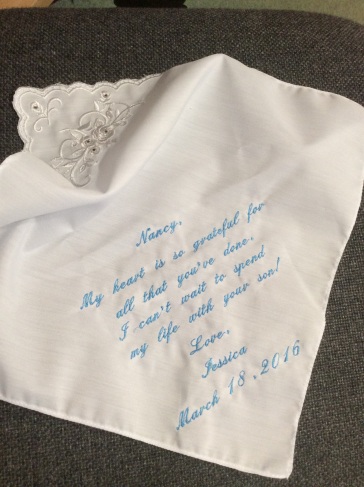 I also also found it was easiest to type each line of the words and set them as seperate designs. So type a line, “set” it than “add another design” type that and set it etc. That made moving the spacing around a lot easier. Then once I have all the words spaced and placed… Leave the embroidery edit and go to “sewing”  camera scan and move the whole design to where it should be on handkerchief. There might be a better way to do this, but This method worked for me. If I was in embroidery  edit, the tendency was to move just one line instead of the whole design.

After I did these two, my friend who is getting married asked me to do some for her too. So I have now made 4 of the handkerchiefs!  I personally would like to have a slightly bigger handkerchief to embroider on, it feels like the words take up too much space….but I wasn’t able to find a bigger size in time to do these. These handkerchiefs came from hobby lobby which made it very convenient to use them! 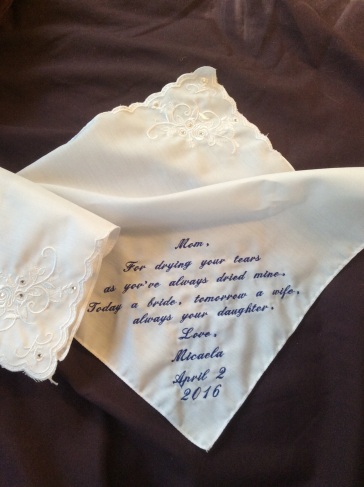 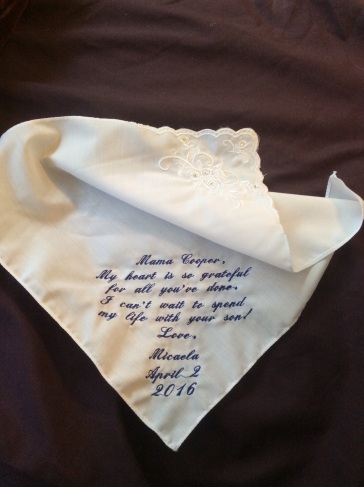