The snow  is coming….

Ellen was not happy about this. She wanted to prepare for the cold weather, after all many kinds of things can go wrong in cold weather.

Debbie on the other hand,  was very excited. She couldn’t wait to see snow and build a snowman.

With very different emotions the two dolls stared out the window, watching the falling flakes and wondering if they would stick to the ground…

“Oooooo, it is coming down harder!! Do you think we can have a snowball fight?” Debbie asked.

“Mmmmph, do you think we might catch pneumonia?” Ellen grumped.

“Awww, Ellen, don’t be so gloomy!” Debbie coaxed. “The weather is going to be what it is going to be, so you might as well enjoy it. Don’t be grumpy….pleeeeease?”

Ellen stared at her and then sighed. “I supposed it doesn’t help. I shall attempt to be cheerful about the impending doom and white death disguised  deceitfully as innocent looking  pretty white fluff that is approaching .”

Debbie didn’t think that qualified as a cheerful statement, but she supposed it was a start and didn’t say anything.

Ellen sat, thought a little longer, and decided to try a little harder.

“It does look pretty when it swirls.” she remarked.

Debbie decided to capitolize on that promising statement… “Let’s go outside!!”

Ellen wasn’t quite ready for that, but Debbie dragged her along.

Soon they were standing outside…

“AHH it is cold!! Where are my glasses? They fell off! I can’t see!” Ellen protested.

“Here, let me find them for you!” Debbie poked around on the ground until she found them.

Ellen was a little happier, but she said the glasses didn’t work well with snow all over them.  The snow was lovely when you looked at the individual snowflakes, but she still wasn’t happy. “Are you sure we aren’t going to get pnuemonia?”  She looked at Debbie and saw that her questions were not going to be answered.  Debbie was dancing around,  spinning, laughing and  squealling “It is snooooooowing!!! It is sticking!!!!!!!”

It was all very well to be excited, but Ellen decided health was about to become a serious issue. “Debbbbiee!!!” she yelled to get her friend’s attention. Debbie came back to stand next to her.

“We have to get our coats, Debbie! We can’t be out here without coats. We could get sick! There is snow stuck in our hair..When it melts, we will get wet. Dolls aren’t supposed to get wet!!” Ellen tried to impress the importance of being warm and dry upon her friend. 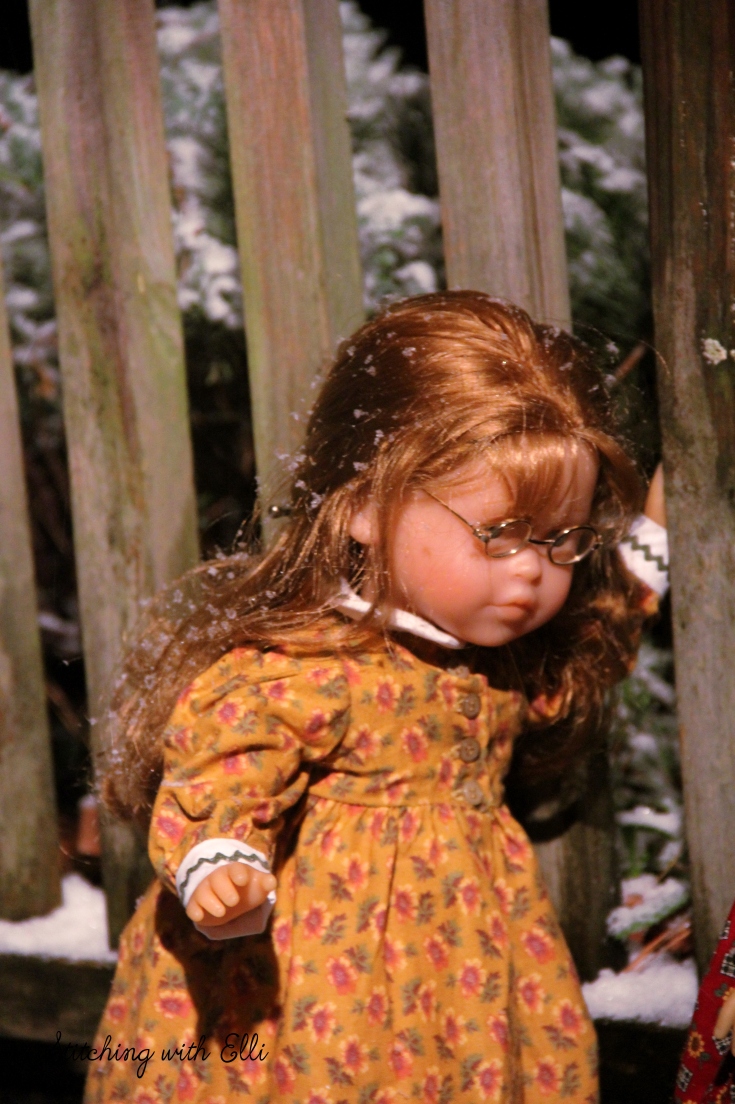 Ellen didn’t understand why Debbie wasn’t understanding how serious this was. “It isn’t that bad!” laughed Debbie “It is sooo prettty!! What if it stops snowing while we get our coats? I can’t go in yet!!” 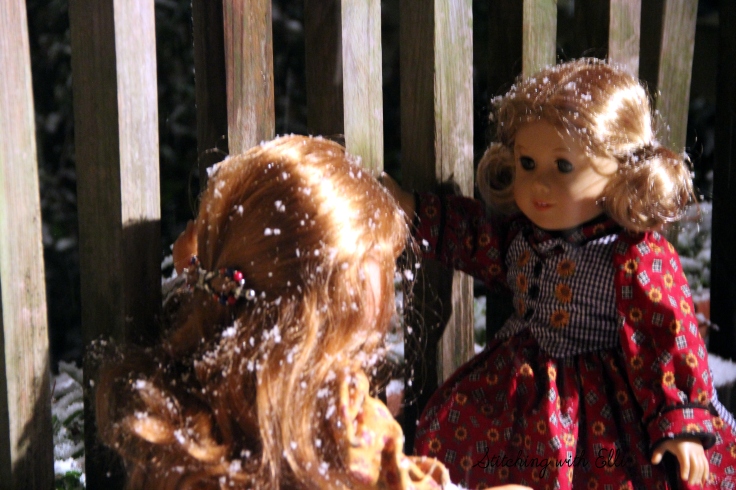 Ellen was not going to budge. There was no arguing with her when she was sure she was right and “protecting” the wellbeing of someone else. So… finally she got Debbie back inside. They both sat inside and watched the snowfall until they fell asleep.

There was snow all over the ground!

Debbie and Lanie dashed outside before anyone could tell them not to. They found a space that had a lot of snow on the ground and immediately began building a snowman. 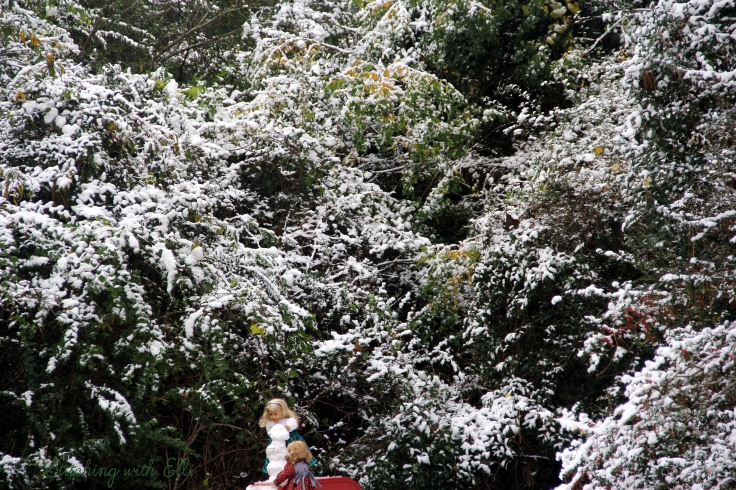 “Does this look right?” Debbie asked. “I thought it would be easier than this. He isn’t very round looking”. She eyed their snowman critically. 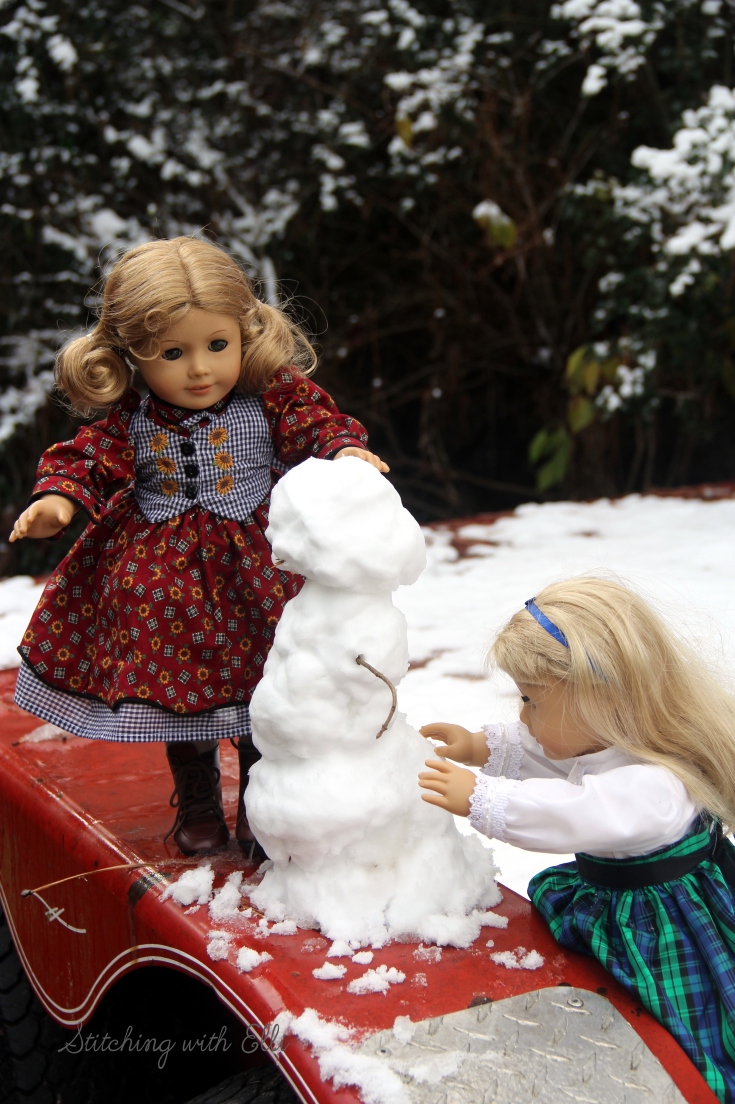 “Well, we can add some more here and here…” Lanie patted more snow in place. “We just need more practice.”

Lanie decided the snowman also needed some facial hair so you could know it was a snowMAN not a snow lady. She tried a moustache first…that seemed to be easier than a beard.

Debbie found a hat in the sewing room…The snowman was complete? They weren’t sure they liked the look. He had a swaggering air about him. Debbie thought he should be called “Zorro” since he had a moustache…but Lanie said he wasn’t handsome enough to be Zorro. Maybe more like a “Snidely whiplash”.

In the meantime, Ellen had woken up and seen all the snow. She didn’t like the look of it but  decided it was her duty to go check on Debbie and Lanie . Plus, she had promised to “enjoy the snow” and that might require going outside in it. Bundled up in her coat and hat, she headed out.

The stairs were more tricky than she had anticipated. It was cold…and slippery…She was thankful her ankles couldn’t twist!

“It is a good thing I’m a Texas doll. I don’t think I would like living with this white stuff all winter ” she muttered to herself as she slowly and laboriously climbed down the steps then started off down the path. 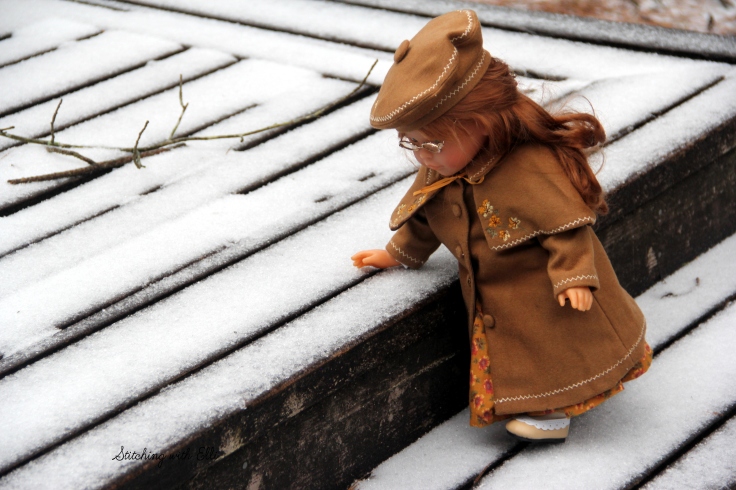 She was making good progress. Almost across the snowy bridge she paused…The slope looked treacherous.

Slooowly…..Carefully…..one step at a time…..

BUMP! Down she went! 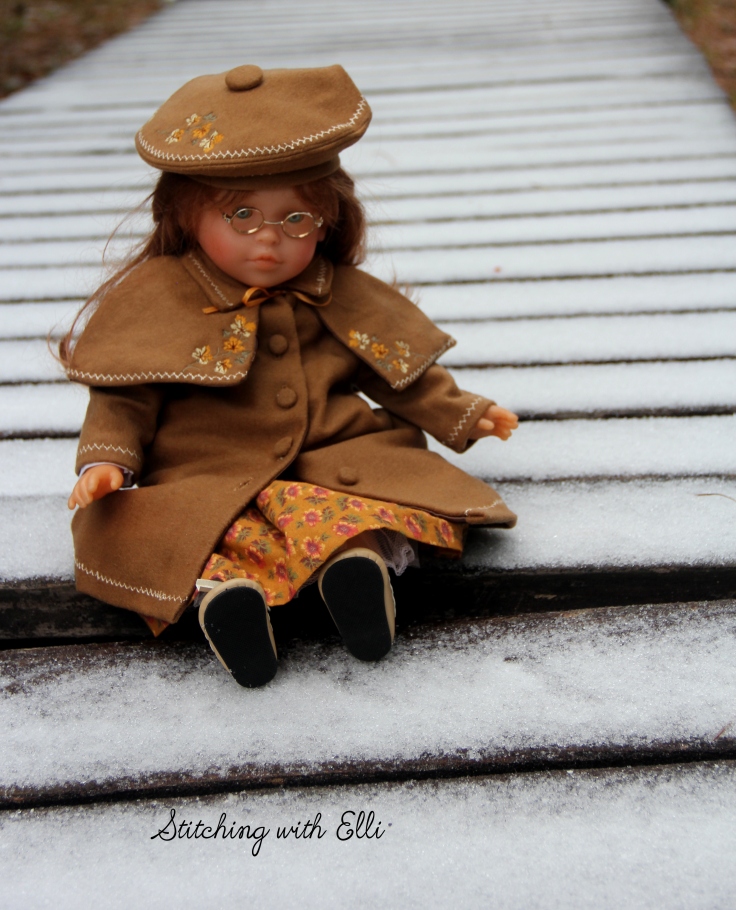 She did a quick mental check to make sure nothing was cracked. To her surprise, she was just fine, but continued to sit there . She was was thinking. After thinking for a while, she decided this was about as much “enjoying” of the snow she wanted to do. Sitting on the couch with a blanket and hot chocolate would be much more enjoyable. Snow wasn’t as dangerous as she thought, Debbie and Lanie would be fine without her checking on them. She got up, about faced and headed for home and blankets…her snow excursion accomplished. 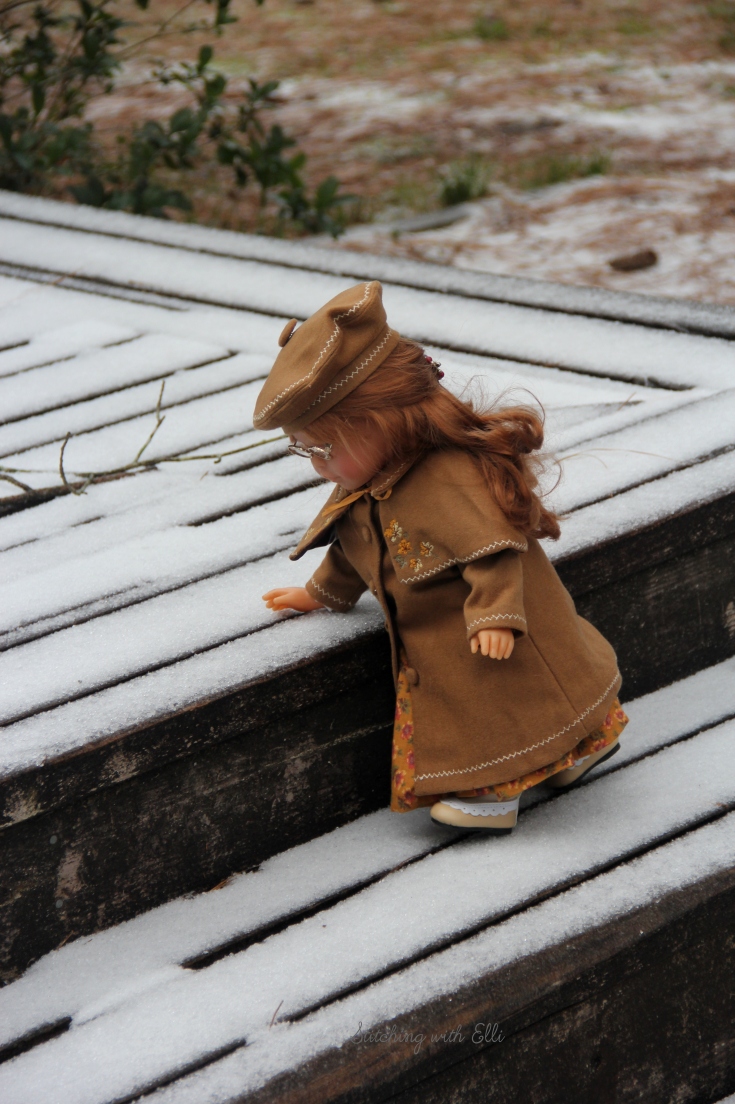 Debbie and Lanie were still enjoying the snow.  Though the snowman was done…they weren’t satisfied. They decided his mouth didn’t look right….so the creative work continued.

“Where did his other button go?” Lanie stared at the front of the snowman. Debbie spotted it on the ground…it had slipped off. Snow was more slippery than they thought it would be.

Once they found the button, the next debate was over the eye color. Debbie favored blue eyes and Lanie liked brown. They tried blue…. 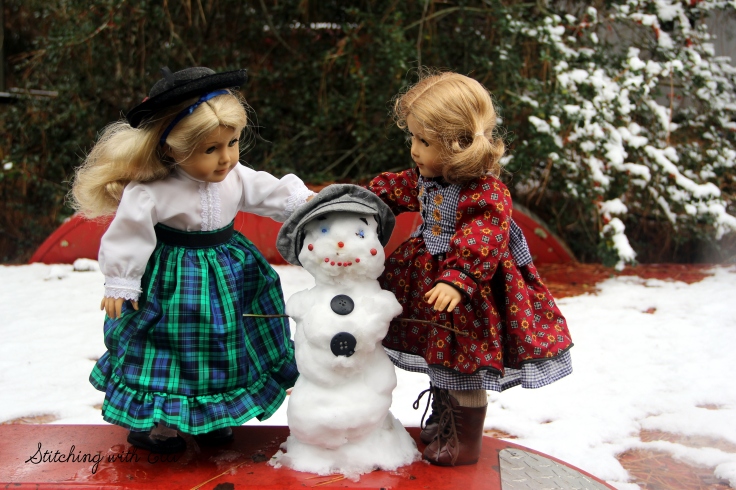 “That looks a little creepy” Lanie said. “The blue would be okay, but they look too small. Snowmen don’t look good with beady little eyes.”

Debbie reluctantly agreed. So they went back to brown eyes made from pieces of pinecone.

“Is he done yet?” Debbie asked “My hands are getting reaaaallly cold.  In fact they are past cold. They just hurt.” 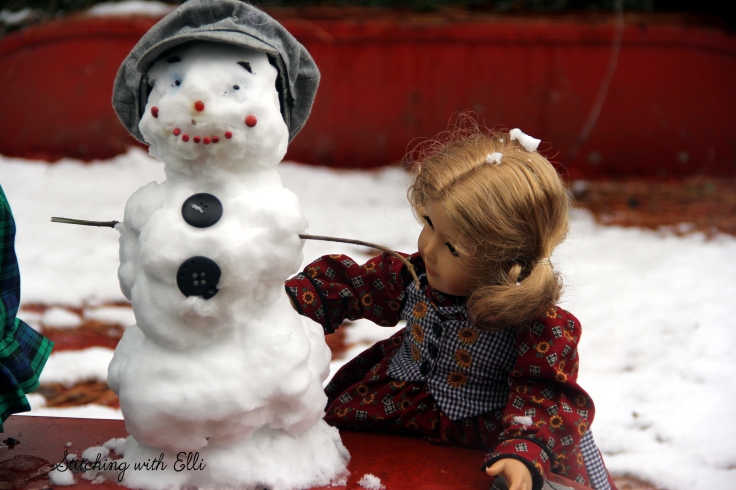 Lanie’s hands had been aching too. She just hadn’t wanted to mention it first. They took one last look at their masterpiece…. 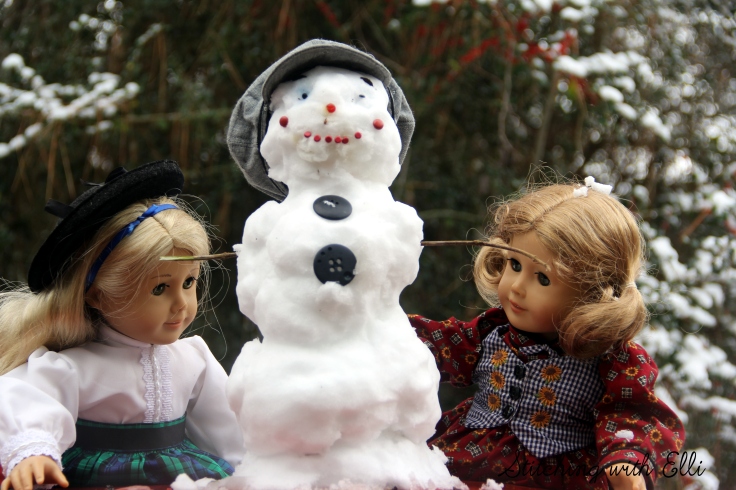 Then they headed for home…and blankets….and hot chocolate.

But …they did chase each other, throwing snowballs all the way back to the house 😉

3 thoughts on “Snow day in Texas?”