It looks like someone is researching a new hobby/topic. Ellen certainly has a big stack of books on gardening and farming to read! 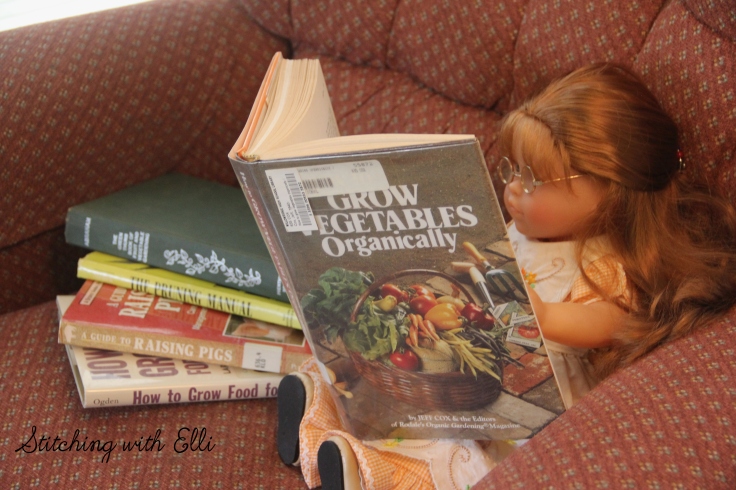 Lately Ellen has been very interested in having a farm. I tried to explain that dolls would have a hard time taking care of full sized animals. From the gleam in her eye I think she regarded this more of a challenge than an impossibility. However, for now she seems to be focusing on the “crop” part of farming.

After you do your research, it is time for action! Ellen decided that in the best farmer tradition she was going to start getting up early. This morning, she decided to do an inspection tour of the current gardens.  She needed to make a To-do list so she could direct her “troops” tomorrow for a gardening work day. (Personally I suspect she also wanted an excuse to use her new clipboard…but she wouldn’t admit it. )

First stop was the pea garden…. 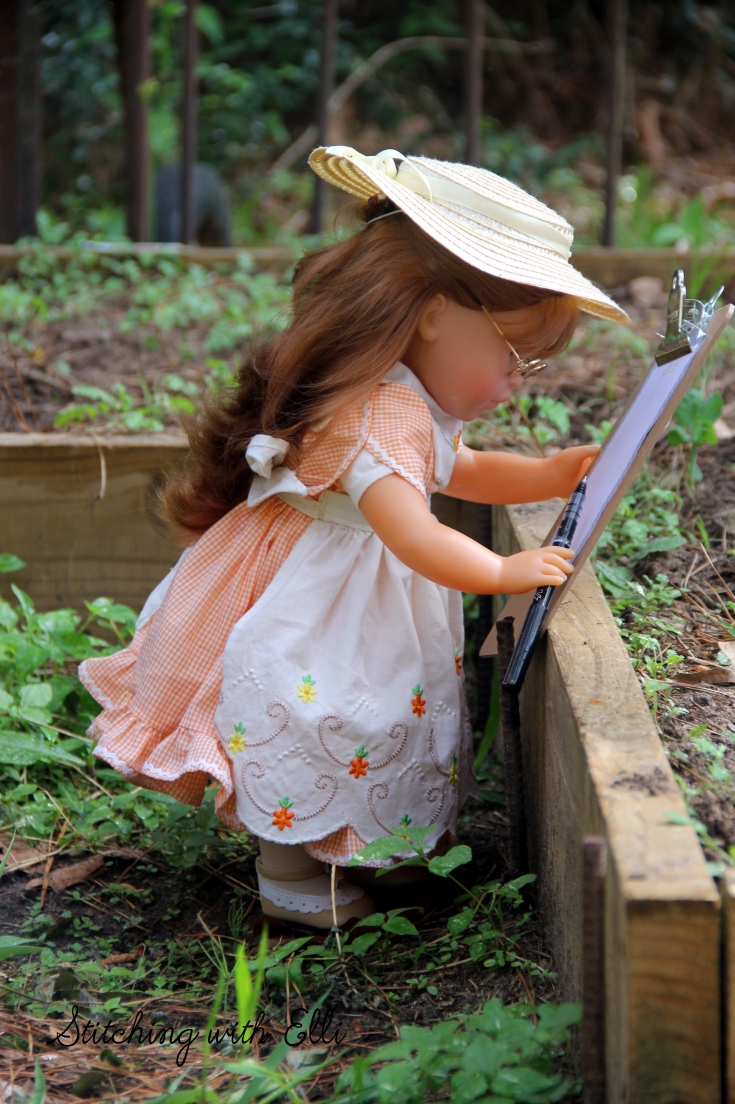 Ellen thumped her pen on her clipboard, thinking….where to even start? The bed looked very messy with little weeds and pine needles mixed in with the dirt. She didn’t like untidy beds…but the books said that pine needles could work as mulch. Perhaps they should leave the pine needles? But the weeds definitely needed to go! 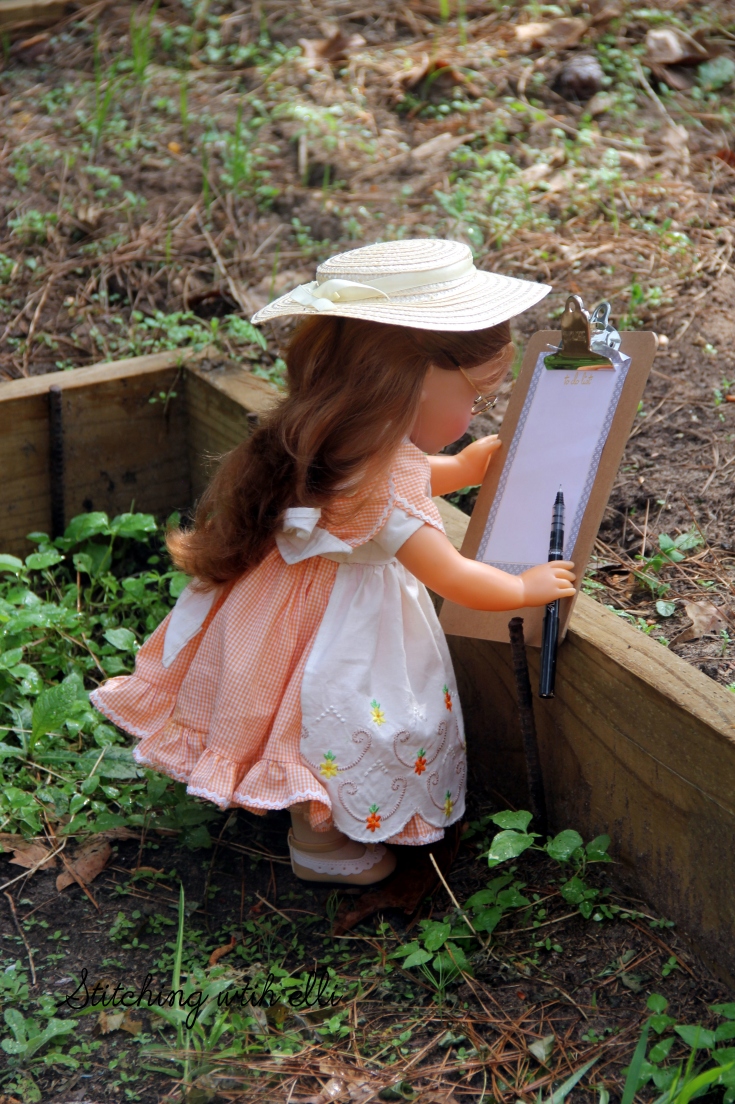 She decided to just write “weed the bed” and then explain later to whoever got that job that they should tidy up in general. Ellen bent to inspect the little plants that were growing. She thought seeds were just amazing…so much life coming from a little dried seed. 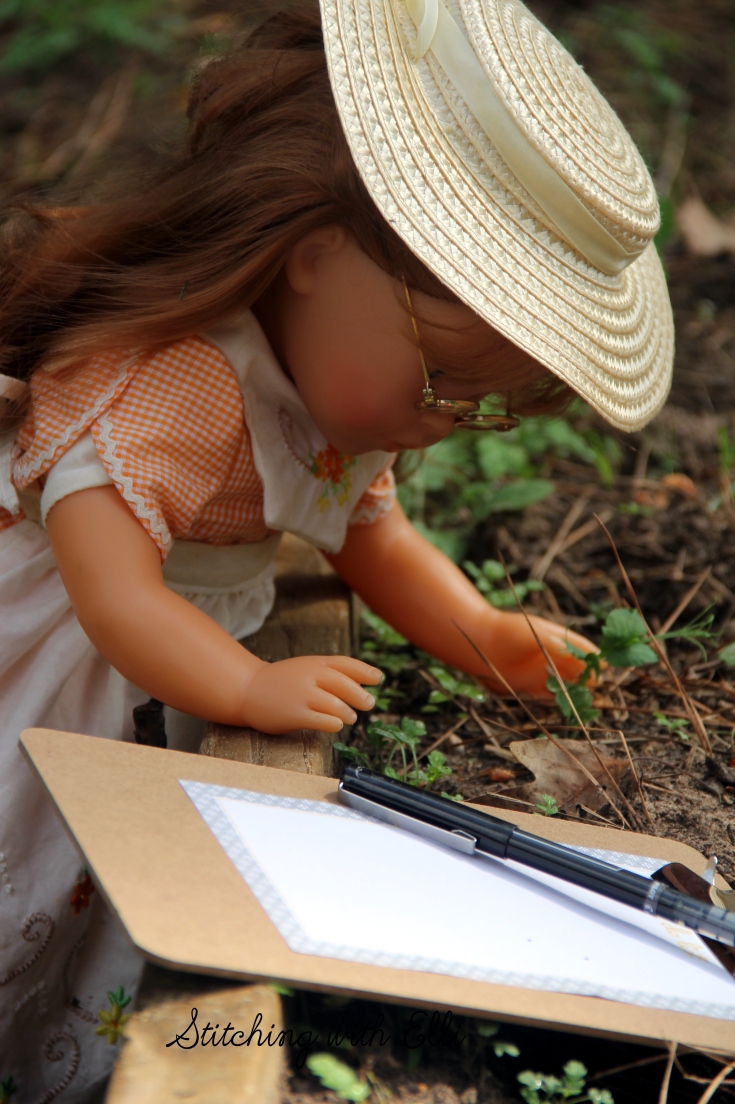 She decided the peas were progressing nicely, and didn’t need any further help other than weeding.

Picking up her clip board, she headed over to the roses.

“I’m glad the roses are being healthy and growing, but it makes it hard to see the leaves and stems!” She was trying to see how many buds were forming. 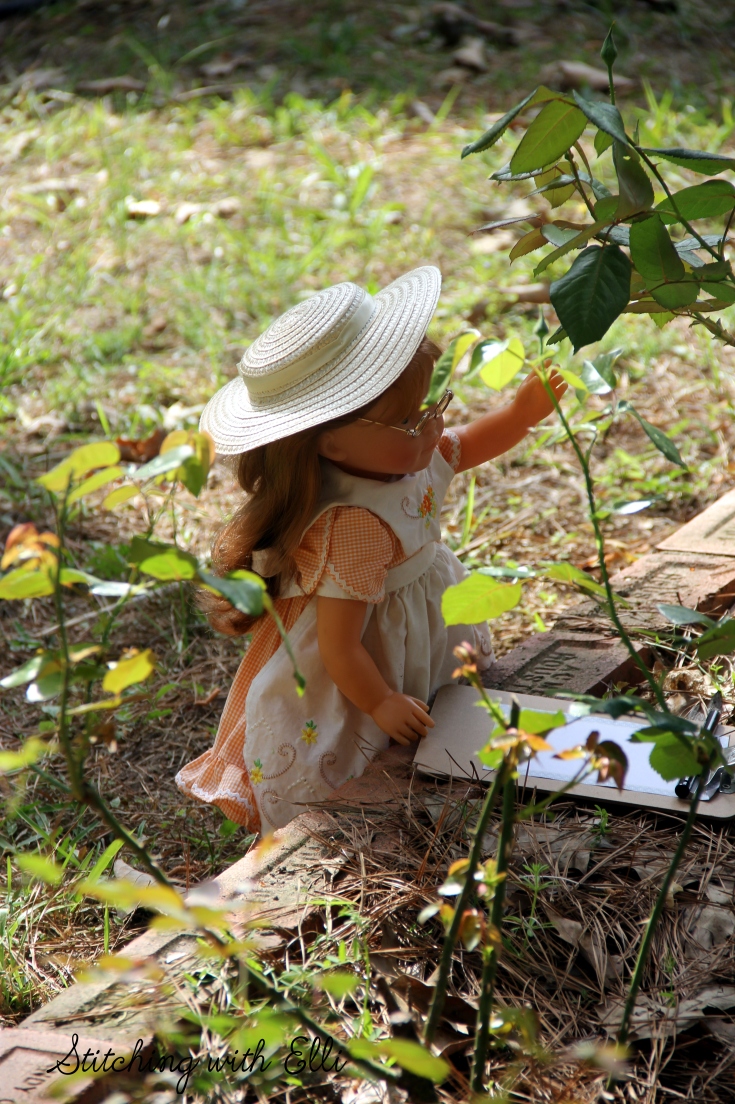 Two for sure on this peace rose bush…but then she gave up because she didn’t want to break any stems by bending them. 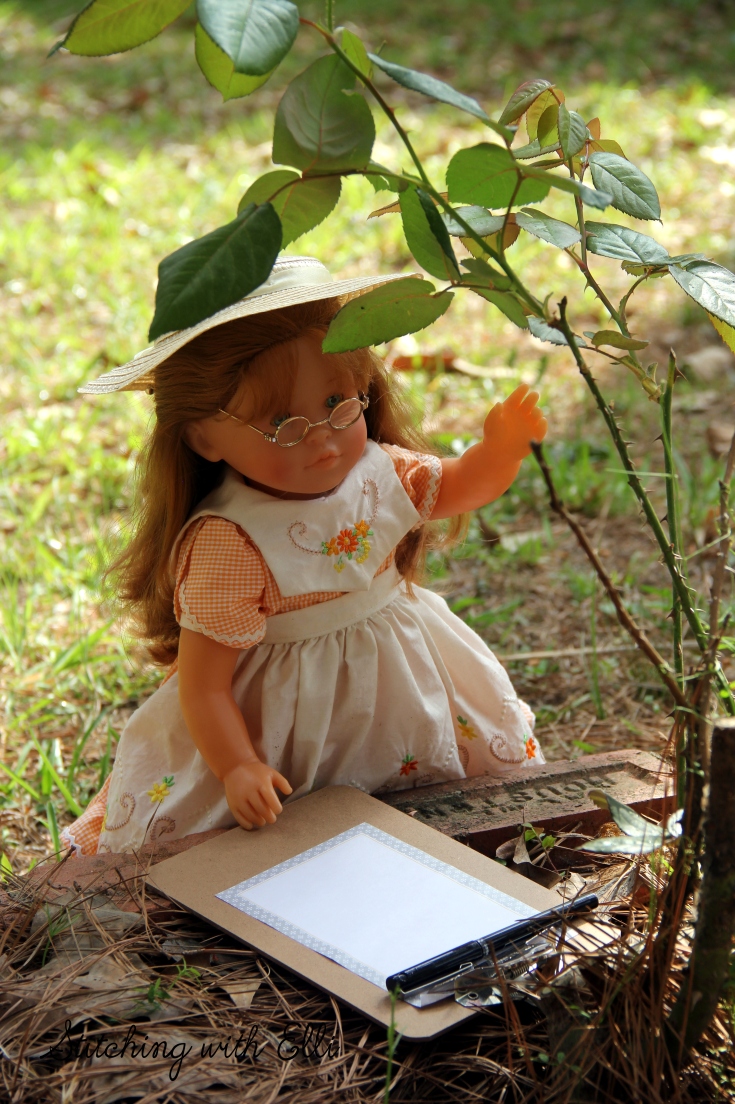 What do you suppose Ellen is trying to look at now? 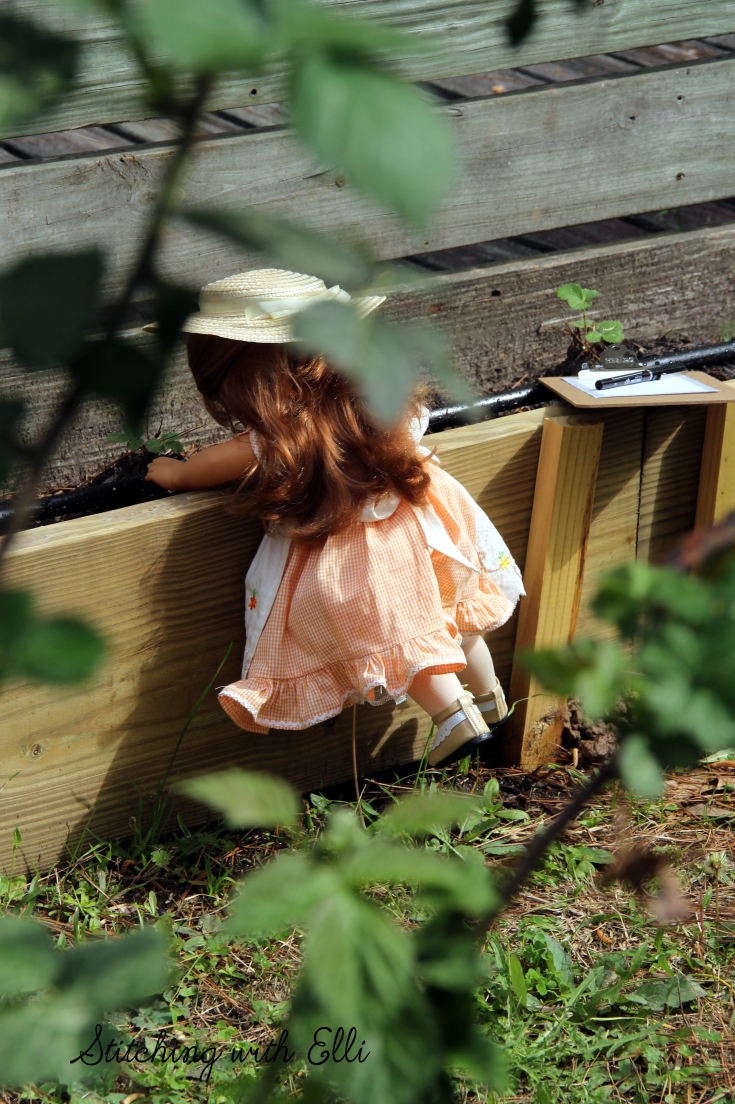 Strawberries! a nice long row of them…but a little high for an 18″  doll. Her little hands got covered with dirt as she tried to see how wet the soil was and if the irrigation system was working. 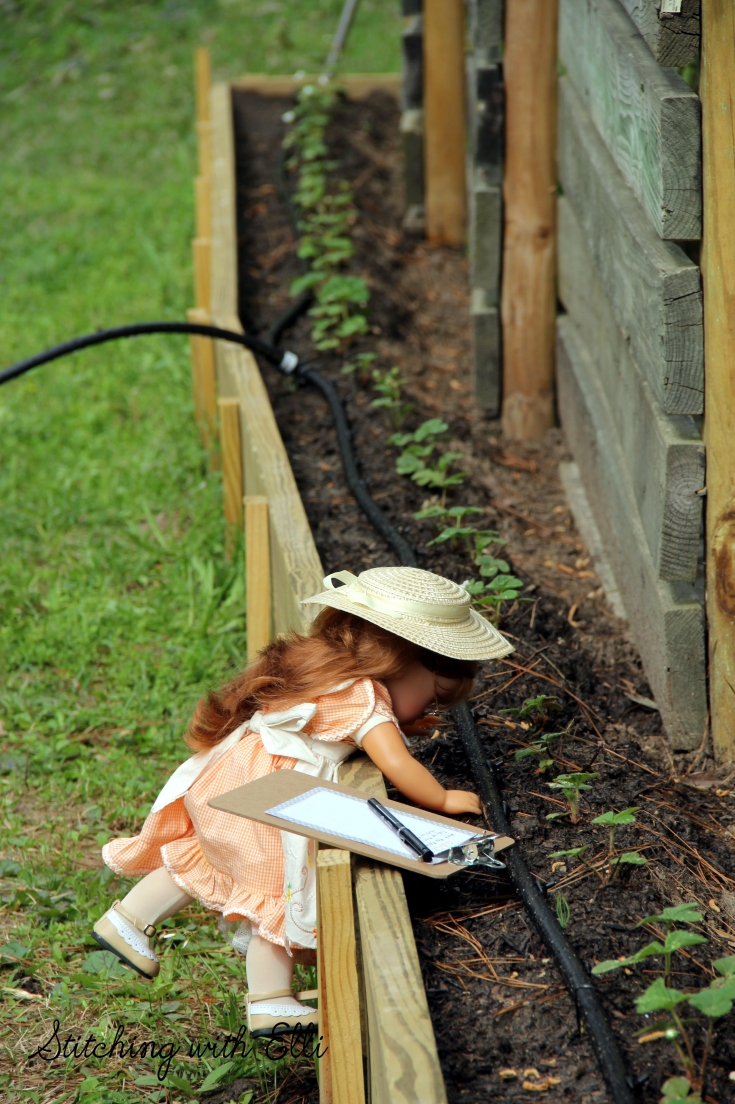 After carefully cleaning up her hands so she wouldn’t get dirt on her paper and dress, Ellen perched on the edge of the strawberry bed and wrote “water and weed strawberries”. 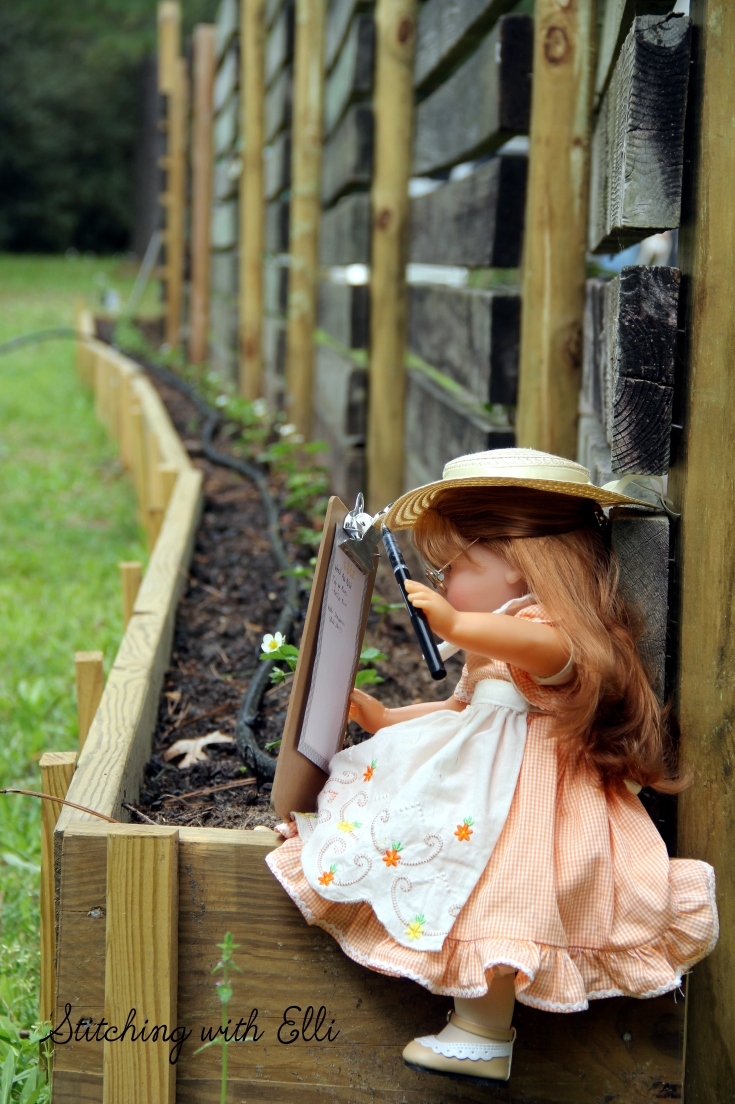 Swinging little legs, which didn’t even come close to touching the ground from where she sat…Ellen added a note about possibly building steps for the strawberry bed. She wasn’t at all sure it could be done, but it didn’t hurt to put it on the list. 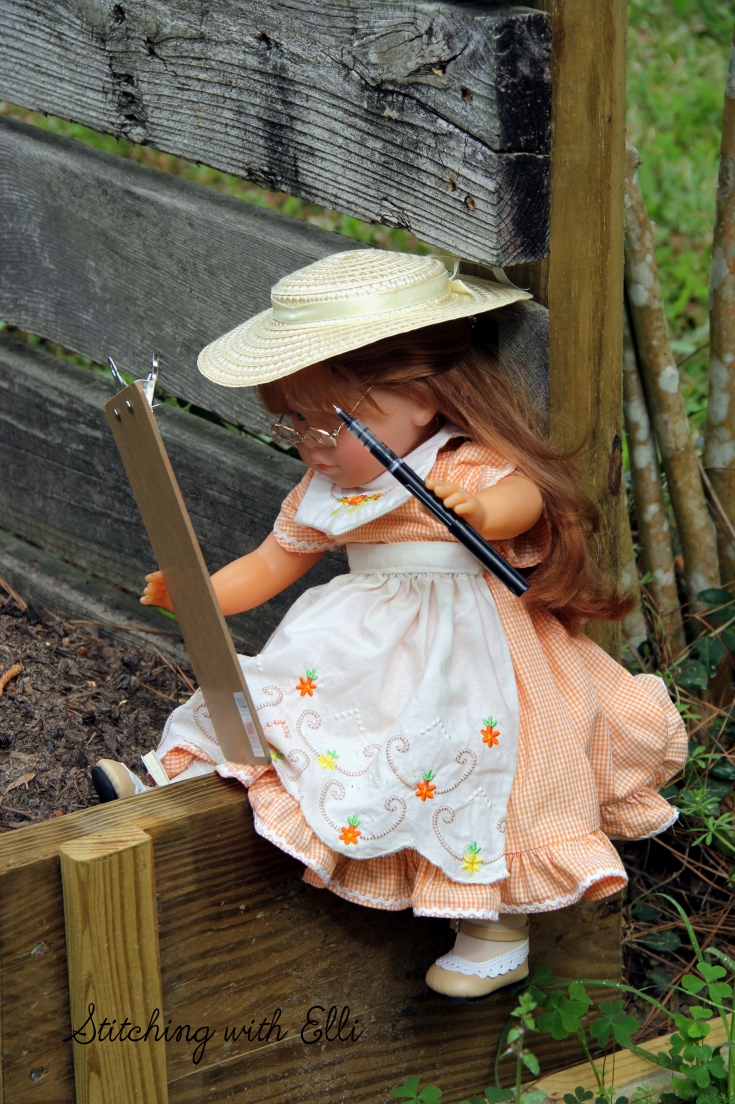 The next stop was the long bed with potatoes and beans. She leaned against the pole the beans would cling to as they grew tall.

“There isn’t much to be done here right now. Hmmm, but some of the dolls aren’t very good at gardening…..I wonder…..” 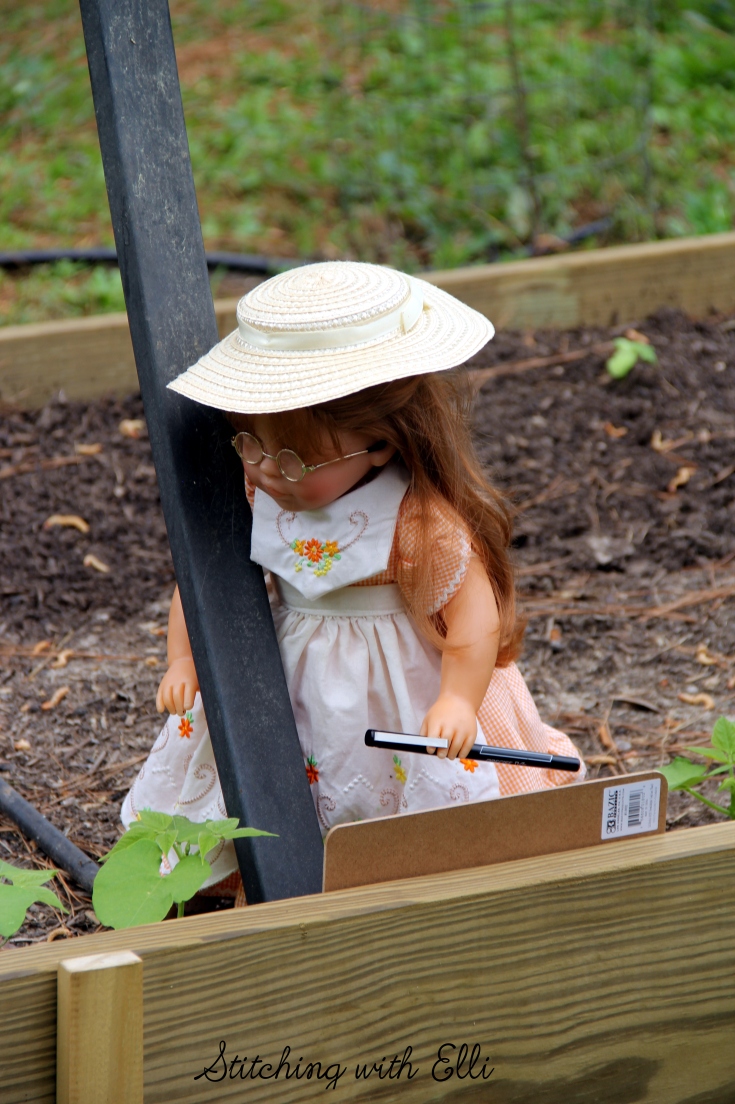 Suddenly she grinned! She had a genius idea, an important task that she could give to someone that didn’t have  a green thumb but wanted to be involved. Scritch-scratch…she wrote the “non-green thumb” task down on her paper.

A quick survey of the grape bushes…and then on to the blackberry bushes. She didn’t actually need to look at anything with the blackberries, but she walked too close.

Her skirt got snagged on the branches of the blackberries. 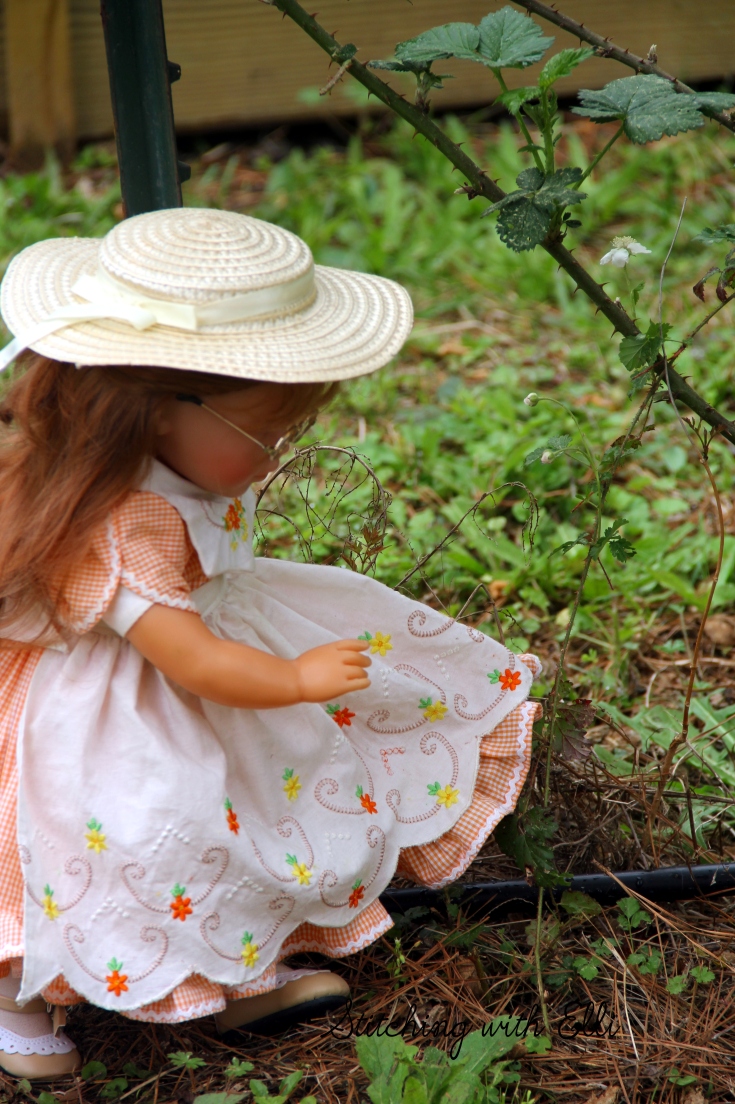 Those thorns were vicious!! 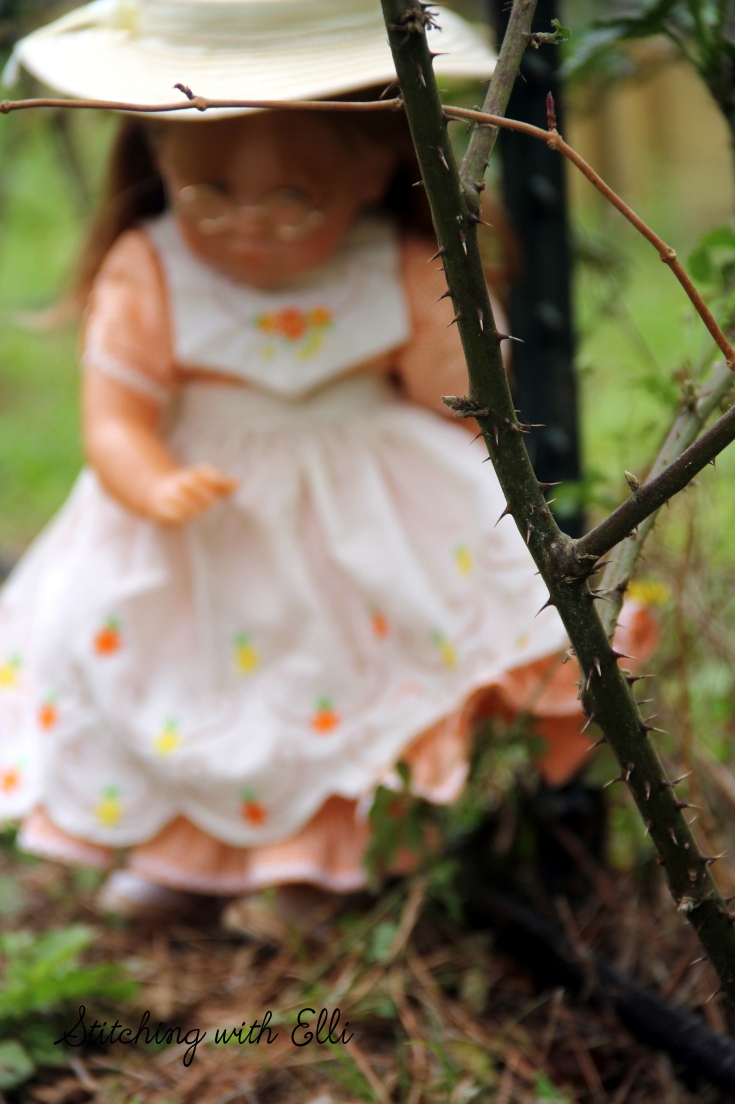 Working her skirt loose, she found a good “safe” seat on a step to check over her list.  She decided to add a few notes about the grapes….and then there were the new bulbs Emily bought yesterday they needed to be planted. 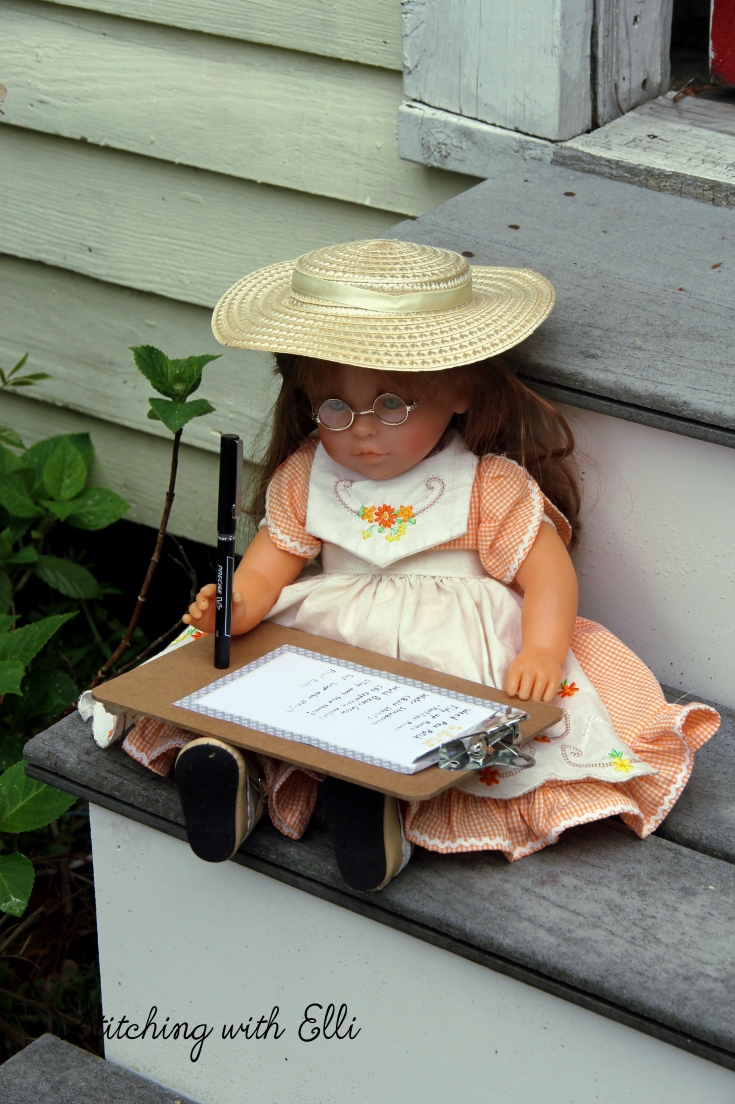 The list would have been longer, but her pen was not working very well towards the end. She doubled-checked everything, lowered her clip board and sighed in a very satisfied manner. She was confident that there was plenty for everyone to do. She was excited to marshal the troops and start work in the garden as soon as possible!

What do you think of her list? Are you working on any gardening this year?