Felicity has a new dress! The other dress she had been wearing was very nice but it was a hand-me down from Josefina. Which she greatly appreciated, but having a new dress for just you is pretty special….Felicity was pretty excited.

Her dress is made with a daisy kingdom pattern (Number 7605). The anchor embroidery designs are from Embroidery library. I used embroidery software to edit it and just used the anchor.  The Lighthouse design is from Breezy Lane embroidery. Breezy lane has some pretty cute designs!

Nellie and Samantha  were also going. They all worked together to pack the basket.

“Mmmmm, this towel is so soft!” sighed Samantha as she put it in the basket.

“Is the sunscreen in the basket?” asked Felicity…. 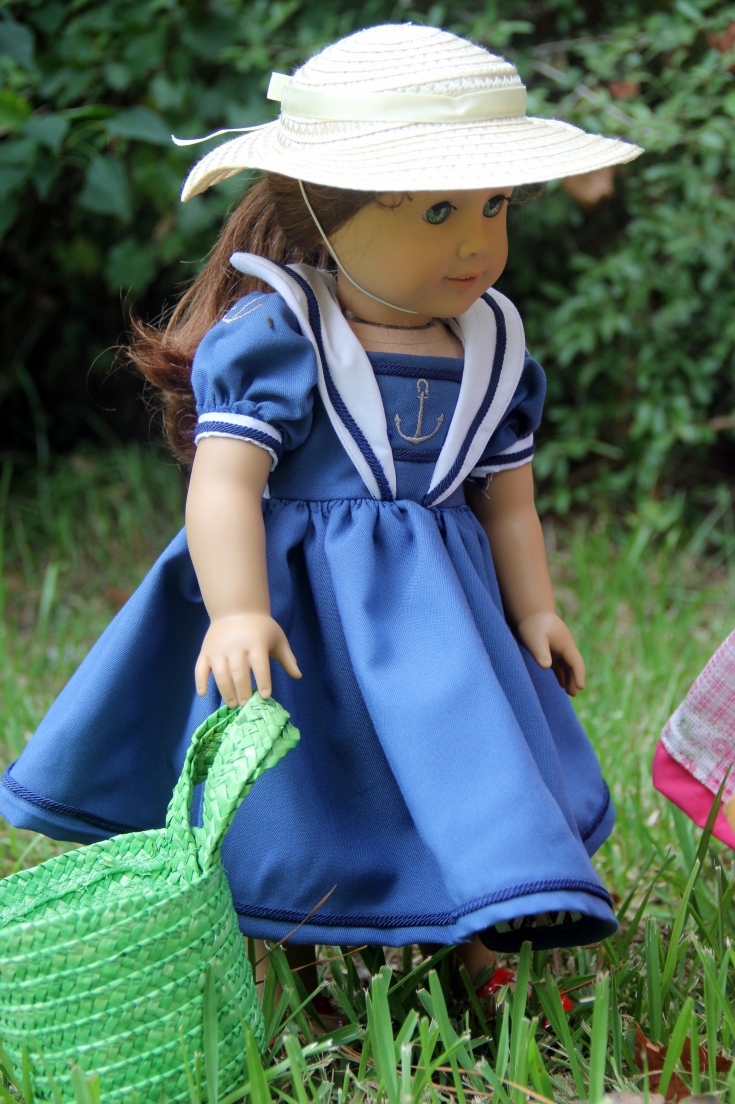 “Let me check” said Nellie as she leaned over and dug in the basket “There it is, I can see it.”

Where do you think they are going with a big basket….sunscreen….a fluffy towel?

Whew it was so windy!

Felicity loved burying her toes in the sand and waiting for a wave to come wash over them.

She even found a few shells! She put them down in front of her so the waves could wash them off for her. 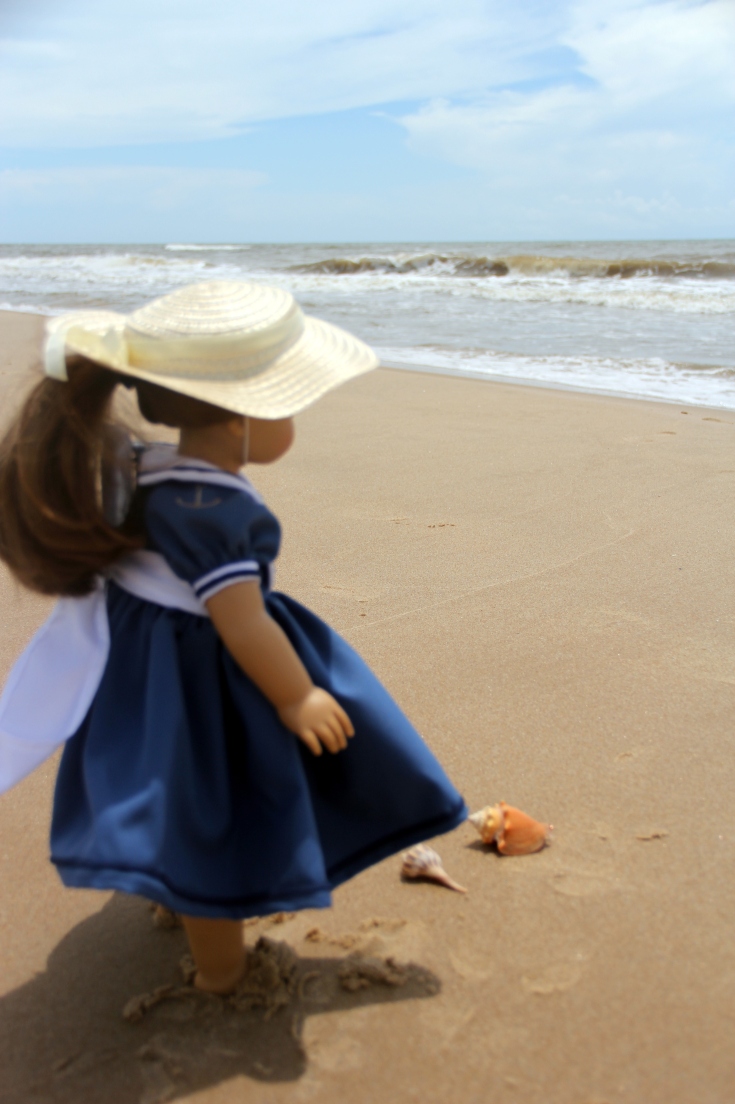 Then she went back to join the others on the blanket.

“I’m not sure if you noticed….but you are getting sand all over the blanket” observed Nellie casually. 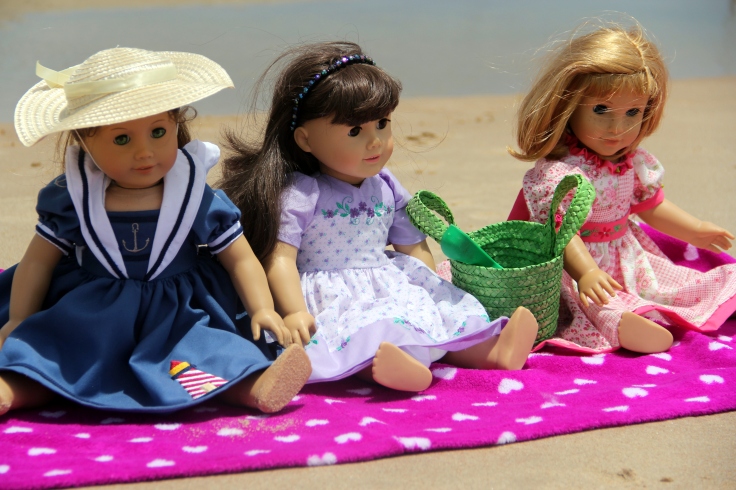 ” ah well it is a  unavoidable consequence of being at the beach” grinned Felicity.

They had picked a spot to sit with a little tidepool behind them and the waves in front of them. Samantha was hoping the birds wouldn’t come around…she was scared of them. 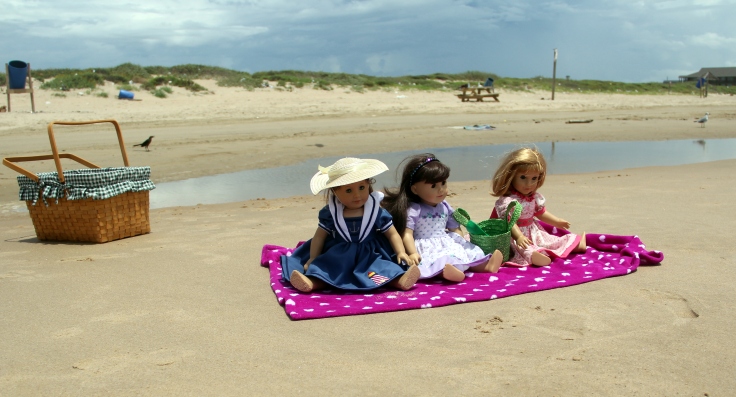 Felicity got up to go look for her shovel in the basket. “Hey! my hat is trying to escape!” “Hang on to it tight! but don’t let it blow away with you!” was Nellie’s helpful observation. She had been to the beach before and lost her hat. This time she wasn’t taking any chances and didn’t bring a hat.

Felicity fastened the hat strap down tighter. Then went to go bring the basket closer, while she looked for her shovel. It took a fair amount of shoving but she got the basket next to the blanket….then she fell in the basket while trying to get the shovel out. Finally she emerged triumphant. 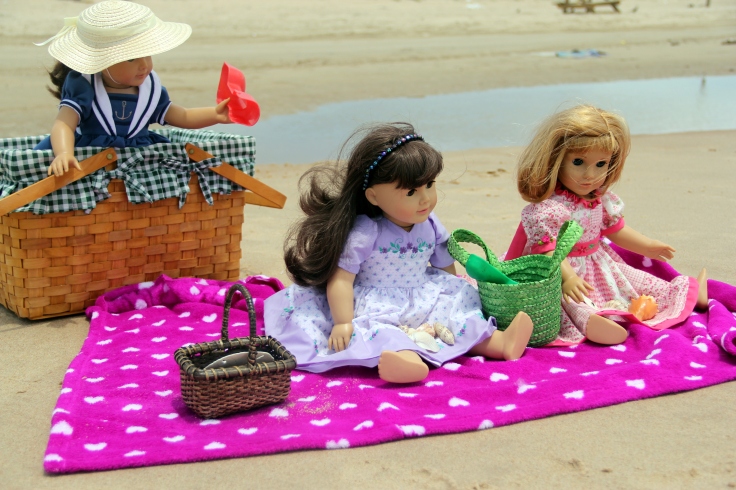 “I found it! Who wants to go dig for buried treasure with me?” She asked the others.
Nellie yawned lazily as she flopped over backwards and laid down.

“Not me! I wanna take a nap and listen to the waves for a while” she said as she stretched and relaxed on the blanket.

Samantha said she didn’t feel like it at the moment either. She wanted to look up the seashells in her identification book to find out more about them. Then go play in the waves.

Not to be discouraged Felicity just grinned and said “All the more treasure for me!” and trotted off with her shovel.

She dug around for a while and had a great time digging holes and building castles for the waves to destroy.  But she didn’t find any treasure, I don’t think she really minded….it was fun to just pretend. Later they all went swimming and played in the waves. They splashed around a great deal. They even splashed me! so I had to put up the camera so it wouldn’t get wet.

I think it is safe to say they enjoyed the day. 🙂 All the way home they kept asking when we could go back. Samantha said her favourite part was just watching horizon and listening to the waves. Nellie loved splashing and playing the waves. But Felicity couldn’t make up her mind…she said it was either the waves or the shells….or maybe it was playing in the sand….

I think I agree with Samantha…but I also love playing in the waves. What is your favorite part about going to the beach?

8 thoughts on “Sand and sea salt!”