Felicity and Josefina have found an interesting box.

“Can we make it? Can we??” Felicity begged Josefina.

Josefina was excited about the idea as well…So they asked me if it was okay to make it.

I was very curious to see how this was going to turn out..so I told them it was allright with me if they wanted to try it.

They donned their aprons and got ready to work. 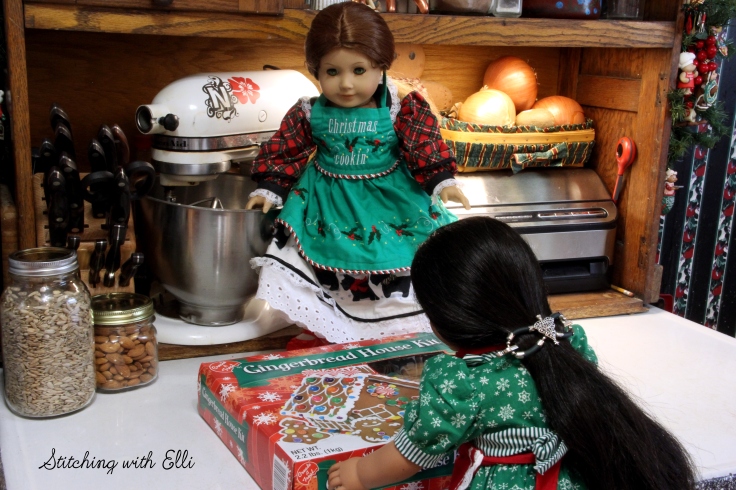 Josefina said the first step should be to read the directions…Felicity thought they should taste test the candy first.

“The first step is to kneed the frosting to make it softer and room temperature.” Josefina said as she read the box.

Felicity looked confused….”Well, I have the icing tube, but I don’t understand how needing it makes it warmer? I mean, obviously we need it. How else could we stick together the gingerbread?”

Josefina stared blankly at Felicity for a minute and then realised that Felicity must not know the other word that sounds like “need.”

“OH! No, sorry, that is a different kind of need, This one is “K-N-E-A-D” it means to smash mash and push something.” Josefina explained.

Felicity thought that was very confusing. You could either have something be very important and necessary…or you could be smashing and mashing something and it would sound the same.

Josefina agreed that it could be confusing, but she explained that the smashing and mashing kind of kneading usually was only used in relation to things like dough or clay or something similar….unless it was a cat. Cat’s could knead with their paws too. Felicity said it made sense except for the cats….Why do cat’s work with dough or clay?

“Well, when cats knead their paws do the same motion as…Oops!!” Josefina exclaimed “I got distracted and laid these pieces out the wrong way. We want to put the frosting on the back not the front.” She flipped them all over again.

Felicity was piping icing in the bottom of the base. 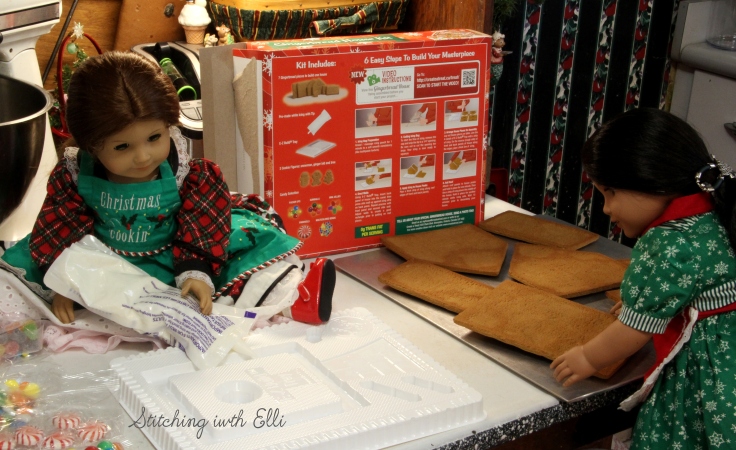 She then passed the icing to Josefina and she started piping on the pieces.

She had some trouble, because the bag started leaking…Frosting was coming out of more places than just the nozzle. Felicity put the pieces in place  as Josefina finished them.

“Hurry Josefina! I need the end piece to make everything else stand up!”

“Uh oh…..Heeeelp! Josefina! The roof is sliding and the wall fell in! I don’t think I should become an engineer,” Felicity said mournfully.

Josefina rushed to help, icing bag in hand…The roof was taken off and more frosting applied…

“Whew!” Josefina sighed, sitting back in the chair…”This is a lot harder than I thought it would be!!”

They finally figured out a way to hold the roof in place while it dried. (such clever dolls!)

I think this is going to take longer than they thought…Maybe I had better announce the winner of the jacket giveaway now and come back and see how they are doing with the gingerbread house later….

Congratulations!! I’ll send you an email shortly  to get your address 🙂