A Bed of Roses

The dolls have been enjoying the spring weather. They were eager to get outside and enjoy the sunshine. I asked them if they wanted to help me in the garden. Such squeals of eager excitement!! They were eager to dig in the dirt. We loaded up some tools, and  they hopped on the wagon for a ride.

Emma’s hat was blowing off, so Bridget helped her out by holding it on.  “Do you think there will be bugs and worms?” Nellie asked. She didn’t sound exactly worried by the prospect. 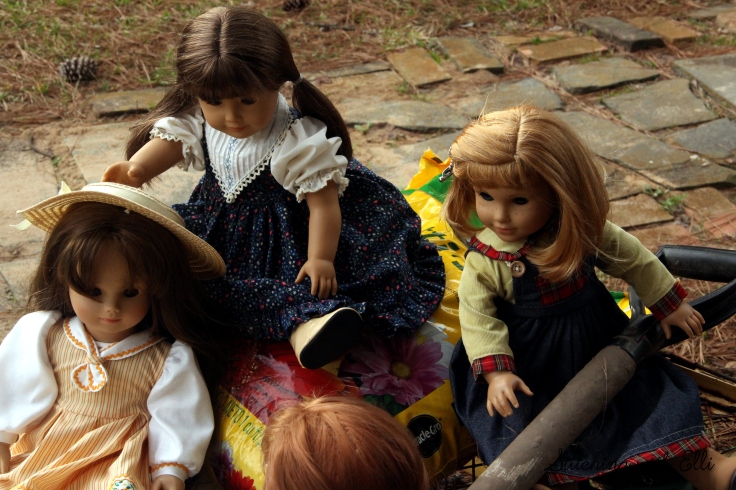 “Well, if there are, you can have my share of them!” Emma told Nellie.

“No fair! I want some too!” Bridget protested. Emma said she didn’t care who had them as long as it wasn’t her.

“Bugs and worms and dirt are an unavoidable part of gardening. We must not be squeamish if we are going to help Emily,” Ellen said very seriously. Bridget patted Emma on the shoulder and said not to worry. She would protect her from the bugs.

They soon arrived at the garden and set to work. The first step was to clear away all the pine needles that had laid there all winter. Bridget rolled up her sleeves and set to work. 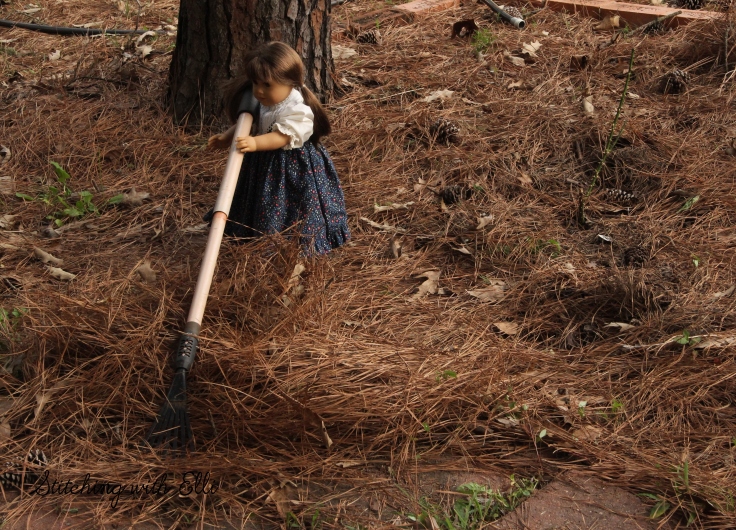 “Oh look! There are patio stones under here!” Bridget was excited at her discovery.

Emma was working on cleaning a little statue. “Be careful when you rake over here, Bridget,” she called “I think there is a little plant here hiding under the pine needles.” Bridget waved at her to acknowledge that she heard.

Ellen was working on clearing out around the roses bushes that were already planted. “I wonder what color rose this one is?” she mused to herself.

Nellie was working on digging out a rose bush that Emily said needed to be moved. The big pitchfork was a bit hard for her to handle, but she managed. 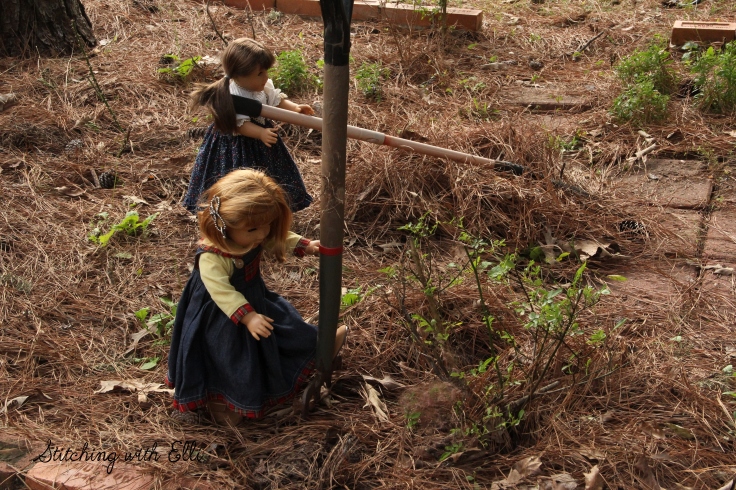 Such busy little dolls…I’m sure they will have the garden fixed up in no time!

Bridget finished raking. She went to fetch the new rose bush. “Do you have the hole ready yet, Nellie?”

“Almost, We need to tell Emily to get us shovels our size. I think it would go faster,” Nellie replied. 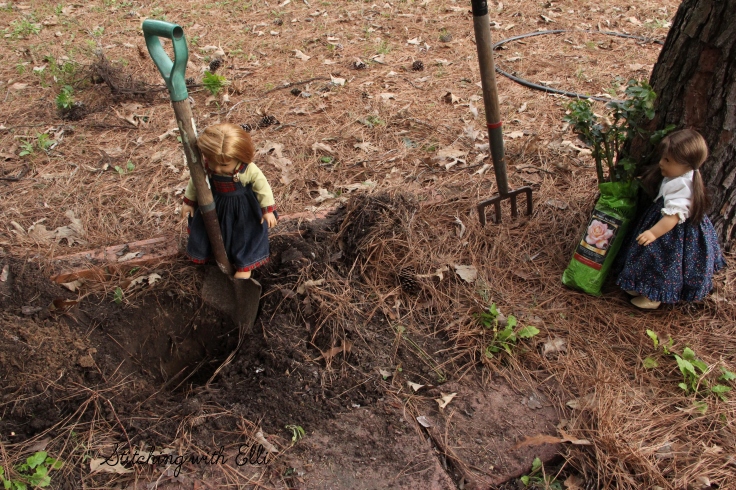 Nellie wasn’t sure about that , so she called in the experts. “Ellen, would it be faster to dig with a shovel our size or a big shovel?”

Ellen paused  from her weeding. She pushed her glasses up on her nose, making a streak of dirt, before she answered. “That would depend upon the ratio of speed to volume of dirt moved. A smaller shovel can move faster. However, if the volume does not equal that of a large shovel in same amount of time, then it is slower.”

Nellie said, “Anyway, the hole is ready now. I guess we won’t know if it is faster with a smaller shovel.”

Ellen and Bridget got the bag of potting soil and dumped some in the hole.

Nellie was “helpful” by climbing into the hole to “guide” the dirt.

“You aren’t a rose”, laughed Ellen “A Rose is a rose…speaking of which, where is Rose? Shouldn’t she help us plant roses?”

“I think she was busy sewing today,” Emma replied. She had come up with a plate of something she was adding to the hole.

“What is that stuff?” Bridget asked Emma very curious.

“Egg shells. Broken up egg shells will help feed the plant and make it tall and strong.” Emma told her.

“Egg shells do all that?” Bridget was impressed “If there are some left over can I eat some? I want to be tall and strong too!”

Emma and Ellen explained that plant food doesn’t work for people or dolls. The egg shells would not help Bridget grow, but it would help the plant.

“What about the cat?” Bridget asked “Will egg shells help her? Daisy seems very interested in the egg shells.” 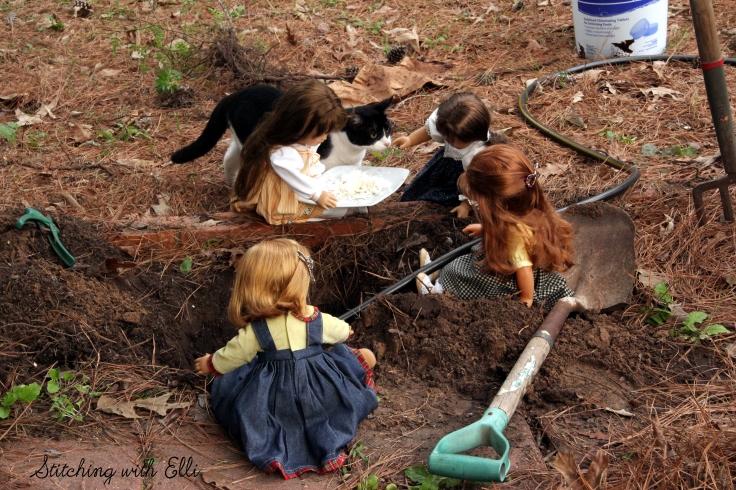 “I think she is just nosy,” laughed Nellie.

Nellie peered into the hole “It looks like a weird soup,” she observed. The cat seemed to agree with her and soon lost interest in the “soup”.

“Is that enough egg shells yet?” Bridget asked. “They are sharp and hurt my hands when I crush them. I think I need gardening gloves.”

Emma said she thought it would be enough for now.

They placed the new rose down in the hole. Nellie held it in place, while Bridget added more potting soil, and Emma pushed dirt in the hole. Ellen was going to help push dirt in, but was delayed a bit because she slipped and bumped her head on the shovel handle. Ow!

The others checked to see if she was okay. She assured them that she was. Nellie said as long as Ellen was okay ,could they please hurry and put the dirt in? Her arm was getting tired holding it up.

“What kind of rose is this? she asked.

“A Peace rose” Bridget responded with her head buried in the potting soil bag. 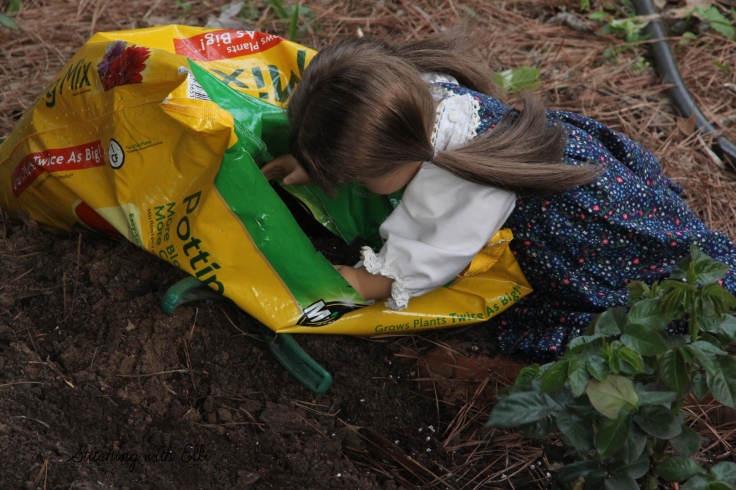 “A what??? This is only a piece of rose? Where are the other pieces?  Is this the part that blooms? Does Emily know she only got part of a rose??” Nellie was indignant that all this work was for only part of a rose.

“No, no,” Emma explained, ” a peace rose…peace like umm no war…no conflict…happy… content. It is just its name, because it was created around the end of WWII.”

“ooOOOooo” Nellie said. “That makes more sense. What a pretty name. Do you know the whole story?”

The others chimed in that they wanted to know the story too. They  finished filling the hole with dirt. Then Emma told them the story of the peace rose, while she watered it.

She told them how the man that had cultivated this particular rose lived in France. He knew his country was going to be in trouble because of the coming war. To save his rose, he sent cuttings of his new hybrid of rose to friends in Italy, Turkey, Germany, and the United States. They made it out of France right before France fell  to the Germans in WWII. (Wow! that was close, Nellie whispered under her breath)

“Yes it was very close,” continued Emma. ” The people he sent it to didn’t know what name he wanted for it ,so they called it different things at first. One of them called it”Madame A. Meilland”  after his mother and another called it “Giori” (joy) or “Gloria Dei” (glory of God).”

“They talked about it for a while. Then, on April 29th 1945, it was officially decided and announced that it would be called the Peace rose. There had been so much war in the world that they wanted to name this beautiful and special rose “Peace” in the hopes that the world would soon have Peace.”

“What a lovely story,” Ellen sighed, “I can’t wait to see it bloom.”

“Let’s put some more food on it so it will hurry up and grow! Then we can see it sooner.” Nellie was eager to help this little plant grow strong and tall. 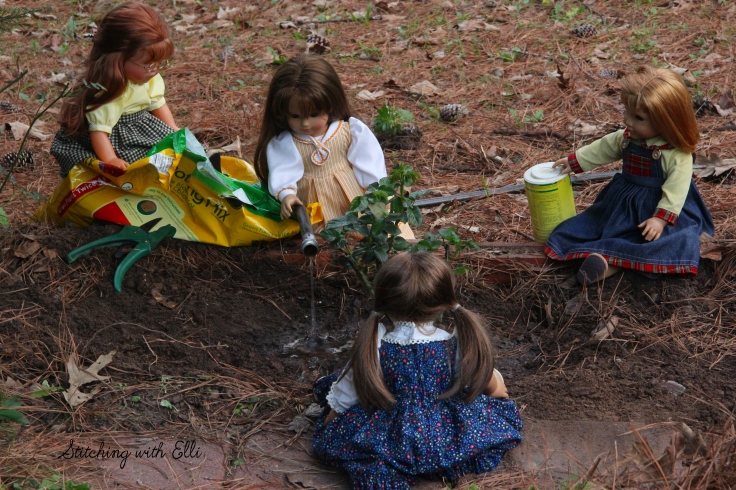 The dolls have big plans to add about 10 more rose plants to the rose garden. I can’t wait to see the finished results of all their hard work!

7 thoughts on “A Bed of Roses”