Adventure in the Texas Hill Country

Ellen hummed happily to herself. It was a gorgeous spring day and she had an important job to do!

Two new dolls had arrived and Emily had asked her to help them feel at home….with Bridget to help. They were going on a trip to the Texas Hill country.   Ellen loved taking trips, and to have the responsibility of being in charge too…! Well, Ellen was sure this was going to be a lovely trip.  As she finished packing her suitcase, she thought about the best way to make the new girls feel at home. Maybe.. make them lists of everyone’s names with facts about them, so they could memorize them? She and Bridget would make a great team! Bridget was fun and could make people feel more at ease, but she did forget the rules sometimes.  Ellen wrinkled her nose thoughtfully. Sometimes Bridget just couldn’t seem to remember not to take unnecessary risks!! It was up to her (Ellen) to keep them all safe and on track. Emily couldn’t be everywhere at once….so that is what Ellen was here for. 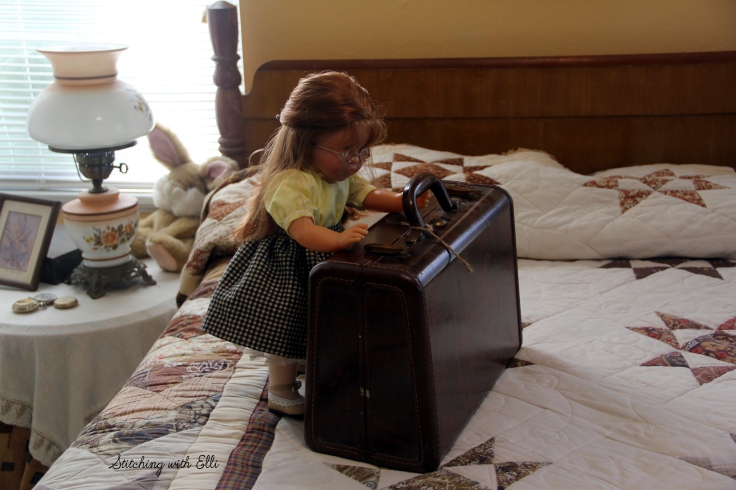 Soon they were all off on their trip. The car ride was interesting for a while….and then boring and sleepy for a while more….and then hilariously goofy….in short it was like most long car rides with a group of dolls and Emily.  No one remembered to take any pictures of the car trip.

The first time they pulled out their cameras was at their destination. Pedernales Falls! 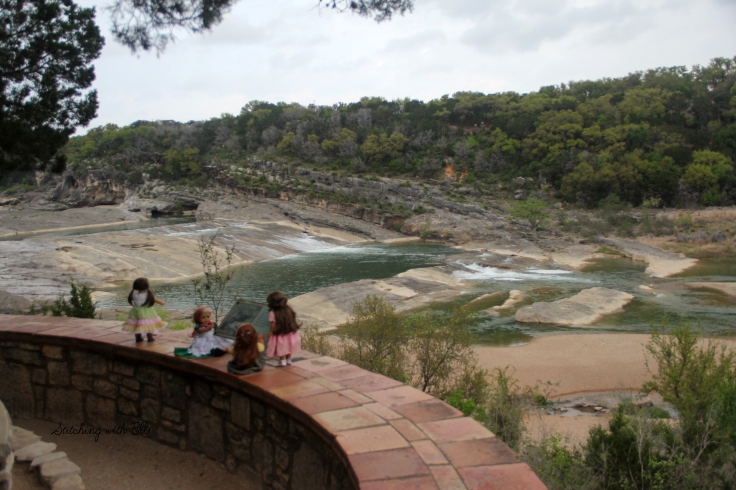 “Whoaaaa, wow is that ever big!!” Bridget gasped.

The others didn’t hear her. Marie Grace and Ellen were busying studying the sign to see what important information they might need to know.  Charlotte was looking down stream to see what else was down there.

“Danger!! Entering the water is prohibited!!” Ellen read the sign. “Bridget, did you hear that? not even dipping your toe in!!!”

“Peligro se prohibe meterse al agua…” Marie-Grace read over her shoulder. “I guess that means the same thing but the only word I recognize in there is “agua” that means water. oh and “Prohibe” must mean prohibited ”

“Mmmm” mumbled Bridget as she gazed upstream at the waterfalls. 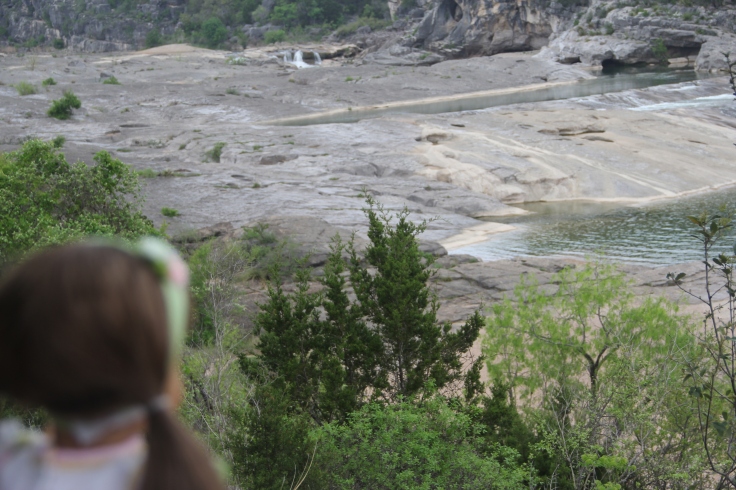 Bridget already had her eye on the far falls…that was where she wanted to go!! not any boring downstream placid pool area!! 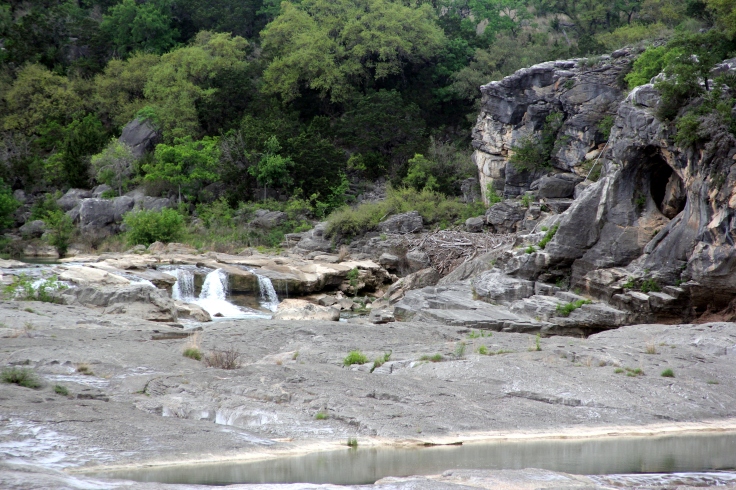 No matter which direction they wanted to go, the first step was to go down the stairs. First they had to wait for Ellen to finish reading the signs and warnings. then off down the stairs they scrambled. 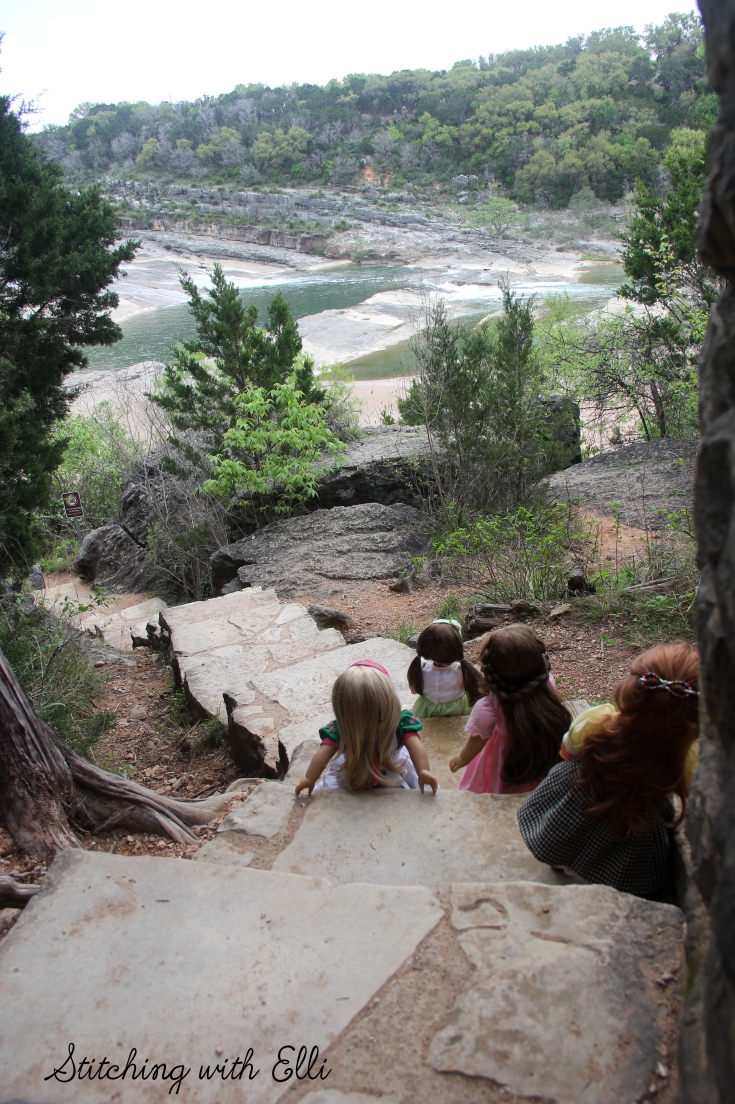 You never saw four little girls climb down stairs so fast!! Ellen was just as eager as the rest of them to get down the stairs. They were hurrying so fast that she was getting out of breath….but she still found time to call out warnings as she scooted down the stairs.

“I think we should all stick together and not split up.”

“Agreed!” chorused the others.

Ellen thought she had better warn them about what to do if they fell in the water. “Don’t forget that if you do happen to fall in the water, don’t try to fight the current. Just keep your feet up and ride it out to the bottom of the falls.”

“Why do you keep your feet up?” Charlotte was curious.

“So they won’t get snagged on the bottom.” Ellen informed her.

” Ellen? I have a question. Don’t you think the water is more than 18″ deep?” Bridget asked.

Ellen paused to think about this. “Weeeellll, I guess that is more of a rule for people than  for 18″ dolls.  Just keep your head up, then.”

Almost there! They helped each other scramble  over the rocks.

“Oh Bridget! look how the water comes down over there! It looks like a water slide!!” Charlotte said. 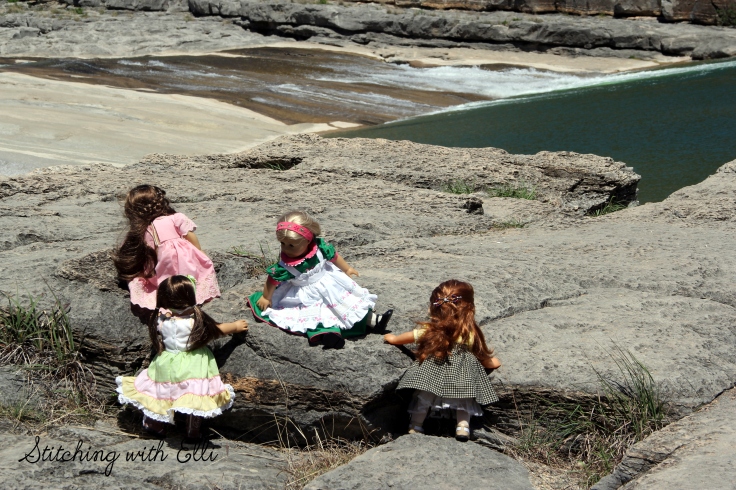 ” Where??”” Bridget had helped push the others up, so she couldn’t see as well..

“It may look like a water slide, but remember it is prohibited to enter the water.  I don’t want anyone getting swept away.” Ellen warned. 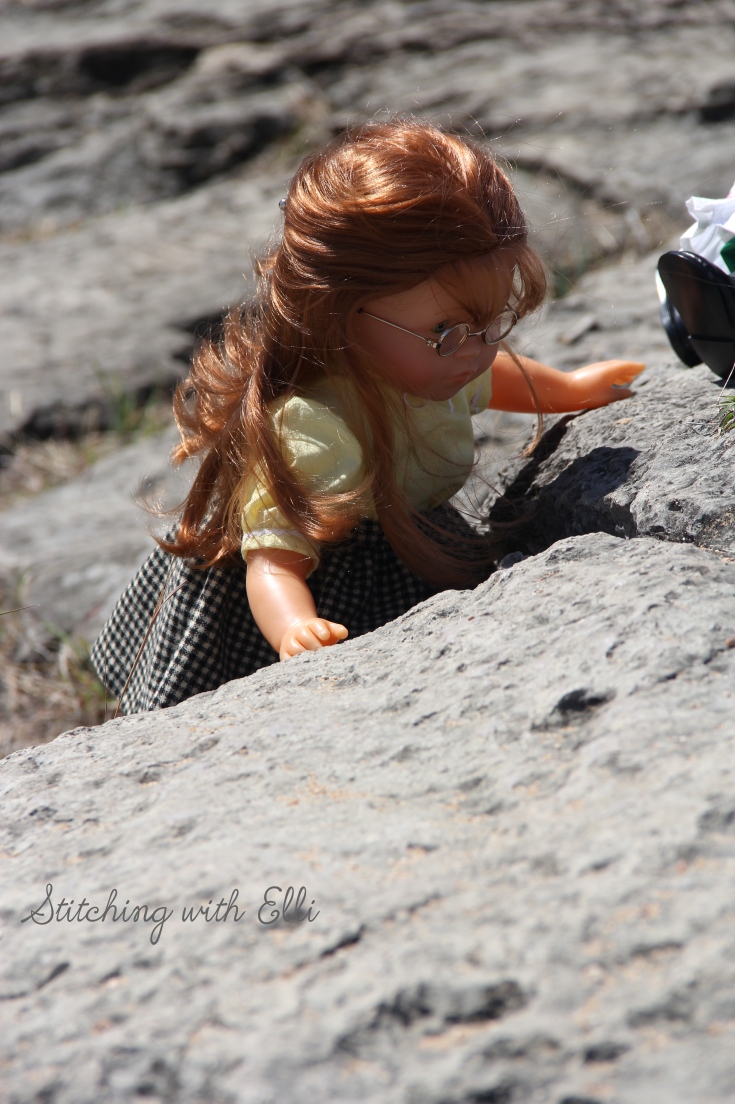 When they got nearer the water, they split up a little bit.

Charlotte and Bridget found some rocks to climb on…. 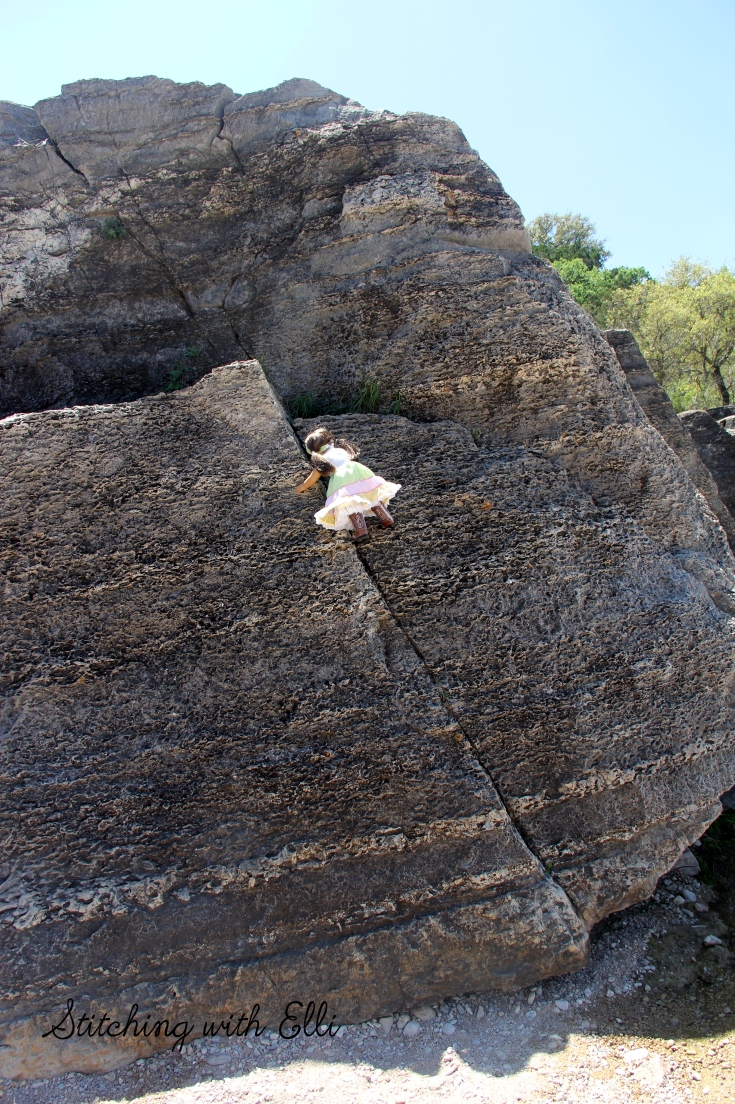 Bridget climbed first to make sure it was “safe” 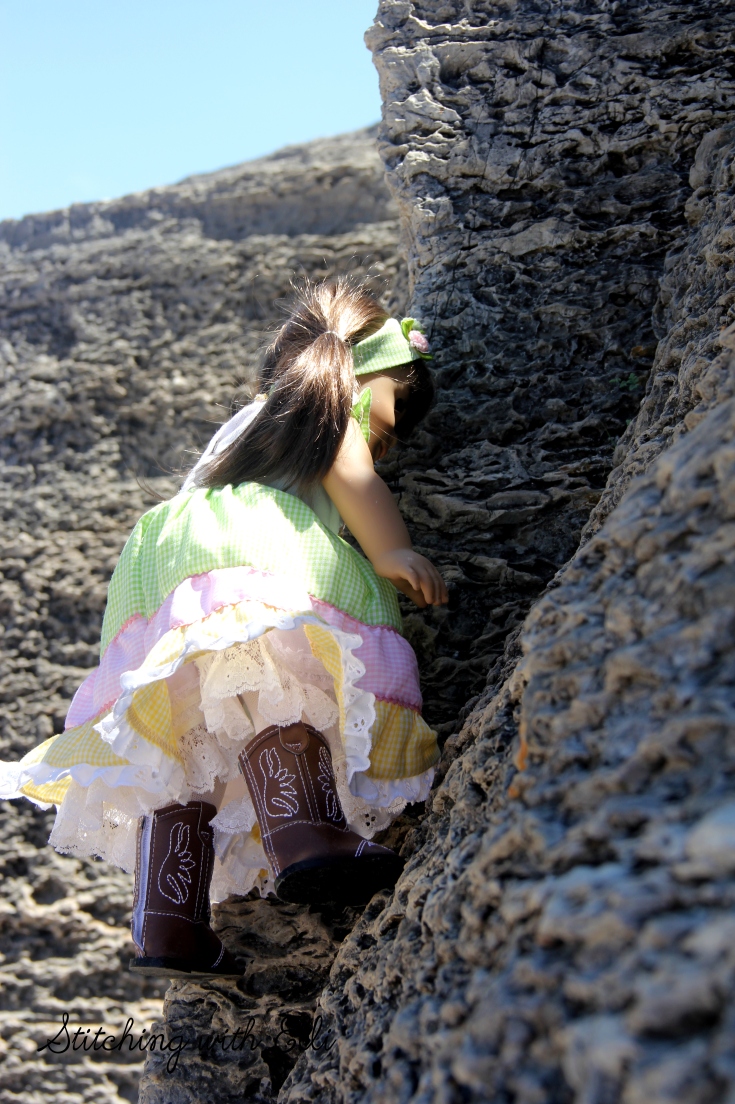 “Come on up! There are lots of hand and foot holds!” She called down to Charlotte.

“Almost there! Try grabbing a hold a little higher and to the left.” Bridget coached. 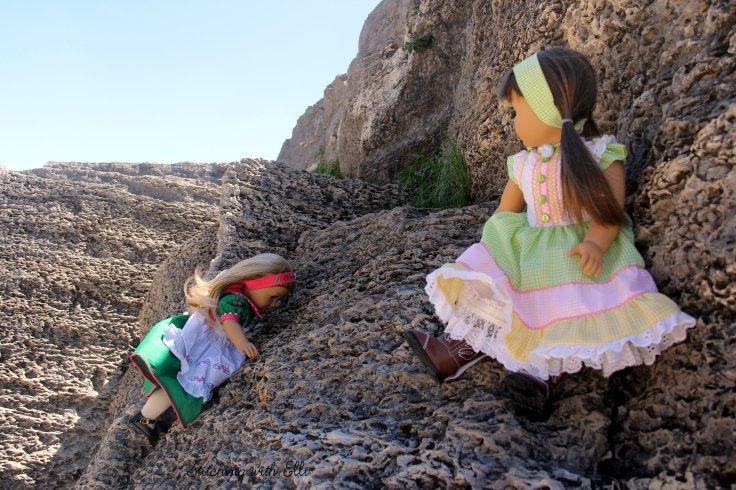 “Is the view worth it?” Charlotte gasped. Somewhere between the bottom and here she became unsure that the climb would be worth it; but once she had started, she was too stubborn to quit.

“Oh yes! It is lovely! When you get up here ,we can jump off into the sand.” Bridget assured her.

Somehow the idea of jumping off didn’t assure Charlotte very much. 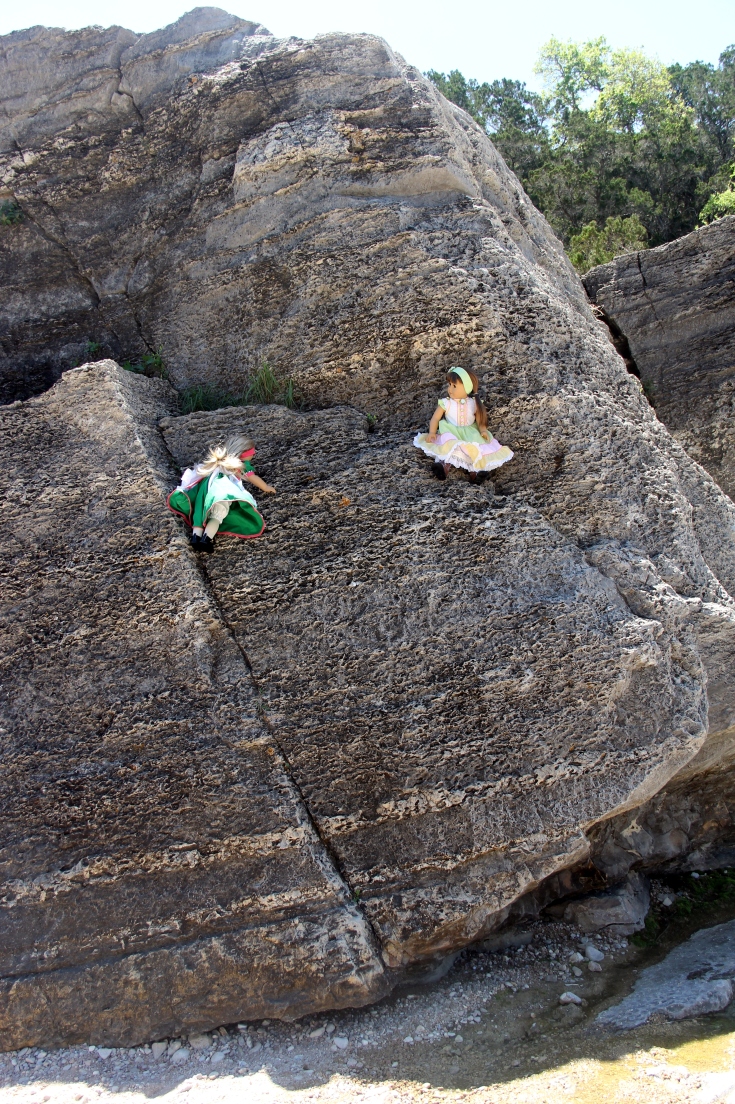 Where was Ellen while this potentially “dangerous” escapade was going on?

Ellen was distracted by a puddle.

She reaaaaaallly wanted to know how cold the water was, but the sign had said it was prohibited to enter the water….she couldn’t break the rules. Hmmm, but does a puddle count as the water? or did they just mean moving water?…. 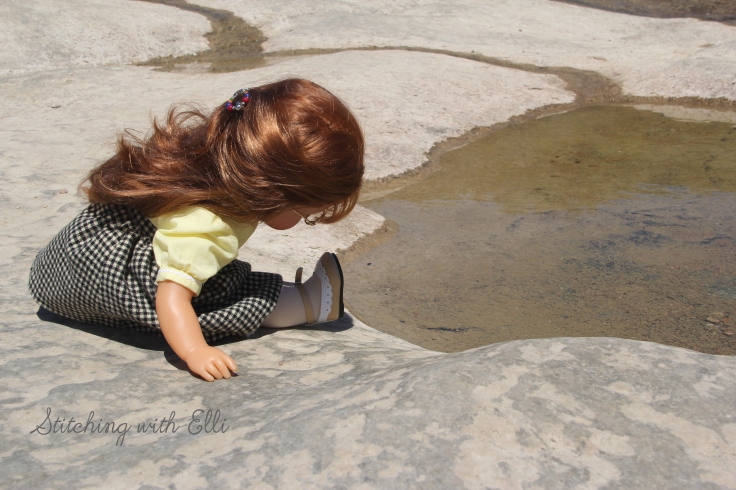 She pulled back. No, she couldn’t do it. What kind of a leader would break the rules like that? She sighed because being a leader wasn’t very fun sometimes. She would much rather splash in a puddle. Oh well,  she’d better go find the others.

By the time they all got together again, Bridget and Charlotte were down. (I’m not sure if Charlotte ended up jumping, but I am sure that Bridget jumped.)

The group strolled around over the rock. They found a fascinating crack to explore!! 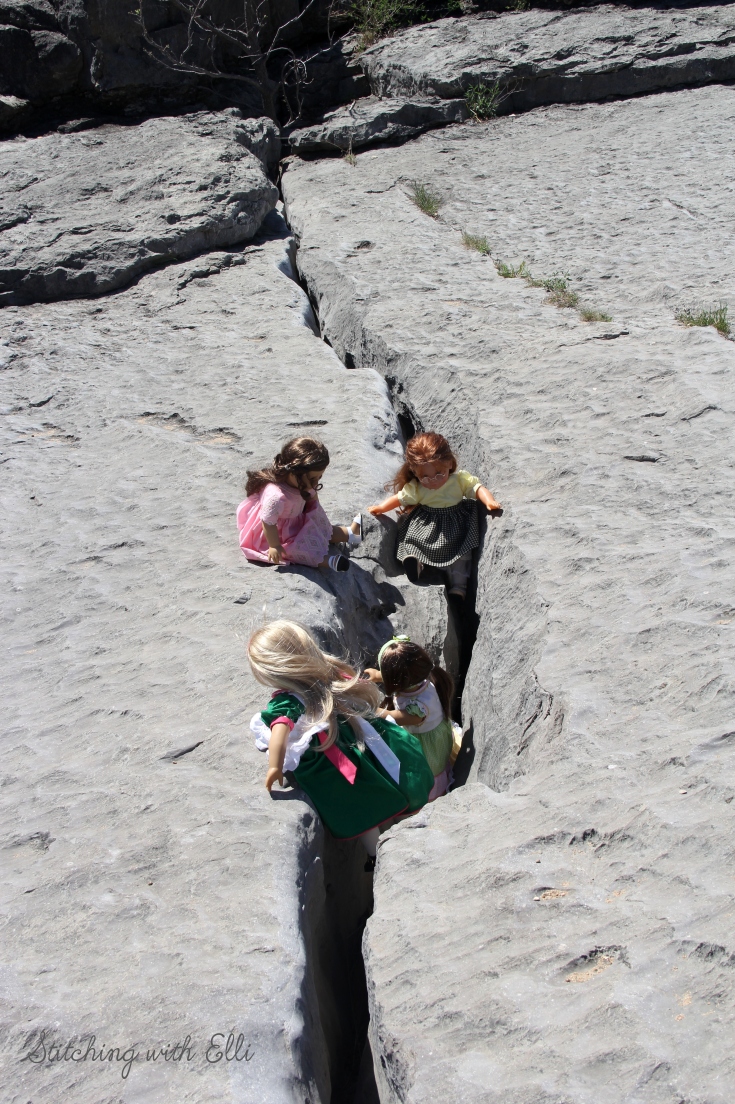 Ellen joined in the climbing down the hole….the sign didn’t say it was prohibited to enter the rocks, so her conscience didn’t object. 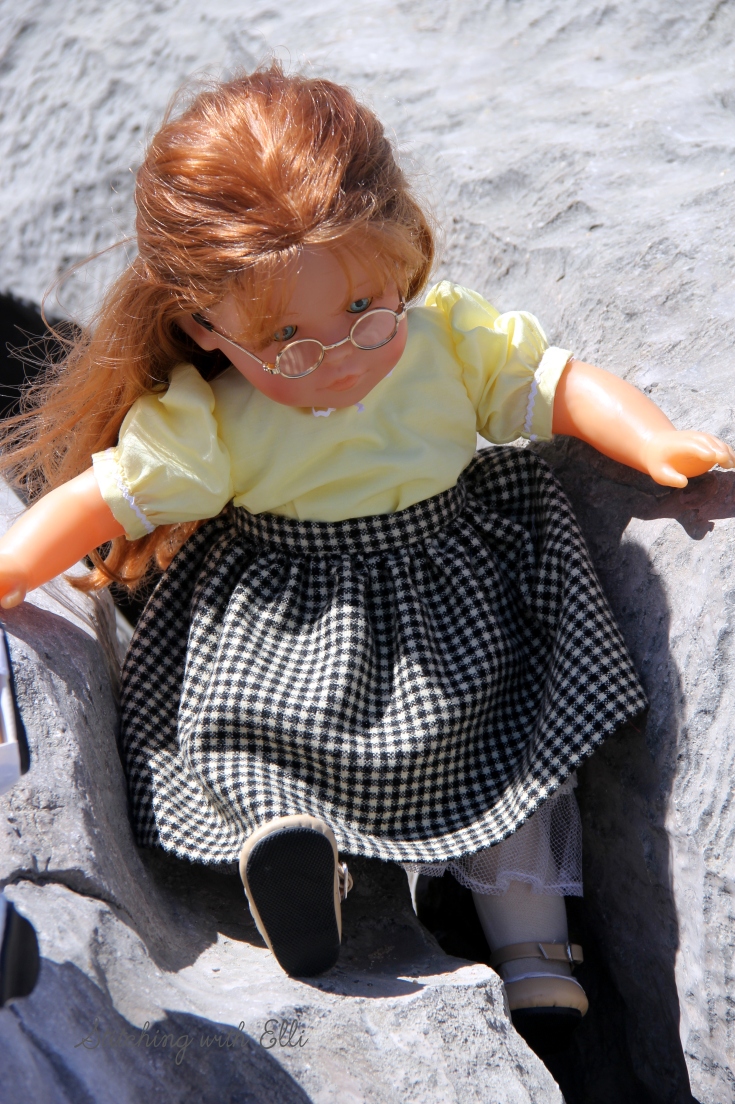 “Look footprints!!” Marie-Grace had found some funny shaped dents in the rock up ahead.

Ellen stuck her little foot in the hole for comparison. 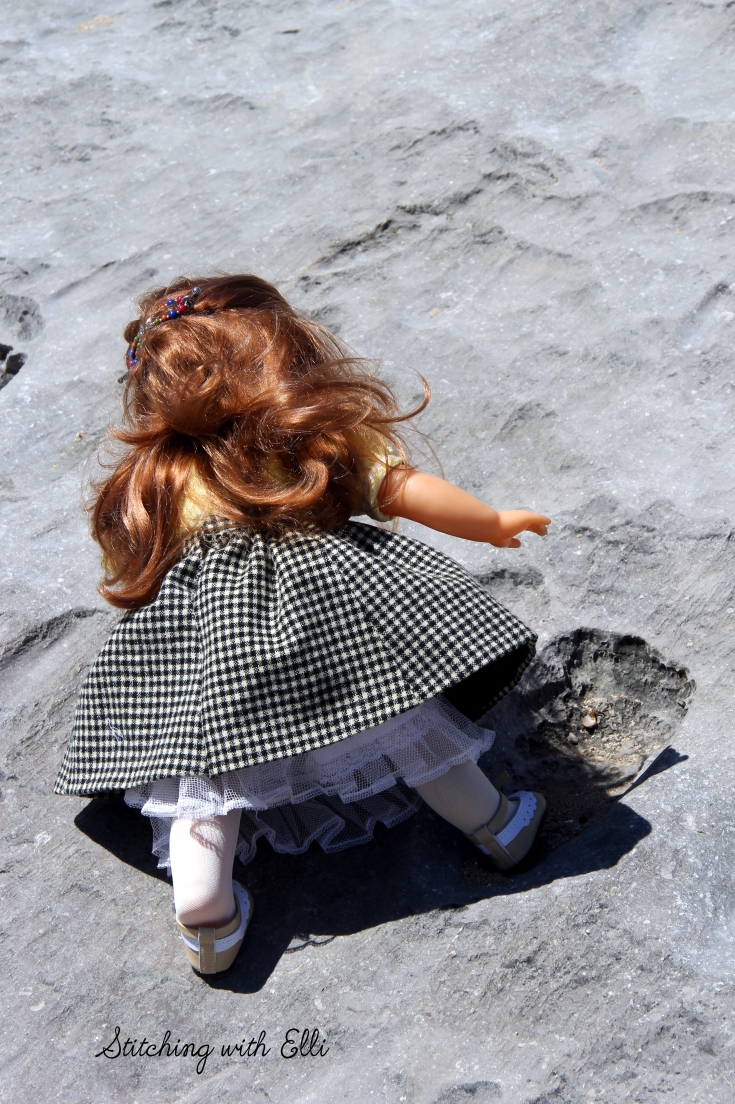 “If you think that is big…just look at this one!!” Bridget laughed. 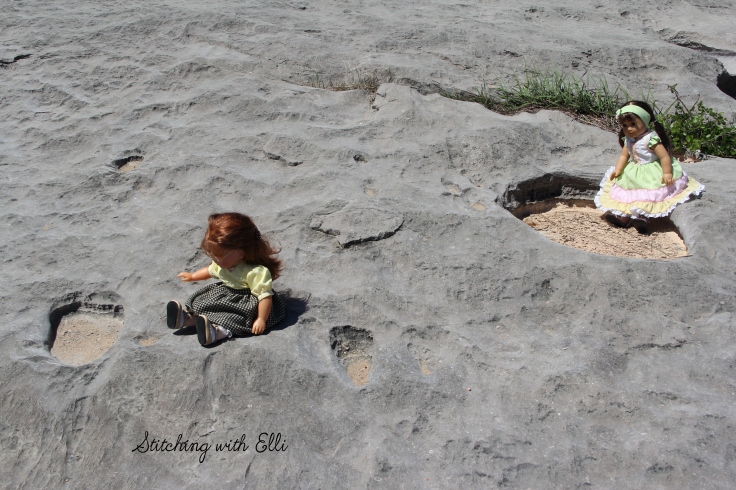 “Come look at this!!” Charlotte called out from ahead…”I found a stone easy chair!” 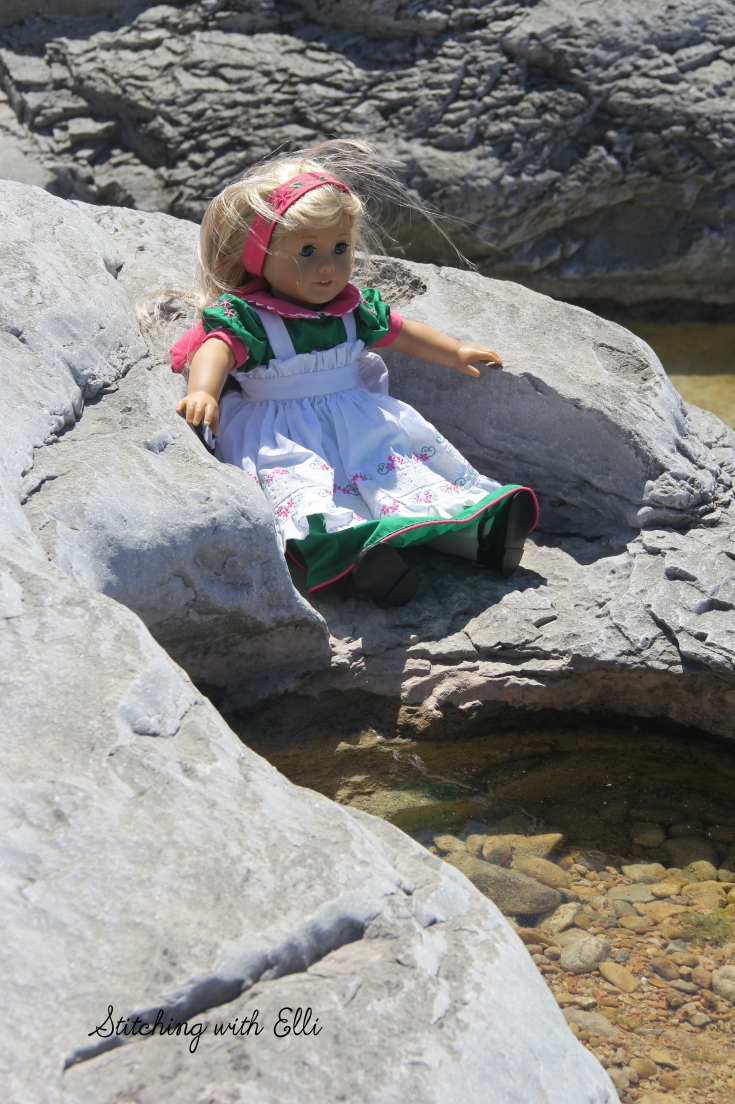 They took turns sitting in it for a while and then moved on to explore further.  Bridget still hadn’t seen the higher falls close up. While they were looking at the falls…they saw a man. Ellen stared at him for a while. She was almost positive it was the same man that the other dolls had seen in Alabama.…He surely gets around!! 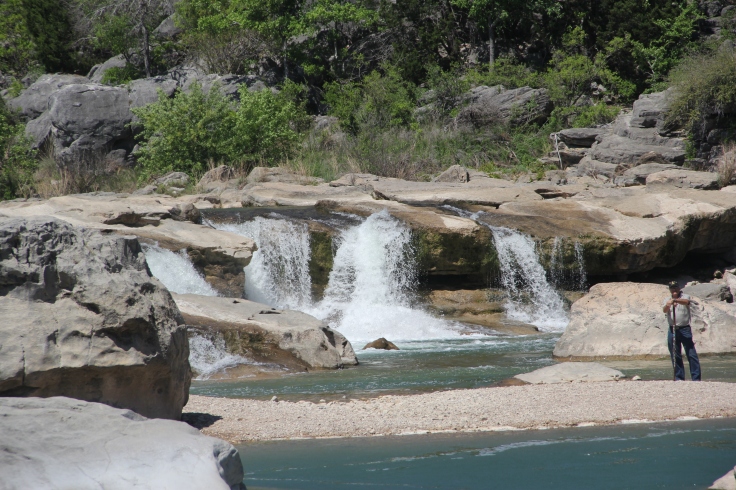 They found some fast rushing water. Not even Bridget was tempted to get close to the water there. 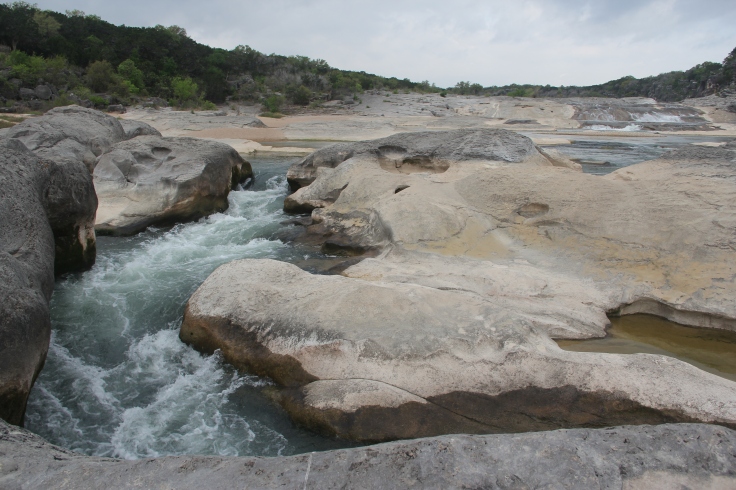 On the way back to the stairs they found the most beautiful blue flowers.

“What kind of flowers are these? ” Charlotte asked as she gently touched the petals. “They are so intricate, such detailed petals.

“Well, they aren’t roses, and they aren’t daisies….and that is about my limit of knowledge of flowers.” Bridget offered.

Ellen did have more knowledge of flowers than that, but she wasn’t positive what they were either. 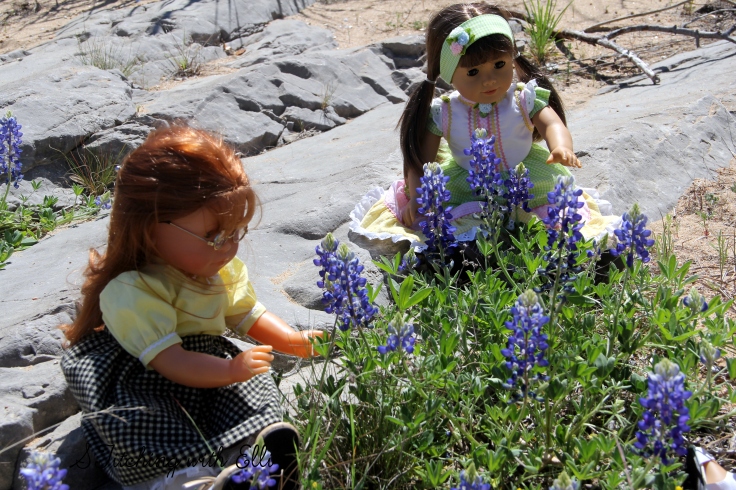 It was Marie- Grace that had the answer. “They are called Blue Bonnets.” She said in her gentle little voice. “Texas is famous for them, but I have never seen one in person before.” 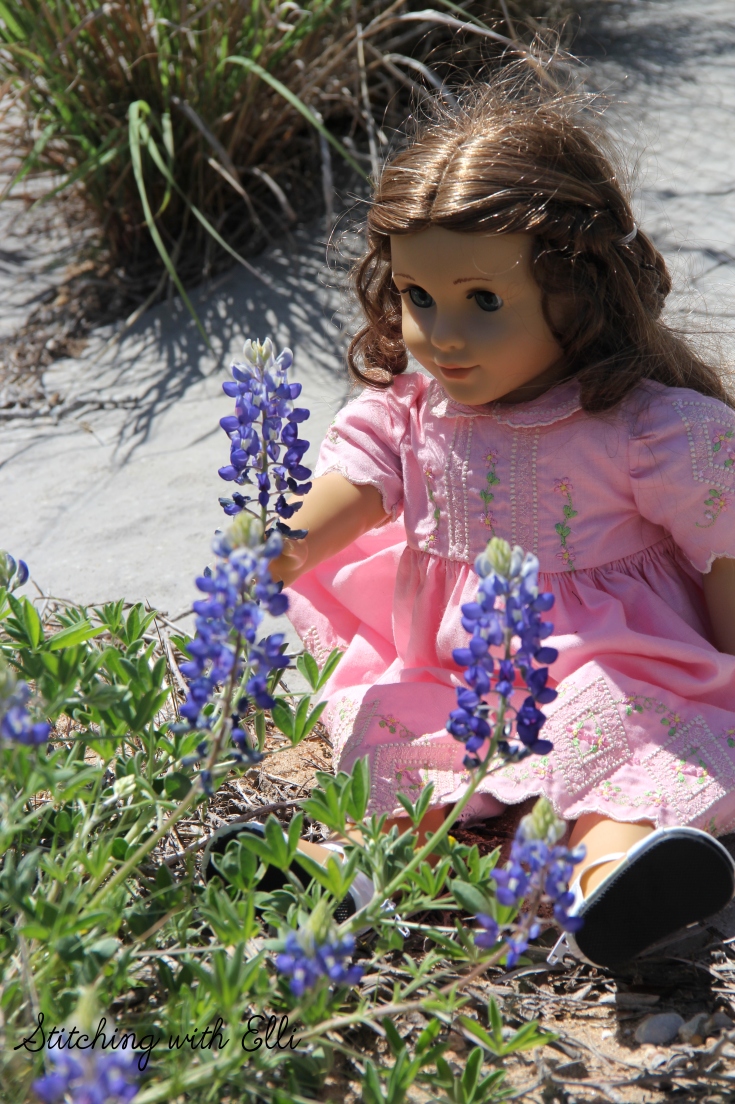 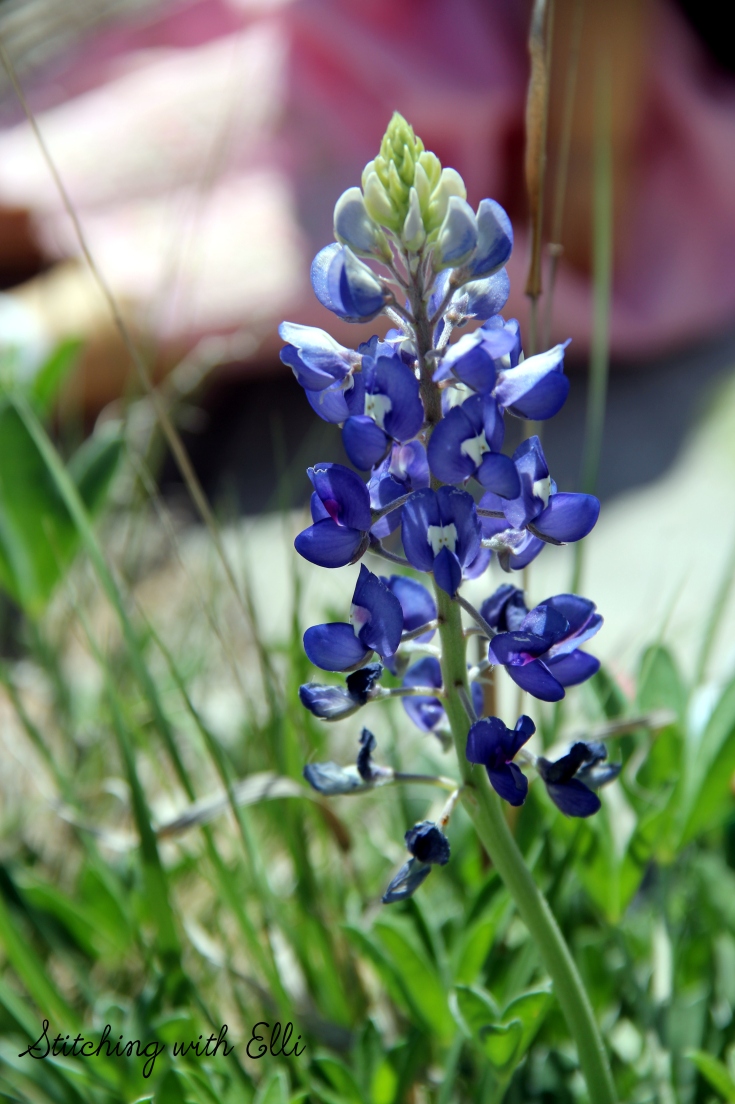 The dolls all decided that Emily should definitely plant some of these in her garden. They would be a lovely contrast to her roses!

By the time they had climbed over all the rocks and back up all those stairs they were very tired little dollies. They went back to camp and tried to set up their new tent.

“Tents are very confusing!”  Charlotte stated emphatically. “How do you know where to put all these poles and hooks and things?

The simple answer to this question was that they didn’t know! After they worked on it for quite a while without producing anything that looked like a tent, Bridget suggested they sleep in the camper like they did last time.

“Maybe when we get home we can have a practice run with the tent.  If we get all the dolls together, maybe we can figure it out,” Marie- Grace said hopefully.

With that decided , they had time to sit around the fire and giggle over jokes or funny stories. 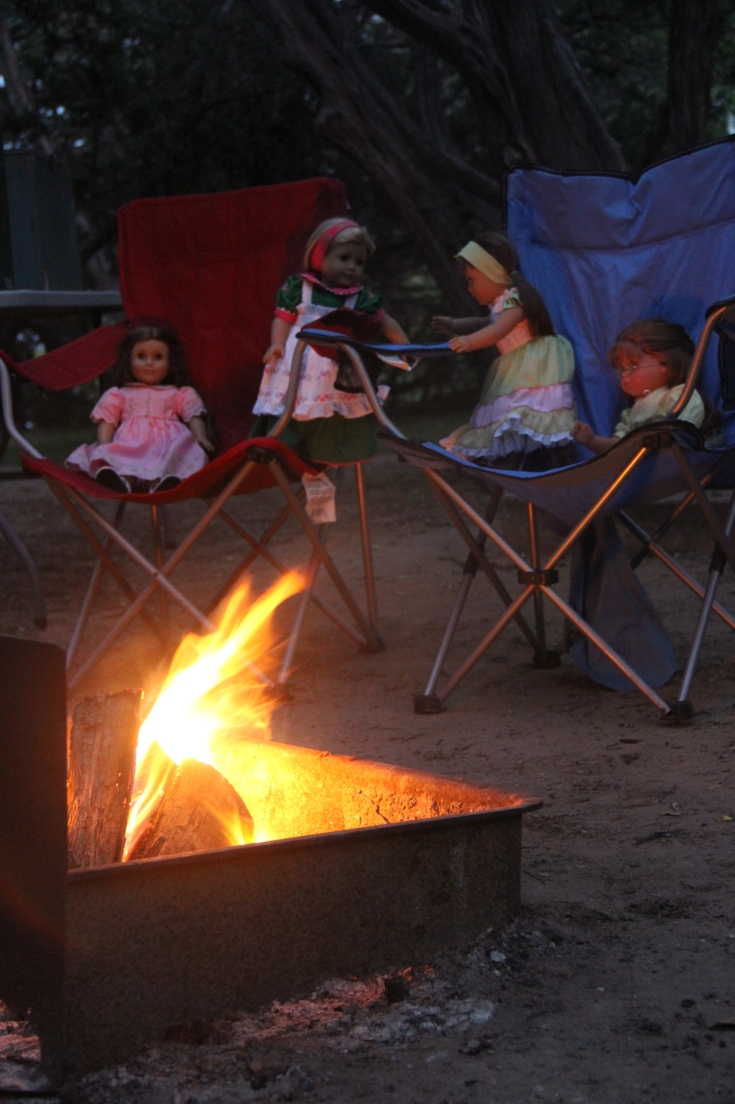 It was a lovely night camping.

The next day we headed home. but our trip to the Texas Hill country wasn’t complete until……..

We found a whole field of bluebonnets to take pictures in!! 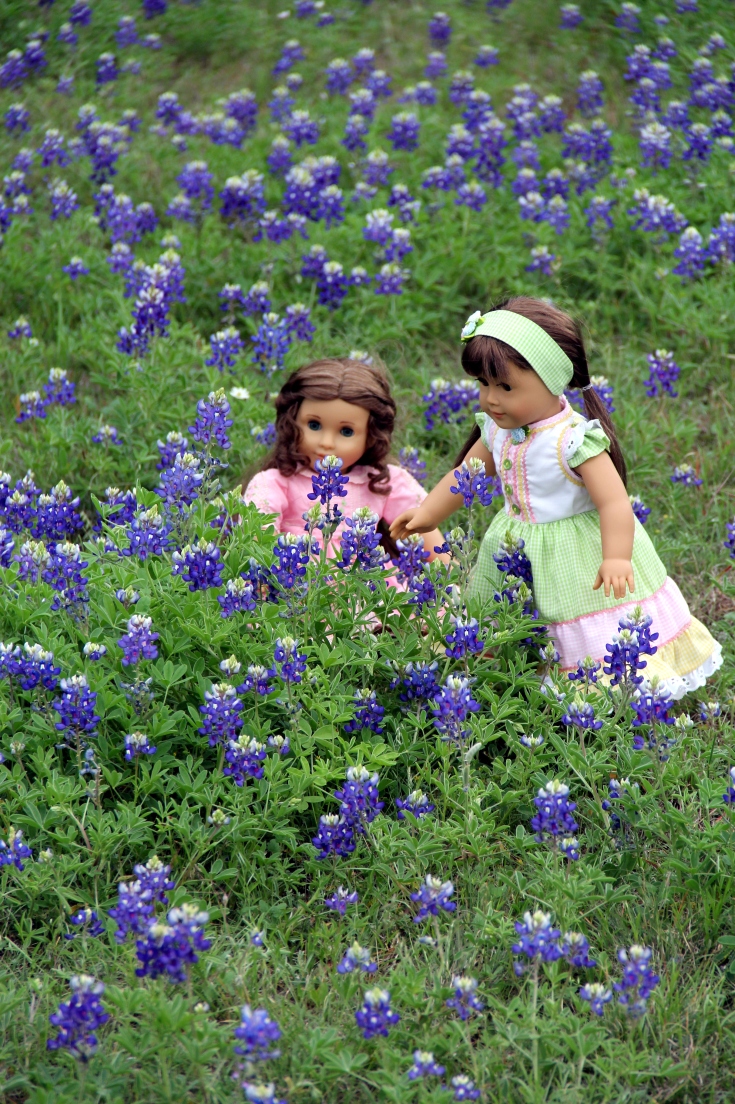 Everyone should get Bluebonnet pictures in the spring 🙂

Charlotte sighed a happy little sigh. “I’m so glad I got to come live with you all. I think it will be a lot of fun with new things to do!!”

I think she is right. There is never a dull moment with this group 😀 I wonder what they will do or where they will go next? 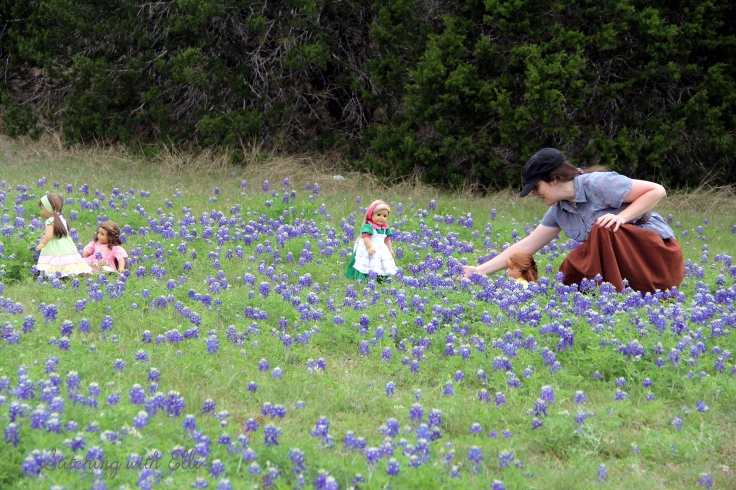 2 thoughts on “Adventure in the Texas Hill Country”