Off to more Adventures…

Bonnie, Felicity and Debbie are getting ready to go on a trip. This time they are flying not driving!

“I think you need some more help on the inside.” Felicity said as she tried to climb inside the suitcase with Bonnie. 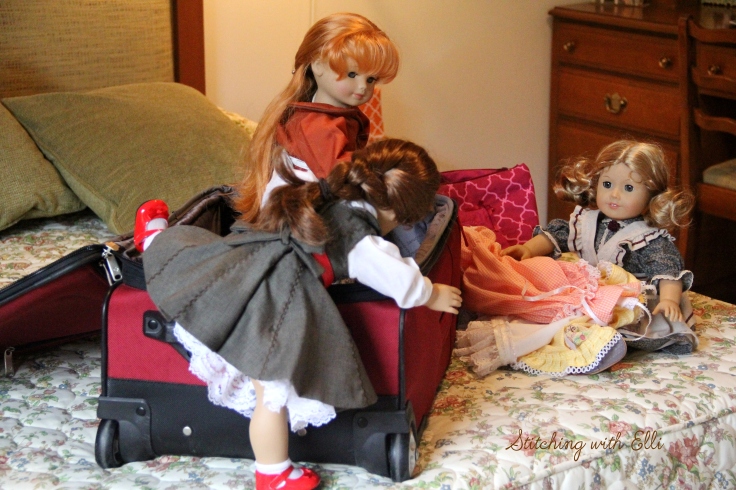 “Do you need a push?” asked Debbie. She was eyeing Felicity who looked like she was clambering over a big hurdle and struggling with it.

“No..umph..uhh… I think I’ve got it!” said Felicity as she climb over.

“All right, then have fun with that” said Debbie laughing as she started passing the nightgowns to Bonnie who was all ready in the suitcase.

“Where did Emily say we are going? and why?” Debbie asked again. She knew they told her before but couldn’t she quite remember. She was so excited she was going on a trip she kept asking about it. Originally she didn’t think she would be able to go. She was new and others had been waiting to go a trip. Emily said it would be a good way to get to know some of the other girls. Travelling is a good way to get to know each other quickly.

” We are going to Mitch-i-game! The far North!… The frozen Tundra.. the Land of the Mitten!!” yelled Felicity enthusiastically.

“What was that first word you said?” said Bonnie, startled. “I think you heard wrong. Emily said Michigan …not umm what ever it was that you said”.

“Oh…oops. I knew it was Mitchy something or other. Michigan, Michigan…” Felicity repeated it over to herself under her breath to get it firmly in her mind.

“But where is this Michigan?” asked Debbie, as she handed Bonnie the last pair of Pjs. 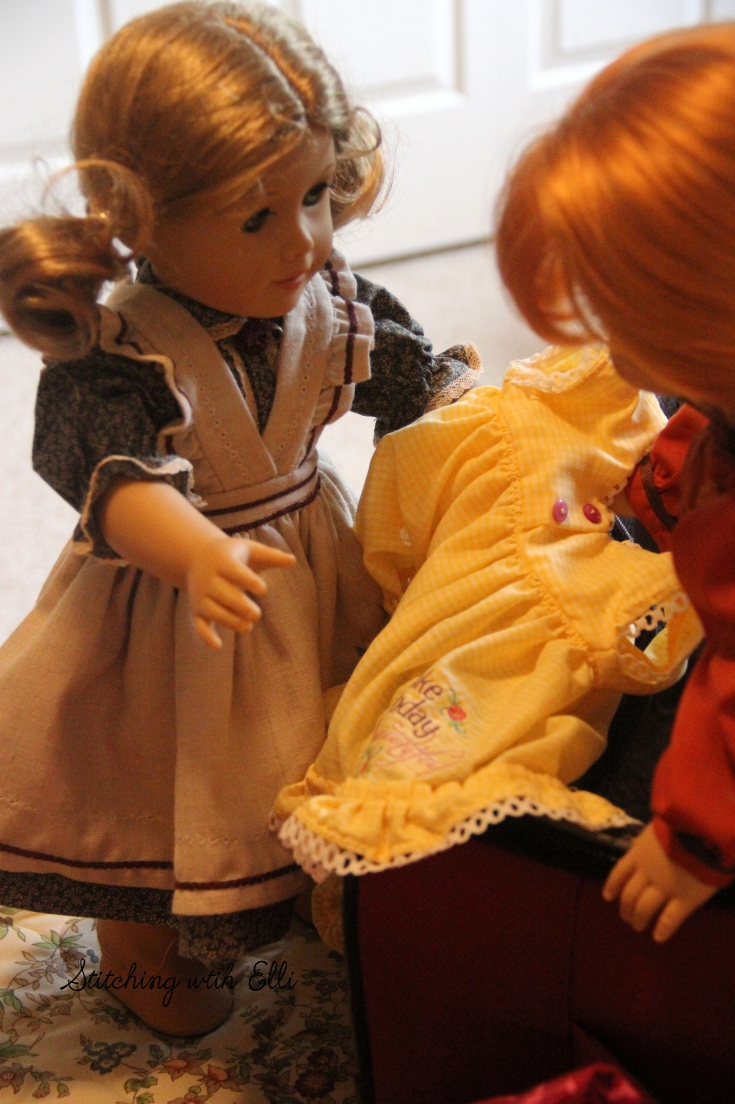 “It is up North. At the top of the United States.” replied Bonnie. “It has some big lakes around it and  Canada is above it. Is that the last of the Pj’s? Pass me the knitting bag. Emily thought she might have time to work on that in Michigan. We should pack it for her.”

“We are going to see her Grandma.” Felicity added that helpfully from the end of the suitcase. She had hopped out again to make room for the knitting bag. “Also we get to see my cousins”,  Bonnie replied, “If the trip works out right.”

“I haven’t seen a Grandma before.” said Debbie. “Bridget says she has a grandma though, so maybe I have one too. Or maybe I can adopt one?”

Bonnie said she didn’t think it worked that way.

Felicity was eyeing the open lid of the suitcase and wondering if it would work as a slide. Then she decided Bonnie wouldn’t approve and would ask her not to do it. (Besides, they  were closing the lid anyway, so the chance was lost.) Instead she asked “Where is Ellen? Wasn’t she supposed to help with packing?” 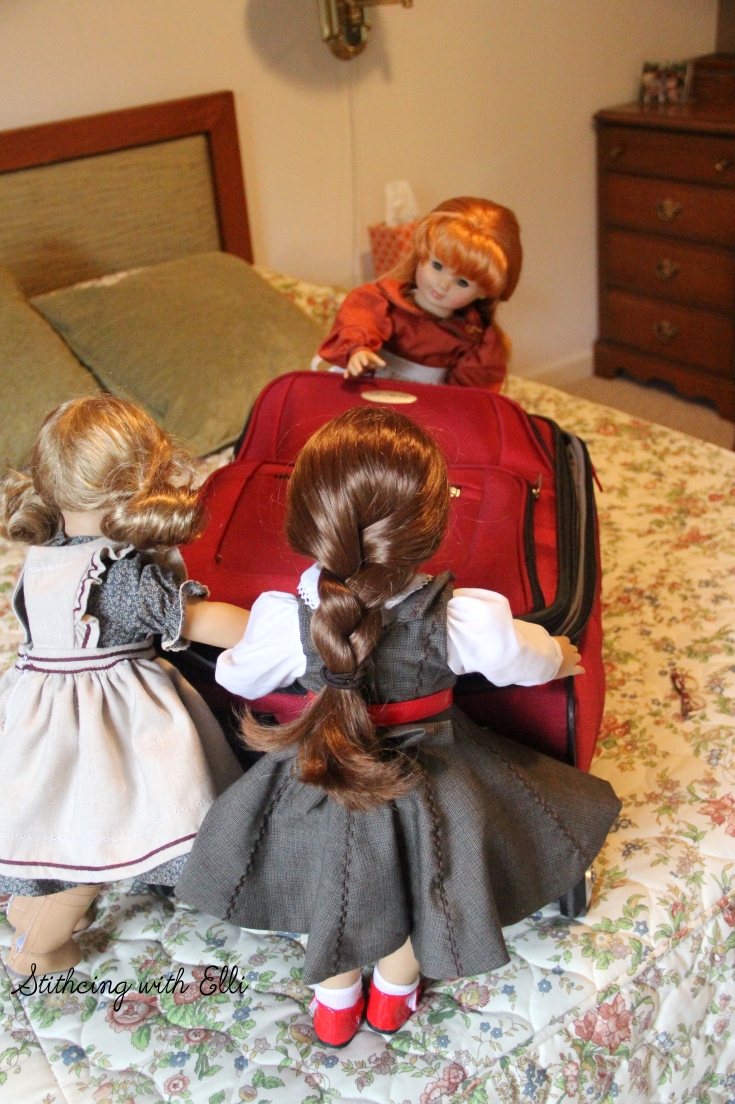 “Here I am!” said Ellen from the doorway.

” Oh there you are…umm what are you wearing? asked Felicity. 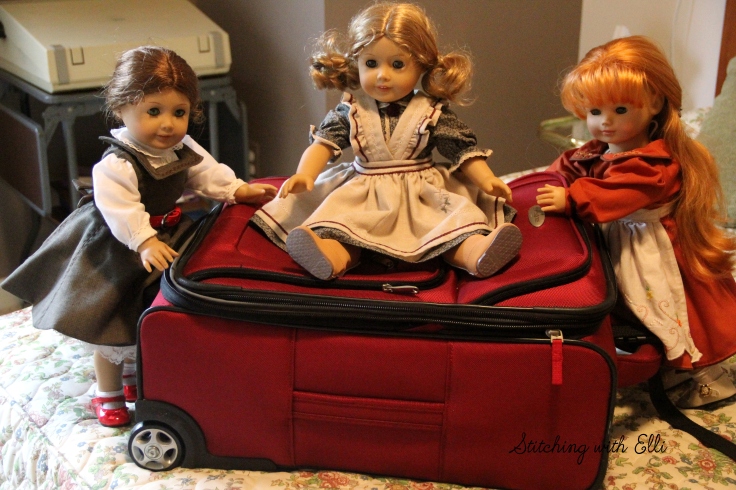 “My coat and Hat. I thought it would be better to wear them, rather than packing them”, said Ellen matter of factly.

“So they won’t get wrinkled…” she explained further as they kept looking at her.

“I don’t think you need that heavy of a coat,” Bonnie told her.

“Is it really going to be that cold? asked Debbie anxiously.

“You are going to roast!” Felicity declared.

“I looked up a picture of Michigan and there was a LOT of snow!”  said Ellen stoutly. ” I for one do not intend to freeze to death! Do you know what happens to dolls that freeze??” she asked. She looked sternly over her glasses at Felicity.

Felicity admitted she didn’t know exactly. She tried to counter the question by asking if Ellen knew what happened when a doll got too hot. Ellen was not to be distracted from discussing the perils of freezing. “They can crack and break!” she said severely. “I had a friend that knew a friend that had a cousin…. (big breath and dramatic pause)… and that cousin had an aunt who got lost in the snow!!!….She severely injured her leg! It was very unpleasant. I am not taking any chances!!”

“AHH that is awful! Emily wouldn’t lose us in the snow would she??” Debbie asked nervously.

Bonnie hastened to calm them down. “Now, now, don’t worry . Of course she wouldn’t!   “Accidents happen!” Ellen interjected, waving her arms for emphasis.

“PLUS.. continued Bonnie firmly ” There is no need to be concerned about breaking. It won’t be that cold. Emily said so….she said it was just starting to be Fall. It might be cool  at night but not freezing cold.” Bonnie told her. She held up the jacket. “See just a light jacket is all you need”.

Ellen did not look very convinced. “If it isn’t cold all the time…then why is the state shaped like a mitten!!!!”

About that time I came in  to see if they were done packing.

I attempted to soothe Ellen’s concerns. But knowing Ellen, once she gets an idea in her head….well, I don’t think she will really be convinced until we get to Michigan and she can see for herself.  She said if I didn’t mind she would like to take the coat and hat “just in case”.  I think we can manage to fit it in the suit case  😉

What do you think? Is Ellen going to need her coat and hat? 😀

5 thoughts on “Off to more Adventures…”