The dolls feel like it has been entirely too long since there has been a giveaway on this blog.  I agree with them, but  just hadn’t gotten around to doing anything yet. They told me, “no worries mate!” (I think Bridget and Debbie have been teaching them Aussie phrases 😉 ) They would take care of making something to give away.

Marie Grace and Bridget have their heads stuck together debating a pattern…. 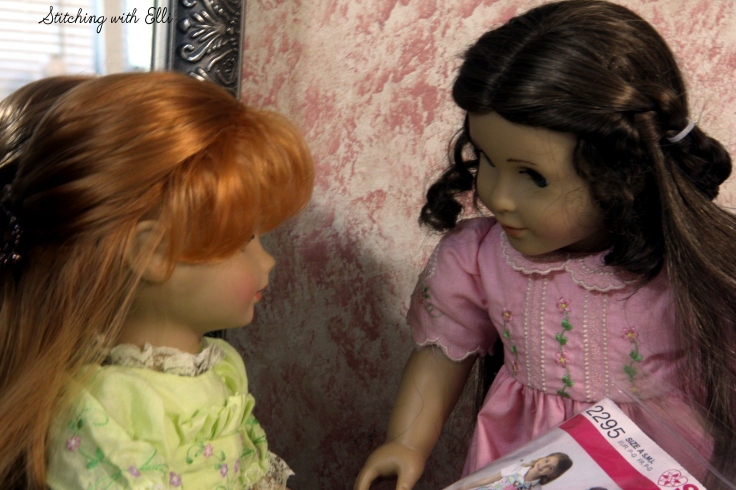 “Do you think we can do this one, Bonnie? Can you help us? After all, you’ve had experience sewing before. Didn’t you help Josefina sew a dress once? ” Marie-Grace was excited about the prospect of sewing.

” Yes, I’ve made a dress, but I haven’t  made an apron before,” Bonnie said slowly as she studied the pattern. “It doesn’t look like it could be harder than the dress I made with Lanie. Plus, it is fall now and Emily always says fall makes her feel like baking. Maybe an apron would be a good giveaway!”

They decided  which variation of the pattern they wanted to make. Marie-Grace thought just a simple apron….but then the committee got involved. Things are never simple when there is a committee. Plus, Charlotte was on the committee, and she didn’t believe in ever sewing anything simple! No sirree, it had to be cute, and perfect!  Charlotte decided this apron needed embroidery…and not just any embroidery… something fall-ish and adorable! Charlotte is a very quiet doll, until you get her excited about creating something cute…then she becomes a whirlwind of action!

Soon she was pushing buttons and resizing things on “Elli” the sewing machine.

Rose was on top of the machine threading …. 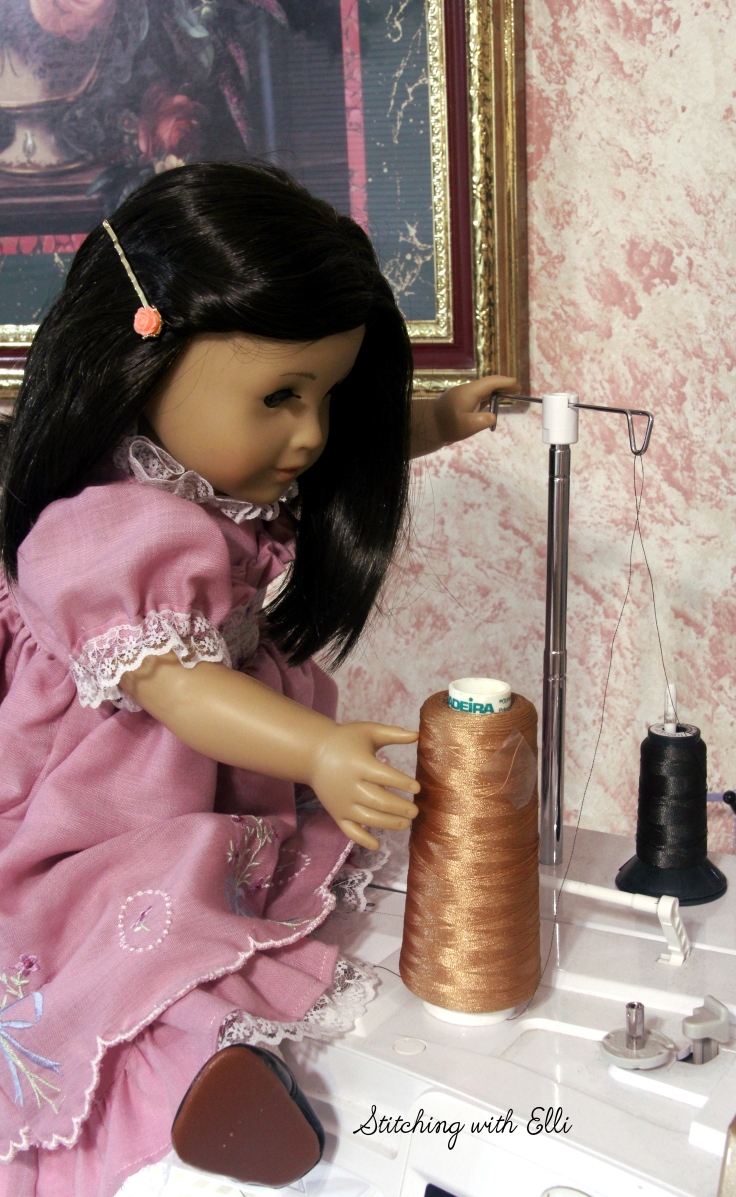 Bonnie and Marie-Grace left the sewing up to the other two and were discussing what size to make the apron…and if they should use one fabric or two….and other such important details.

The embroidery progressed nicely with only a few minor issues. Soon Charlotte was showing the others the finished product.

“What do you think?” She asked, with all the anxiety of an artist nervous to show her works to the world. 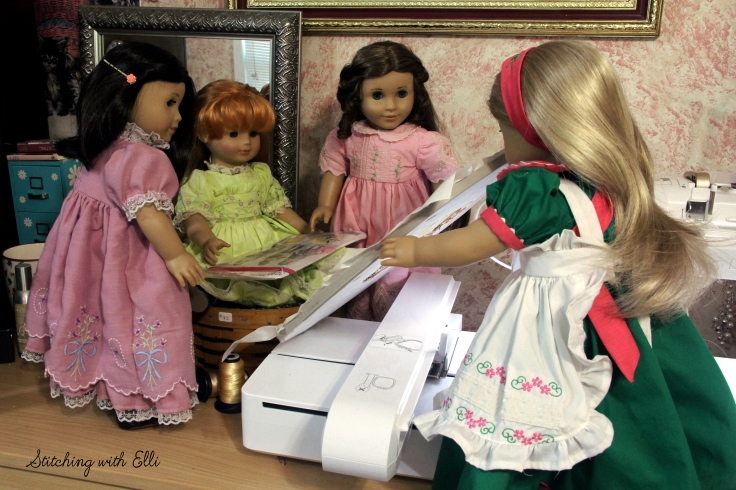 She wasn’t disappointed. The other dolls made a very satisfying chorus of “oooo!!” “How cute!!” “It’s adorable!!” “squeeeaal! It will look so cute on an apron!” … and similar phrases. 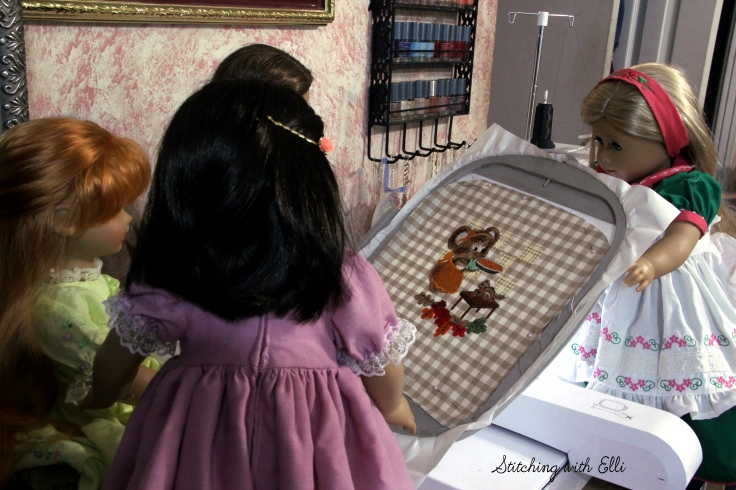 They were all satisfied that the top was going to be awesome. The next step was to cut out the rest of the pieces.

But first they had to find the correct pieces! Now this task is hard enough when you are a human. The pattern tissue paper is delicate. Once everything is unfolded is is difficult to fold back the way it was originally. …NOW imagine you are 18″ tall in which case the sheets of patterns are considerably bigger than you. The only way to accomplish this task is teamwork!

Charlotte wasted no time unfolding everything and fluffying it up so she could read the numbers on the patterns. 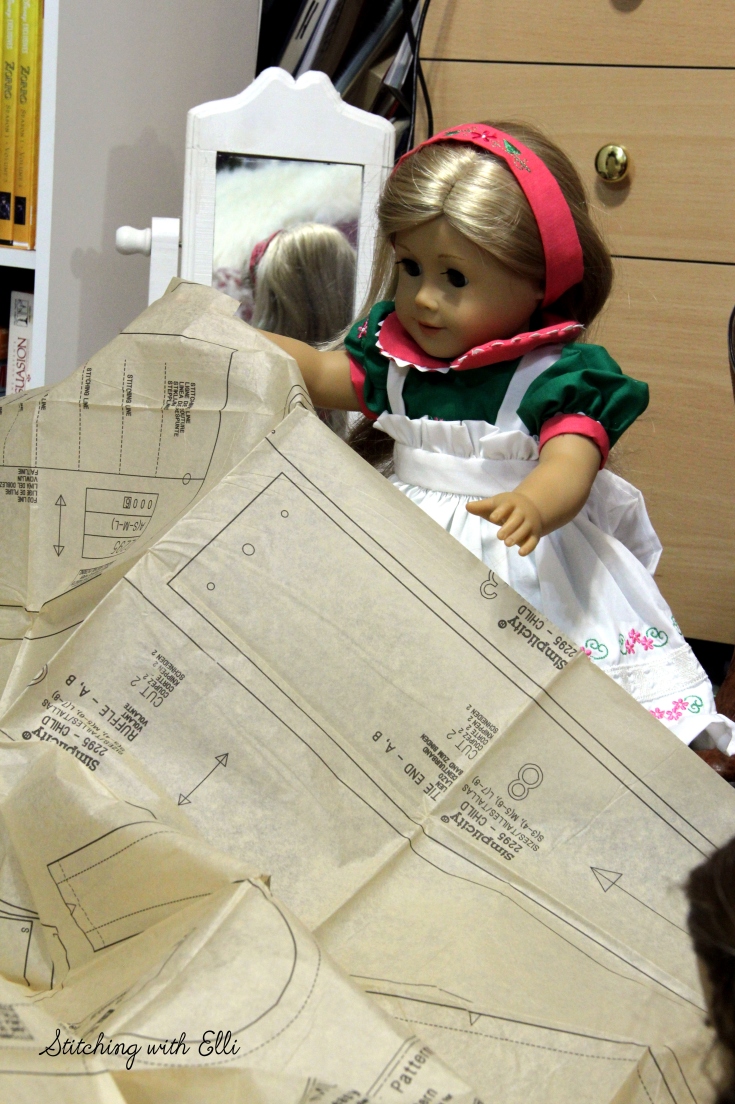 Bonnie had the pattern and would occasionally call out “yes 3! we need that one!”

Marie-Grace was also looking for pattern pieces…but she was slower and more methodical.

“OH, here is Number 4!” I found the last one!” Marie-Grace called out.

Charlotte was busy cutting….It was hard work with such big scissors!!

She was working so hard that her headband started to slide forward and her hair was almost in her eyes. But then she was done, and they moved on to cutting out the pieces.

Rose helped with the sewing. She put in the basting stitches on the ruffle. Then she had Charlotte help her pull up the thread to gather it.

“Put the pins close enough together that the gathers won’t shift. We want them to be even once we sew them.” Rose cautioned Charlotte. 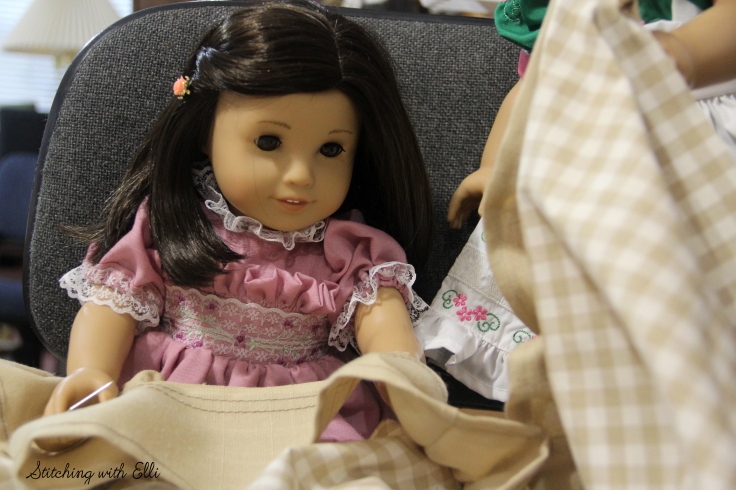 “Like this?” Charlotte held up the half of the ruffle she had finished. 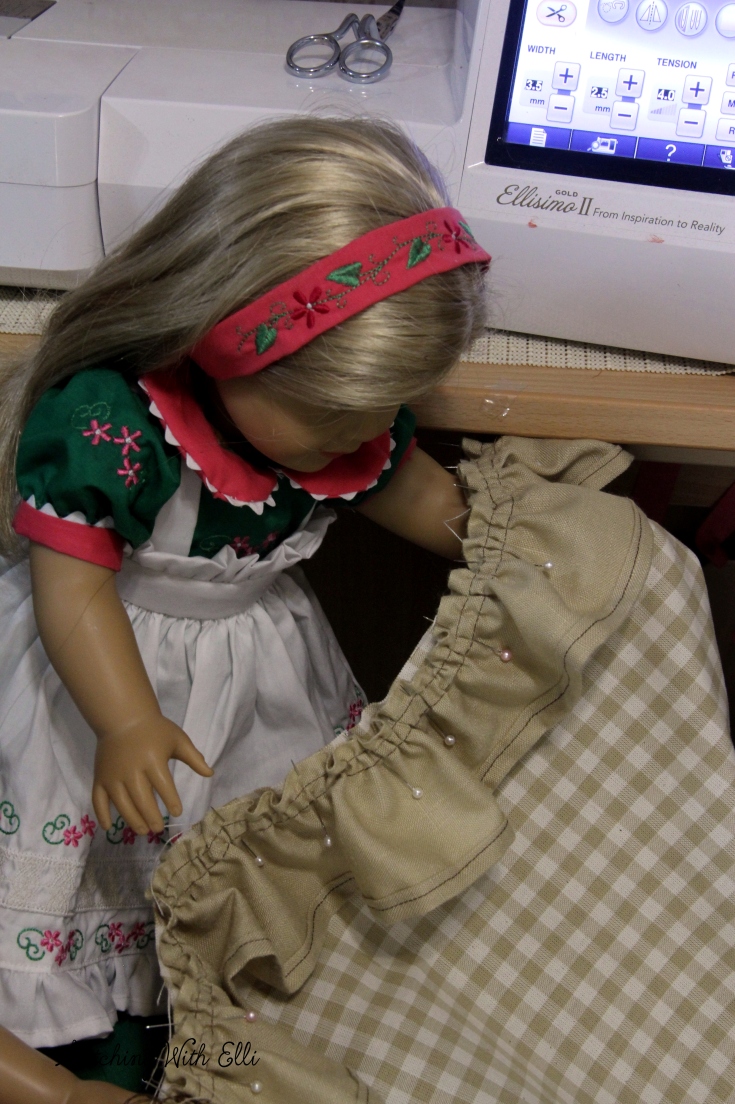 “I think so, but we had ,better get Bonnie to check it.” Rose replied.

Bonnie did check it and thought it was perfect.  She sewed the ruffle on herself.

They worked for a while, but apron’s don’t have very many pieces. Very soon Bonnie was finishing the last seam and calling out. “All done!!!” 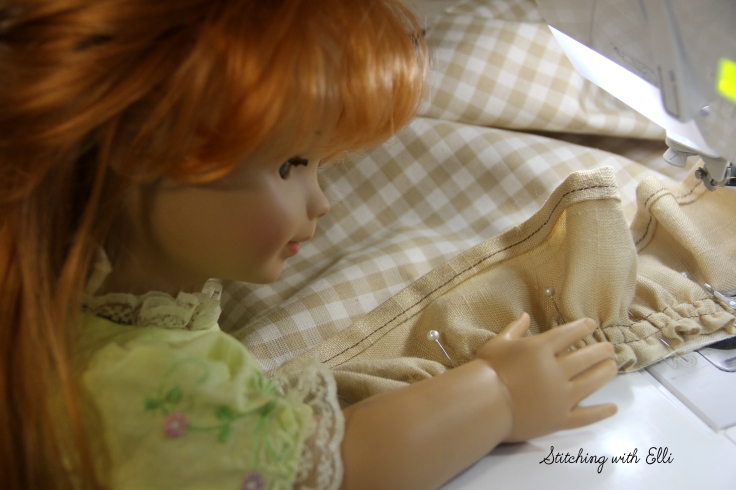 The Apron was sewn, but they still had to show it off. After all, why would anyone enter a giveaway if they didn’t know what they might be winning? They decided that to get the best possible photo it needed to be displayed on the dressform. 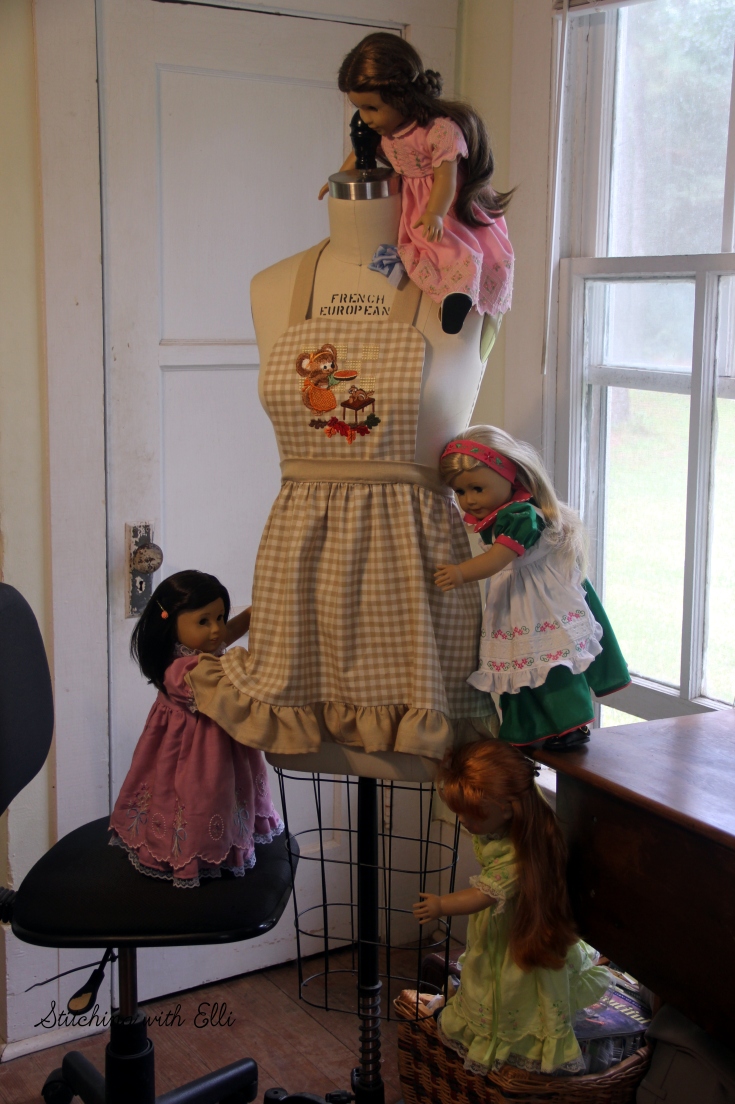 “I can tie half the bow in the back if you can get the other half.” Charlotte called from one side.

“I’ll get it in just a minute… just as soon as I fluff this ruffle,” Rose replied from the other side.

“I tied the bow that goes around the neck!” Marie-Grace was triumphant about finishing that precarious task. Now that she had finished , she surveyed the marvelous view she had from up high. Then she got distracted….  “Does anyone know why this dressform says French European? ”

Apparently no one did know, because she didn’t get an answer. It is also possible that she didn’t get an answer, because at about that moment Rose nearly fell over when Bonnie accidentally bumped her chair and it started spinning. Bonnie had been trying to avoid being stepped on by Charlotte and had jumped down. She hit Rose’s chair on the way down.

They decided a spinning chair was NOT safe for climbing, so they all (except for Marie-Grace who was stranded atop the dress form) went to the closest and got a safer ladder. Then, they finished fluffing and poking the apron until they were sure it looked perfect.

I may be a little partial, but I think they are right…It does look perfect 🙂 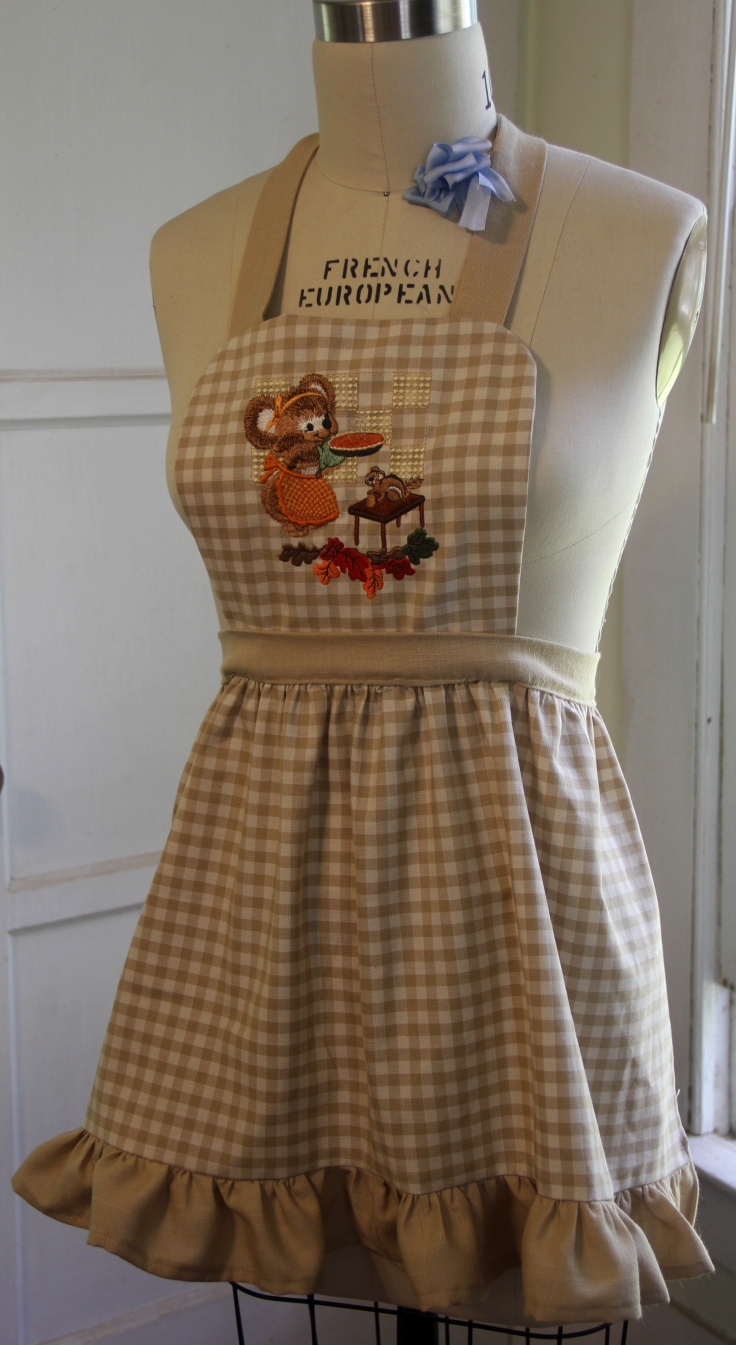 Charlotte said to be sure to tell you the design came from “A Stitch a Half”  (here is the link ). It’s one of their Fuzzy Koala designs.

Here is a close up of the cute fall design…Doesn’t this little Fuzzy just inspire you to bake?

This apron is a child’s size large…but an Adult could possibly wear it…It  is small and doesn’t protect from flour as much as a large apron 😉 Someday I’ll have a little girl, but for now I enjoying making little girl things and giving them away on this blog. So, if you would like this adorable apron (which I shall be very sad to part with and I may have to make myself another one 🙂 ) just comment below! Let me know who would get this apron if you win…or let me know what your favorite blog post is. (this is actually my 90th post so there are a lot to choose from!!) …or  let me know something you think the dolls should do next. 🙂  Comment on  practically anything to be entered! I would greatly appreciate it if you would be willing to share this post and tell others about this blog as well. Thanks so much for reading!!