Felicity and Nellie were reading a book, and as often happens when reading books they got a great idea. The story was by Tasha Tudor and called “A Time to keep” the dolls just loved Tasha Tudor books because they had such gorgeous pictures. It was a picture that captured Nellie’s imagination. “Oooo isn’t that lovely, Felicity?” she said.

“That would be so special to have your cake float down a river like that” sighed Felicity. 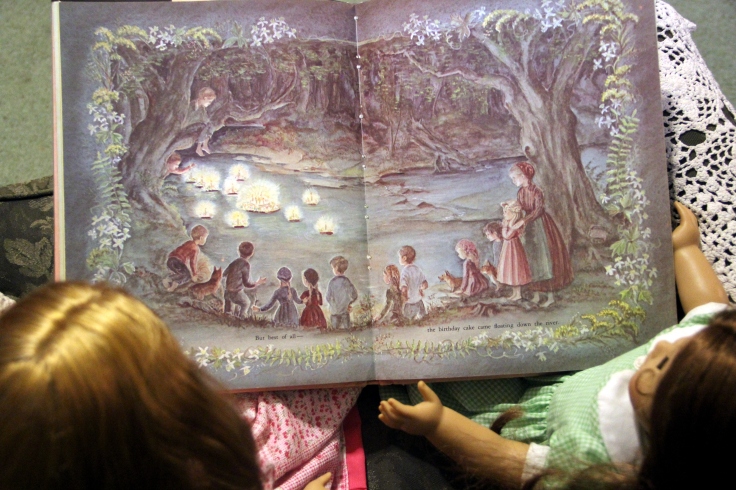 Then they stopped and stared at each other…both getting the same idea at the same time. “our person’s birthday is today!” squealed Nellie ” It’s Emily’s Birthday! Let’s make her a cake and float it down a river!!!!” shouted Felicity.

They scrambled off the chair, dragging the book, to go tell the others their grand idea.

The first one they found was Ellen.

“Ellen! Ellen! wait till you hear our grand idea!” they scrambled up to show Ellen the picture. “We are going to bake a cake!” said Nellie….” and float it on a river!!” finished Felicity.

Ellen pushed up her glasses and stared at the picture. 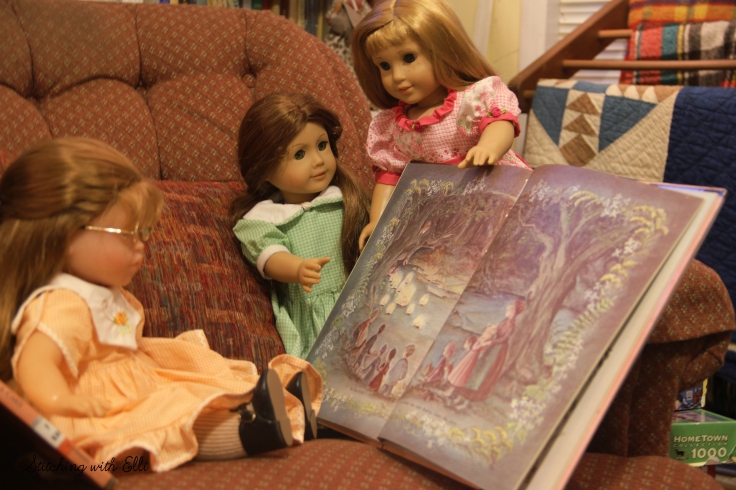 “It is a  fun idea….” she said slowly…..”But there are two problems. In the first place we don’t know how to make a cake…. and in the second it has been raining a lot lately but we do NOT have a river”

Not to be discouraged, Felicity said “I know, but we thought we could float it in the pool!” “and  and we can learn to bake a cake!” said Nellie “It can’t be that hard.”

“But what if it gets stranded in the middle of the pool? or tips over? And yes baking a cake can so be difficult…look at this!” and she pulled out the book she had been looking at. It was called “Duchess bakes a cake”

The other two stared at the book as Ellen motioned to it. “this person in the book wanted to bake a cake and look what happened to her! she started rising up to the ceiling!”

“oh” said the others properly impressed by the potential seriousness of this situation. They felt rather deflated.

About then Josefina and Bonnie came up. The others told them  what they had been discussing.

“Oh making cakes isn’t that hard.” said Josefina casually. “Our person, Emily used to make one a week. I never saw her rising up to the ceiling so I don’t think it is that dangerous”

At that  news, They all  perked up and became excited again. A bonus to the idea was they had just gotten some new kitchen aprons and they wanted to try them out! The floating the cake part was voted down as being unpractical.   As Ellen pointed out they didn’t want all their work to be capsized.  After much excited discussion, they decided Ellen was in charge of reading the cake box directions…

Elizabeth and Lanie were to get the eggs… 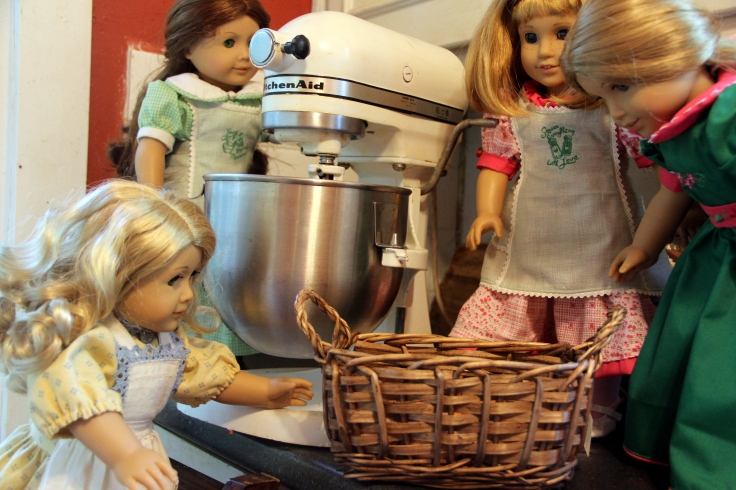 “Now for the oil and water!” said Felicity “we are almost done”.

While they were working on that, Josefina drafted Lanie and Elizabeth to help her wrap the pans with wet rags. They were a bit confused why they needed to do that. But Josefina explained that it was so the cakes would rise evenly. Lanie was very impressed Josefina knew about it…but she explained she had seen Emily do this lots of times. 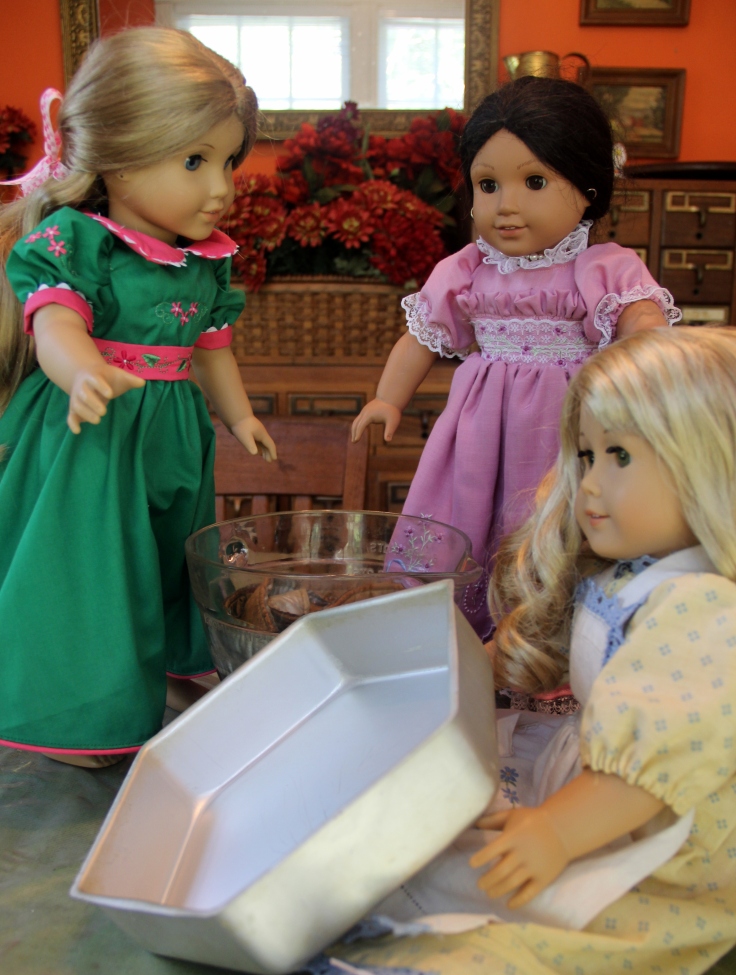 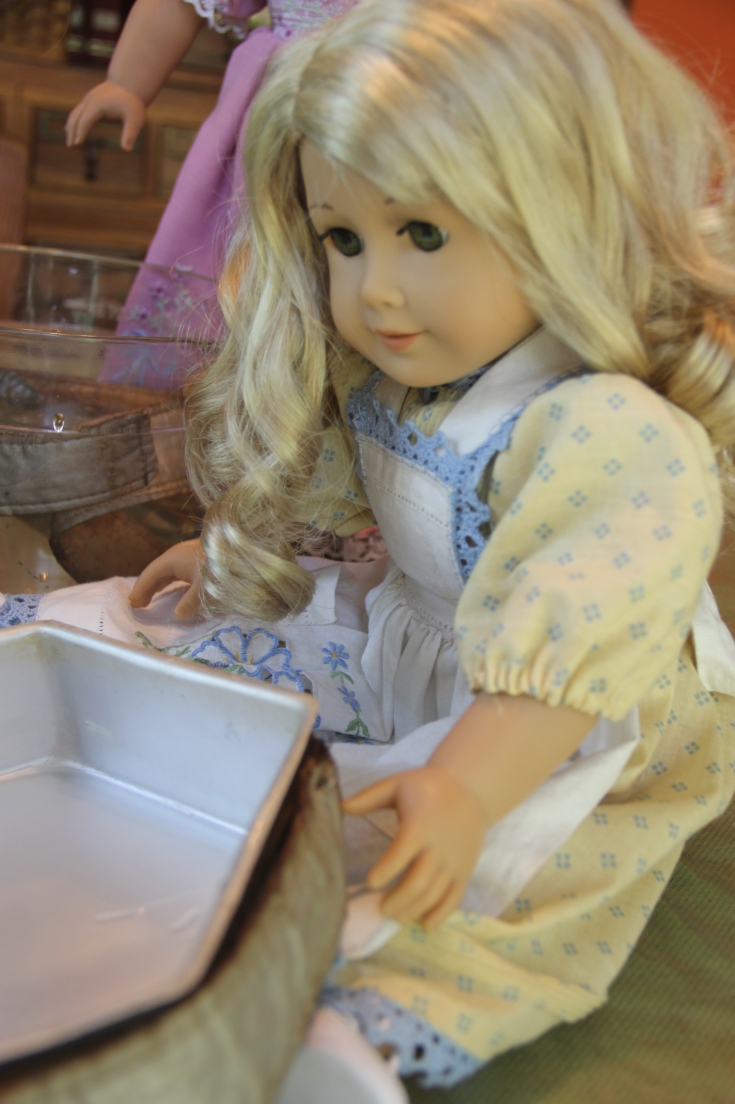 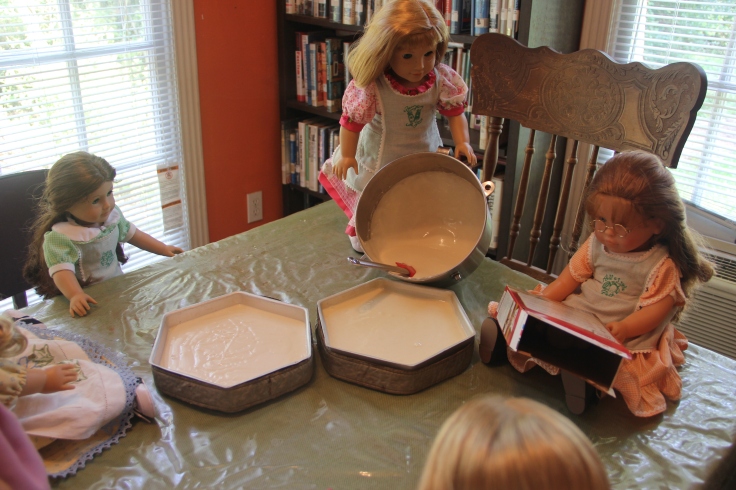 Oh no there is too much batter!

“Uh oh” muttered Ellen under her breath…”it is like duchess and the cake..” she worriedly mumbled… 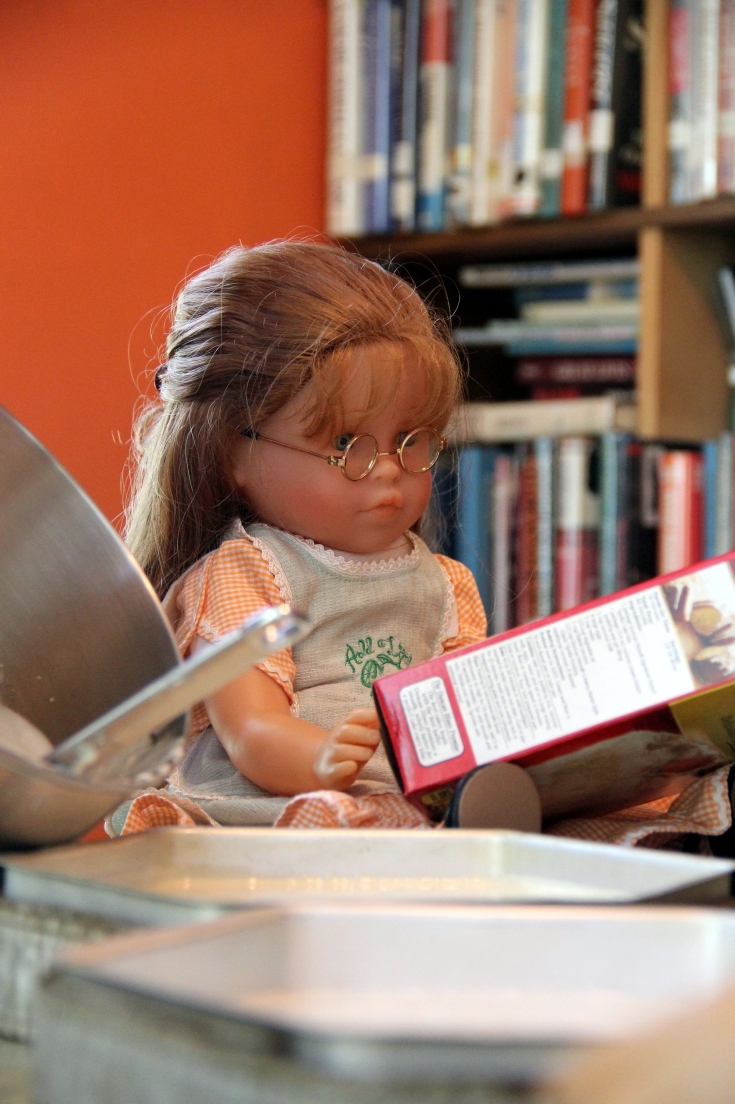 They all decided to just pour enough in the pans but to not over fill them. Then there was a fair amount of discussion about who was going to put them in the oven…since several of the dolls were scared of the oven because it was so hot! 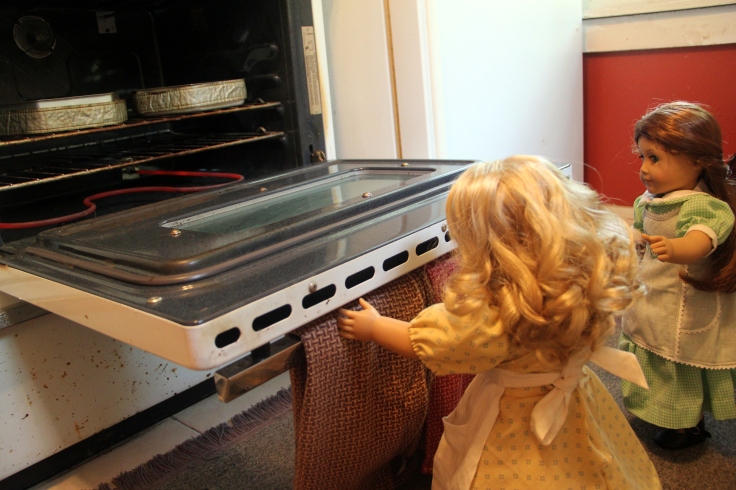 When they finished that Felicity made a discovery. “Look what I found!” she called  struggling to climb up to the table…

“Small pans for the extra batter!

“Hurray!!” shouted everyone. Problem solved and the cakes were  all done! Now to wait for them to bake. While they were waiting for it they decided to look at a book of cakes to pick a design they like.

“Oooo lets do that one!” Lanie said excitedly…it is so gorgeous and pink! 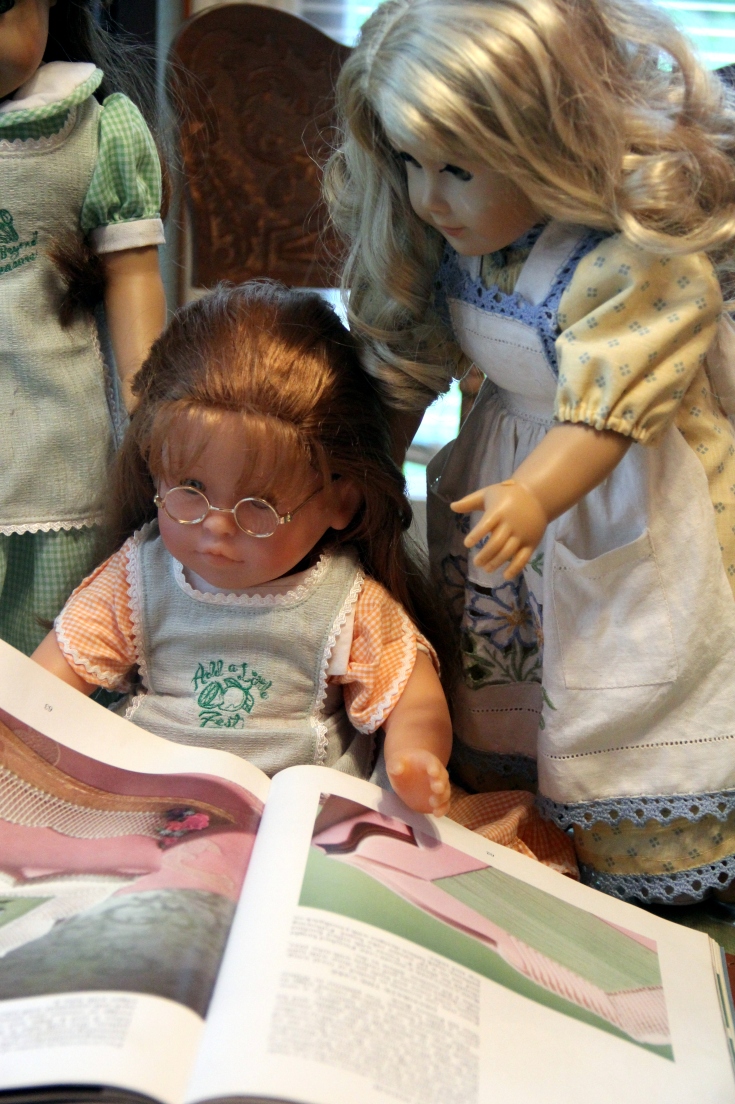 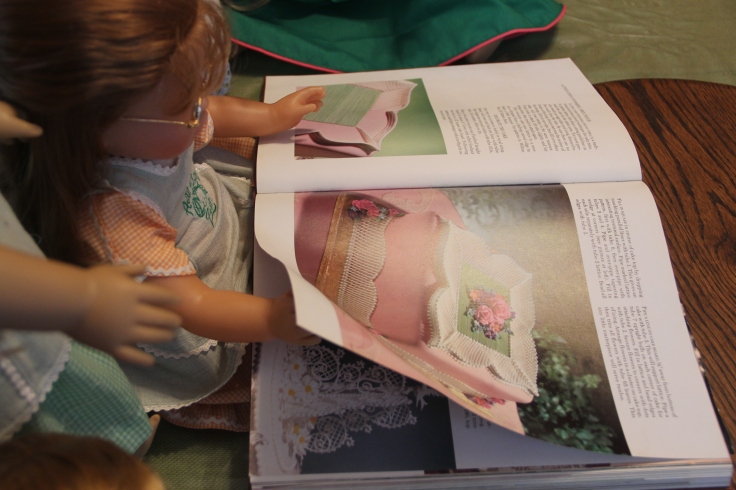 In the mean time I think someone was getting tired of looking at pictures and thinking about doing something else…. 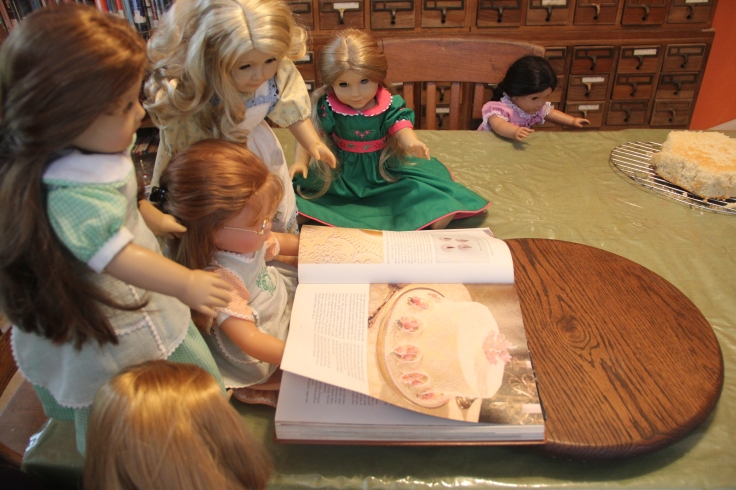 To be continued tomorrow!!!…. with part two of the dolls decorating the cake. I wonder how they will end up decorating it? What do you think what colors? any flowers? butterflies? the possibilities are endless!!

(See part 2 to see how the cake turned out )

5 thoughts on “A Birthday Story Part 1”