The dolls awoke early on their first day in Michigan. I did not. They just had to ride in a suitcase ….I had to pull that suitcase plus mine around the airport! They may be little but when there are four of them the weight adds up!

The following story was told to me after I woke up and saw the aftermath.

When they woke up, they did what anyone would do in a new place….go exploring! The first thing that attracted their attention was a big glass door with a gorgeous view beyond!!

They were fascinated by the lake and the grass.

“The grass looks so much softer than at home!” exclaimed Bonnie.

“Where? I can’t see anything!!” Ellen said. “This door is not doll friendly!”  (She greatly elaborated on this when she was telling me about it later. She outlined a detailed plan on how to make doors more doll friendly. This plan included lifts and ladders.)

“It is hard to see.” agreed Bonnie “I have to stand on my tiptoes.”

“If you back up you can see over and below it better.” Felicity advised. The problem with that was that Ellen said she needed to be close in order to see.

She then figured out that if she twisted sideways she could see around the pesky band on the door.

“Oh I see them!” she cried. “Those are Canadian geese.”

“Are you sure they aren’t swans?” asked Bonnie. “It would be so lovely if they were swans. They are such elegant creatures.”

“Quite sure.” said Ellen.

They then turned their attention to getting out. Emily and Grandma were still asleep, so asking for their help was out of the question.

The handle was way up high and the door seemed to be locked. It wouldn’t budge. This was going to be quite a problem.

Bonnie and Felicity wanted to try the “Three doll tower”…Ellen was very concerned about this idea as they had never yet been able to make that work. Things never went well for the doll at the top….. or the doll at the bottom…..or to be honest about it… the doll in the middle didn’t fair too well either.

Debbie wandered off to see what she could find to help them.

“I just need a little bit higher. Can you maybe jump Felicity? I can steady myself against the door so I won’t fall”, said Bonnie.

“I don’t think so. Can you try to climb up Ellen?” replied Felicity.

“But what if I break my glasses?? I won’t be able to see for the whole trip!” objected Ellen. “Besides, the three doll stack never works..someone always gets hurt.”

Felicity said it had to work sometime or the other as long as they kept practising…but she did see why Ellen didn’t want to risk her glasses.

While this discussion was going on, they hadn’t noticed that Debbie was still looking for something to help.

Bonnie had climbed down and they were still discussing what to do when Felicity turned around and let out a little shriek! “What is that!!”

“Watch out!!” said Ellen with an echoing shriek.

There was a large object approaching to squish them!!

It was just Debbie with a rolling footstool. This turned out to be an excellent tool for reaching the door. Felicity took the position of navigator and directed them…and the others pushed. 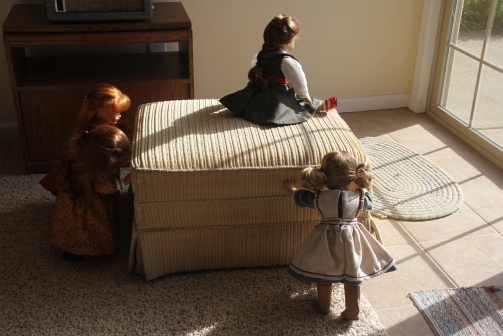 After that it just required a bit of jumping and stretching….

and shoving to hold the footstool in place…and to push the door…and to keep Felicity from falling!

And they had the door open!! They crowded around once they got the footstool out of the way.

“Do I need my coat? Is it cold??” was Ellen’s first question as the door was opened.

To Ellen’s great surprise, it was actually warm and pleasant. 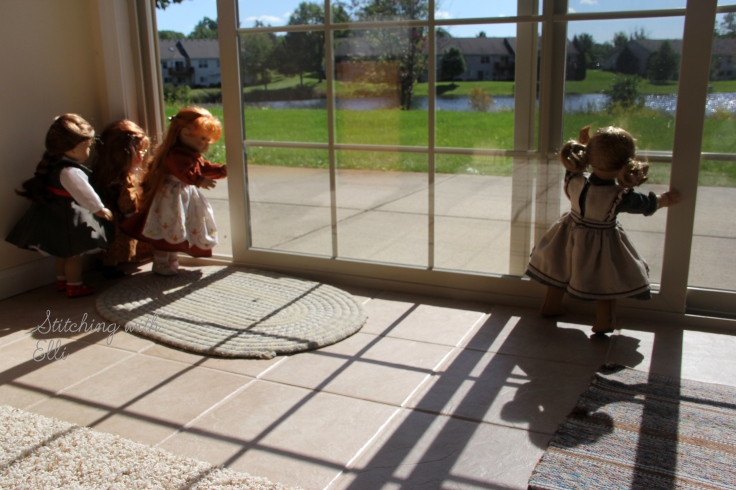 The grass was a little high for their short legs but it was so soft they didn’t mind.

They ran around on the lawn for a bit. Then they settled down to watch the lake and the geese. Bonnie wanted to take a nap. 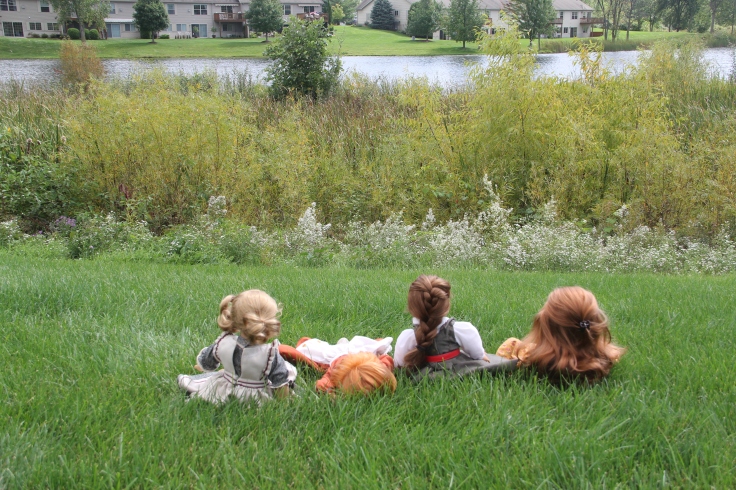 “Can we go up to the water? Do you think that would be all right?” Debbie asked.

They decided it would be all right if they were careful. They woke up Bonnie and went down to the lake.

Felicity wondered if there were any alligators or similar things that might bite…which made Ellen back up and not go as close to the water. 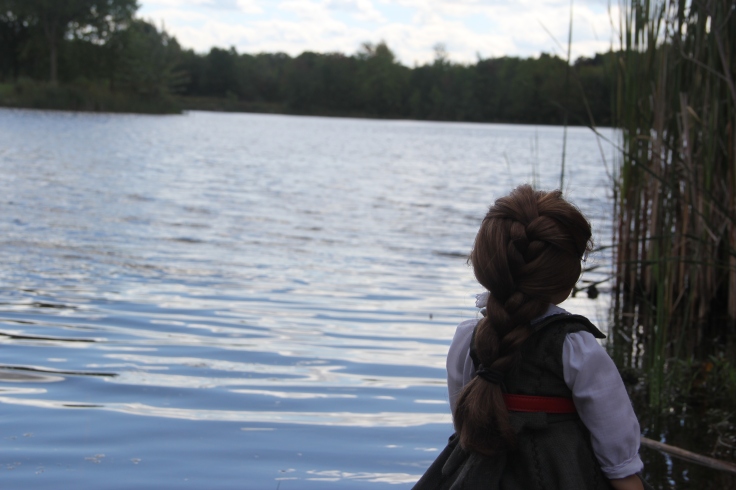 Debbie, however, was inching toward the water… 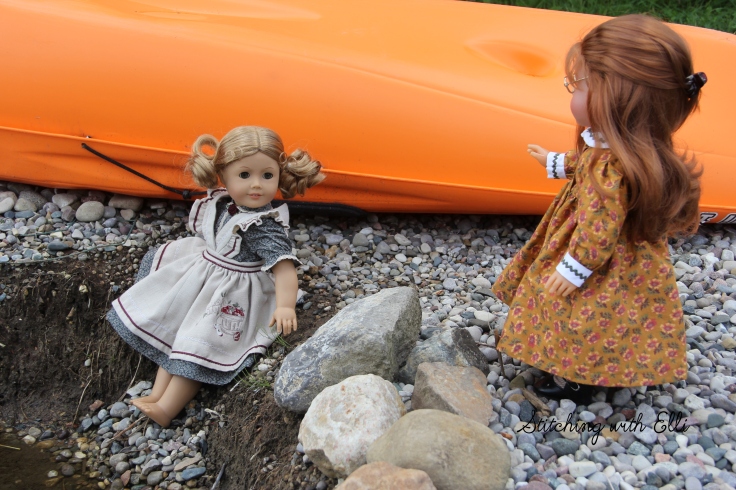 Ellen warned her to be careful of biting things.  Debbie said she wanted to know how cold the water felt. 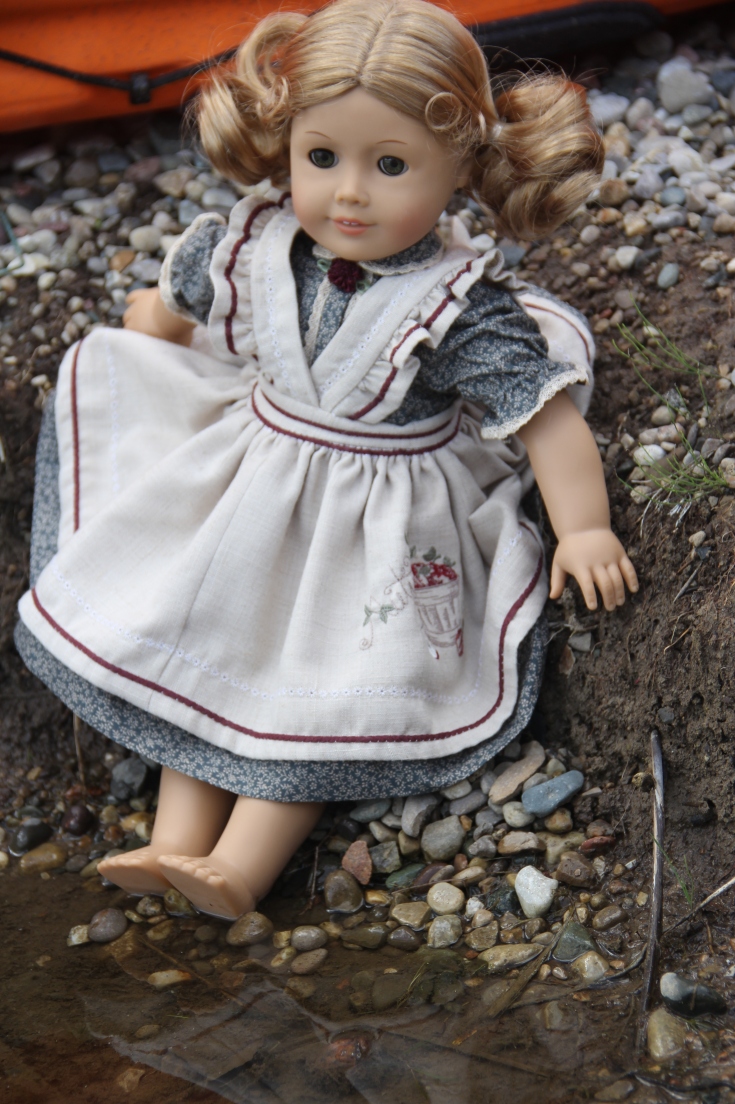 She said it was cold but not too bad.

They were walking back to the house when there was a yell from behind them.

It was Felicity! She was all wet!

” I slipped! I didn’t even think I was that near the water.” Felicity said mournfully. “What will Emily say?? is my dress ruined?” 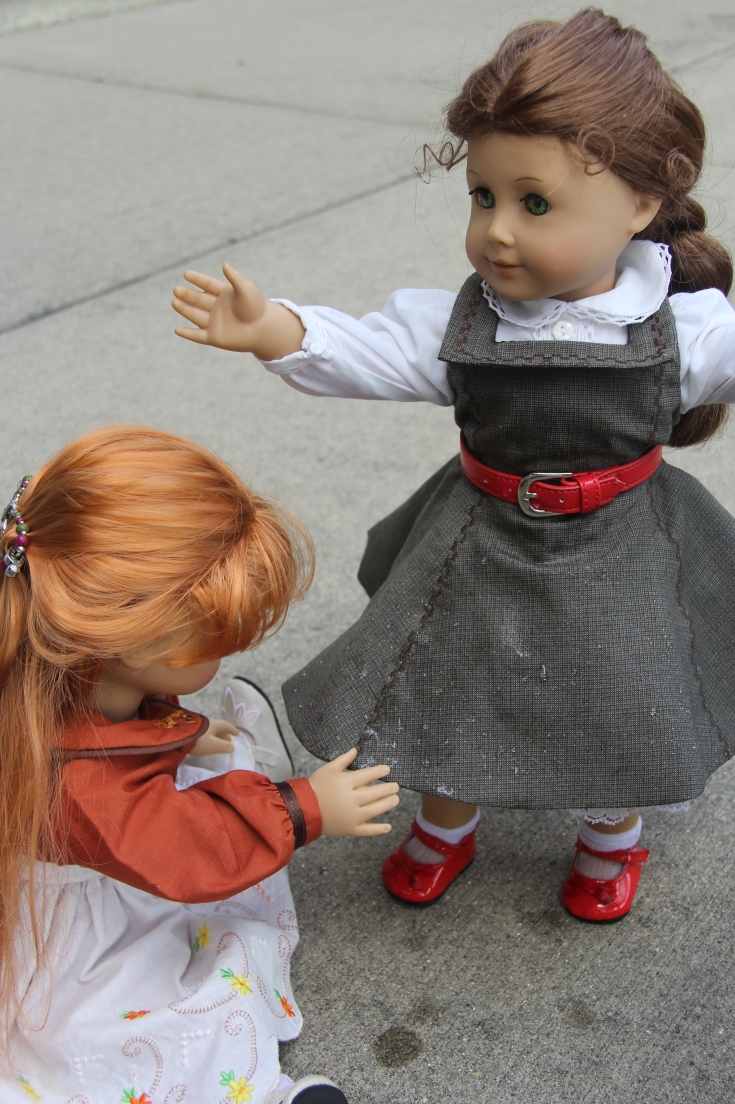 “The dress is okay” the others assured her. “Emily will just be relieved you didn’t get hurt” said Ellen. “Maybe it wasn’t a good idea to come outside without her.” Frowning, she thought maybe she had been irresponsible. She should have thought of possible consequences and stopped them.

When I woke up, I found this sitting on the edge of the bathtub…. 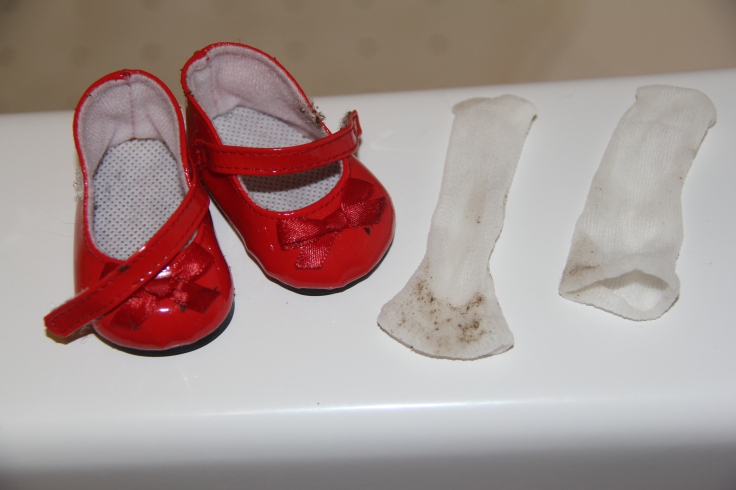 ….. and saw Ellen anxiously wrapping Felicity in a towel, fussing like a mother hen. She was murmuring concerns about Felicity getting sick from cold…. 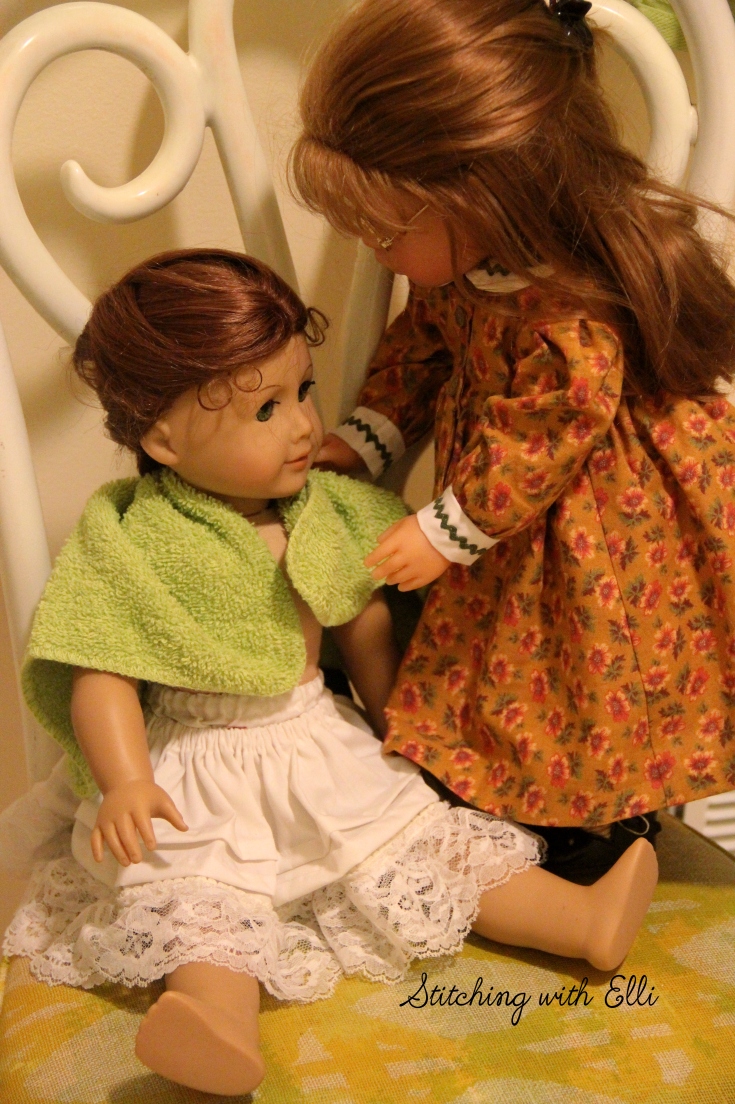 …and at the sink, Bonnie and Debbie were scrubbing Felicity’s clothes…. 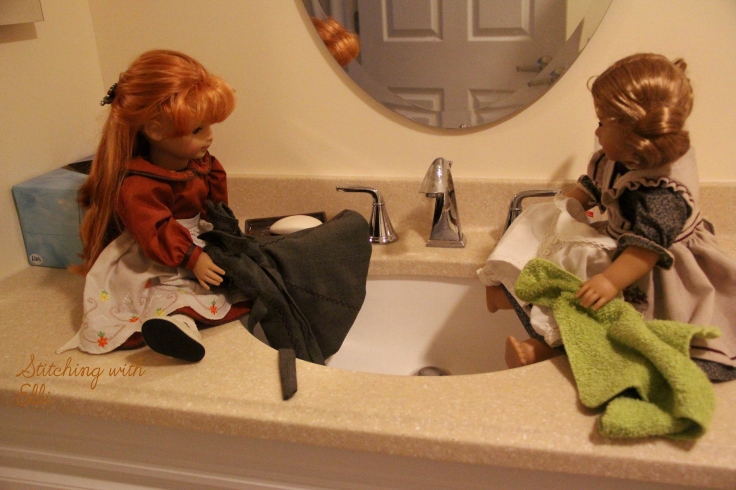 Oh my,  What a busy morning those dolls had!!

Did you ever get in to trouble before your parents got up when you were young?

7 thoughts on “An Escape….and a Catastrophe!!”